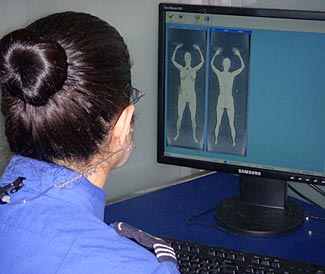 The good news?  The TSA is assuring Congress that over 15 million x-ray body scans have now been performed on passengers without any malfunctions putting the screened passengers at risk of an excessive dose of radiation.

So we can all relax?  Well, unfortunately no, and for several reasons.

First, there’s a massive difference of opinion between the TSA and leading radiologists as to what constitutes a ‘safe’ dose of radiation in the first place.  Some scientists believe that even if the machines are working normally, each time you are x-rayed gives you a more substantial and more dangerous dose of radiation than the TSA claims to be the case.

The second reason is because it is unclear how the TSA would know if one of these machines malfunctioned and started delivering mega-doses of radiation.  What real-time testing and monitoring do they carry out?  Or do they just rely on a light on the machine staying green rather than turning red – an unacceptable level of monitoring and control.

It is worrying to also note a 2008 report by the CDC that found the TSA and its contractors had failed in the past to detect when some baggage X-ray machines were emitting excessive levels of radiation or had safety features that were missing or disabled.  Needless to say, the TSA says those problems have now been corrected, but one wonders what else might be improperly configured or monitored.

One could also wonder why the TSA doesn’t allow its own staff to wear radiation dosimeters to measure the ‘leaked’ radiation they are receiving.  If you’ve ever had any sort of X-ray, you’ll know that the staff who operate the X-ray machine hide behind a screen when the machine is activated, and usually wear X-ray dosimeters too.  TSA staff neither have a screen to safely shelter behind nor any type of dosimeter to report on their own accumulated X-ray exposure (perhaps because the TSA fear that doing these things would send ‘the wrong message’ about the alleged safety of these radiation machines to the public).

Which leads to the headline of this item.  Two months ago, Congress asked to see radiation inspection reports for the new X-ray machines.  The TSA has yet to release these to Congress, because it is – or so the TSA says – still trying to ensure that the reports don't contain any ‘sensitive security or privacy-protected information’ .  They expect releasing the data ‘within the next few weeks’.

The chairman of a House oversight committee on homeland defense calls the delays "inexcusable."

"The public has a right to know, and there isn't something so sensitive that requires holding it back," said Rep. Jason Chaffetz, R-Utah. Chaffetz has sponsored legislation to limit the use of full-body scans.