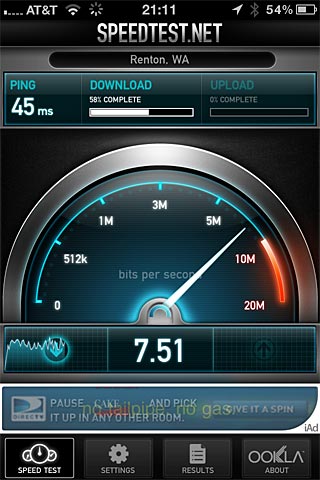 I've always said that AT&T has been given a very unfairly bad reputation by people who complain about what they perceive as poor data connection speeds on the AT&T wireless network.

Independent testing has shown mixed outcomes in the past, with some results suggesting AT&T to have the very best network for coverage, reliability and speed, and other results not being so positive.

It has seemed that the biggest problem with AT&T has been neophytes who bought iPhones and expected as fast or faster internet interactivity with their iPhone as they enjoy with their regular computers at work and at home.  These unrealistic expectations make it impossible for AT&T to live up to what people believe they should experience.

For sure, AT&T has had some real problems too, occasioned by the explosive growth of demand for their network by the repeated tsunamis of new iPhone users annually, each time Apple releases a new iPhone model.  The amount of data use by iPhone users exceeded everyone's wildest projections and AT&T has been more or less perpetually on the back foot, struggling to keep up with the demands on its service.

Anyway, with that as background, we all know that Verizon too is now selling iPhones.  This allows for the closest thing to a direct comparison that is possible between the AT&T and Verizon networks – by testing iPhones on each network concurrently.

An interesting way of neutrally testing the two networks appeared in the form of a network speed test app that is available for both types of iPhones – the free Speedtest app by Ookla.

Ookla has now compiled the results of 106,000 different tests done by users of both models of iPhone.

The results show AT&T to be the clear winner.  Users averaged a 1,769 kbps download speed on AT&T's network, compared to only 848 kbps on Verizon – slightly more than twice as fast on AT&T.  For the much less important upload speed, AT&T was still appreciably faster – 730 kbps compared to 506 kbps with Verizon – almost half as fast again.

That looks like game, set and match to AT&T.  More details here.