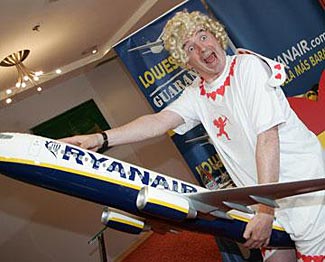 There was a great headline grabbing story early this week about how a group of Belgian student passengers 'mutinied' on a Ryanair flight scheduled to fly from the Canary Islands up to Charleroi airport in Belgium.

Now, Ryanair does not have a good reputation as being a very customer-sensitive airline, and so one instinctively wants to support the passengers.  But the facts in this case, as best they can be gleaned, tend to actually support Ryanair.

It seems that at least one and possibly several of the passengers, returning home from vacation, refused to pay an oversize fee for a piece of carry-on baggage he (they) was/were attempting to take on the plane.  As the dispute became more heated, some of the fellow returning-from-vacation students came back down the jetway to 'support' him, and other students, not yet boarded, also crowded the area, and what is politely termed caused a considerable commotion.

Eventually, the pilot radioed the police for help, and all 166 passengers were offloaded and interviewed.  66 of the passengers were allowed to reboard and take the flight after about a three hour delay, and the other 100 were left on the island.  They've been scrambling to arrange alternate – and very much more expensive, I imagine – flights home on other airlines subsequently (note to self – never pick a fight with an airline when on an island hundreds of miles from any other land mass).

Now I'm as quick as anyone to find fault with an airline.  And, for sure, Ryanair has a very long list of very expensive charges for things that some people think should be free.  But Ryanair's approach to business – really low fares combined with charging for anything and everything as extra – is no surprise to anyone who flies them (or even to many who don't).  And there's no ambiguity about an oversized bag.  It either is within the official size limits or it is not, and if it is not, you have no choice except to pay the fee that you almost certainly knew about all along and hoped you could get away with not being caught out.

One can only speculate as to the students' state of mind (and sobriety) and similarly about the apparently 100 people who joined in harassing the airline gate staff.  But they had no legal or moral leg to stand on, and in being left behind, stranded on an island far out in the Atlantic, they got their just desserts.  Well done, Ryanair.

Unsurprisingly, Ryanair – the all time masters of public relations and with an unerring ability to turn anything and everything to its advantage, ended up with the last word.  See this amusing link for details, and here's their helpful video on how to pack a month of clothing into a carry-on bag.

Talking about outrageous charges for everything, US Airways is scaling new heights (or is it plumbing new depths) in terms of how much it charges us for checked luggage.  Rates for overweight and oversize bags are both increasing, as is the cost of a third or subsequent bag.

So, let's look at what it costs now to check a third bag, weighing 70 – 100lbs, and being 'oversized'.  Because, you see, these fees are all cumulative.

And that is just one way.  You pay $950 roundtrip to check that one bag.

So think about this.  A 220lb adult might pay $320 for a roundtrip ticket on US Airways to fly somewhere.  He gets a seat, a drink, some frequent flier miles, and can bring a couple of carry-on bags onto the plane.

But if he wants to bring a third suitcase with him, his suitcase weighs three times less, but will pay three times as much as he does for the flight.  And no, the suitcase doesn't get frequent flier miles, or a drink, or anything else.

Some musicians and sportsmen pay for an extra seat on a flight and place their oversized but very precious instrument or sporting equipment on the seat next to them on the plane.  Maybe we should do the same if we have an extra suitcase.

This is, of course, yet another reason why we hate the airlines.  Sure, we might grumble a bit about having to pay any sort of fee to check a bag, but we also understand that it is an extra service the airline is providing, and which causes the airline to incur some (albeit minimal) extra cost.  At some level we recognize the fairness of paying an appropriate fee to check a suitcase.  (On say a four hour flight, the fuel cost to fly a 75 lb suitcase is maybe $4.)

But the airlines have transformed fairness into something unrecognizable when they charge three times a passenger fare for a suitcase that weighs one third what we do, and which is just thrown in the hold, jampacked up against all the other bags, and which doesn't get any frequent flier miles or drinks or any other benefits.

That is outrageous extortion on US Airways' part.  We know it and they know it, and it underscores the mutual loathing that exists between airlines and customers.  They show their hatred and disdain for us by ripping us off whenever they can with no concern for fairness or appropriateness, and we – powerlessly – hate them for doing so.

Many of us respond to such extortionate tactics by trying to avoid flying whenever possible.  Unfortunately, we all know (as do the airlines) that we have no practical choice whatsoever for flying long distances, but we definitely have choices for shorter distances.

Here's an article that reports a huge 13% drop in the number of passengers flying on flights of less than 500 miles in 2010 compared to 2000.  I'm not sure how the number was calculated – if a person flies a commuter flight to a hub, and then a long haul flight from there, is the commuter flight counted in the tally of short haul flights?  If so, the actual number of people flying on a short stage length flight and no further would have plunged even more massively than is suggested by the 13% figure.

And that's another reason why we hate the airlines.  Any time they're confronted with a positive and negative option, they have an uncanny ability to choose the negative option rather than the positive.

A progressive visionary airline (okay, so that's an oxymoron) would instead say 'if we clean up our act and make short haul travel pleasant once more, we'll be able to tap into this huge market of potential fliers that currently are avoiding us because the flying experience is so awful'.

The ugly side of airline mergers was briefly glimpsed this week when the merged United/Continental announced it would be cutting up to 500 jobs at what had formerly been Continental's Houston headquarters.  This is, however, less than 1% of their total workforce.

But to put these layoffs into perspective, other airlines are growing not shrinking.  American announced this week that it would recall another 368 furloughed flight attendants (they had recalled 545 in October, too).

Maybe some of Continental's former managers should now apply for jobs as flight attendants with AA?

And talking of both UA and AA, their shared fortress hub at Chicago's O'Hare airport might be opening up just a slight crack for new airline entrants.

Even though there have been empty gates in the L concourse of Terminal 3 lying unused at the terminal for several years, O'Hare has not been able to take them back and reassign them.  It seems the city might have finally concluded a deal with Delta (who had held the gates until now) and would end up with five gates that could be used by airlines such as Virgin America, Jetblue, or who knows who else.

Five gates is not a lot, but it would be enough for one or two airlines to at least secure a sufficient sized toe-hold as to be able to sensibly add O'Hare as a point on their route network, something Virgin America in particular has been very keen to do.

Is airline pilot training inadequate?  Has it failed to evolve appropriately, in line with the changed tasks a pilot needs to be competent with?  And has it overlooked some basic airmanship skills, too?

Here's a lengthy and somewhat technical article that tries to summarize this complex and nuanced topic.  If your eyes glaze over in trying to read and comprehend it, consider these quoted excerpts :

And if even these worrying quotes are too much, here's an executive summary.  It seems the answers to the questions posed above is uniformly 'yes'.

Lastly, some airline good news.  Delta has announced a forthcoming enhancement to the front few rows of economy class on its long haul international planes; what they are terming 'Economy Comfort' class.  The seats have 'up to' 4" more legroom, and 'up to' 50% more reclining capability, and passengers seated there get early boarding and free spirits as well as beer and wine.

I don't know about you, but I'd rather see claims made on the basis of 'at least' rather than 'up to', because 'up to' includes all lesser values down to zero.

Delta will charge $80 – $160 each way for their 'Economy Comfort' seats (less than what most airlines add for premium economy), and will reduce these amounts depending on what tier of frequent flier you are with them.  More details here.

And finally, as a reward for those of you who read all the way down to here; how about another video from the same series that was featured last week (starring the British Immigration Officer).  This one features a flight attendant and is almost as funny as last week's.