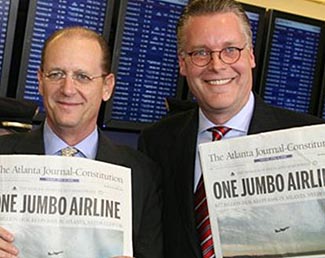 Might the future of airline ownership see the world ending up with only one single airline conglomerate, operating some number of 'competing' brands?

We have seen the first steps towards that with the common ownership of, for example, KLM and Air France.  The combined company also has majority holdings in Martinair, Cityjet and VLM, and owns 25% of Alitalia and 26% of Kenya Airways, as well as small shares of other airlines too.

Or how about in China, where the Chinese government owns some uncertain share of just about every airline based there, and even has a slice of Cathay Pacific too.

Airlines that are at least partially (or perhaps even predominantly) controlled by the Chinese government belong to all three alliances.

We have seen other attempts in the form of US carriers unsuccessfully attempting to create 'airlines within an airline' such as United and Ted, or Delta and Song, and more successful examples of this elsewhere in the world – for example, Qantas and Jetstar.

We are seeing another interesting example of this develop in the South Pacific.  You might need to read this a couple of times, because it is rather convoluted and complex.

Virgin Blue operates under four different brand names – Virgin Blue, Pacific Blue, Polynesian Blue and V Australia (the last one of which flies to the US among other places).  It can't operate any of its international airline subsidiaries using the Virgin name because this would require the consent of Singapore Airlines, which holds 49% of the shares of Virgin Atlantic.

V Australia is trying to get its code sharing/joint venture agreement with Delta agreed to by the US DoT – it has already secured Australian approval.  Delta is a member of the Sky Team Alliance, and apparently Virgin Blue has entered into talks to join the Sky Team alliance.  Other than that, Virgin Blue is not currently aligned with any of the three major alliances, but it has been very busy becoming best friends with any and all airlines that will join forces with it.  This includes frequent flier reciprocity, interlining, and other deals with airlines as diverse as Emirates, Hawaiian Airlines, Malaysia Airlines, Garuda and Vietnam Airlines.  It also code shares with United Airlines (from the Star Alliance), Air New Zealand (also Star) and Etihad (unaligned and a key competitor of Emirates).

Now Air New Zealand – formerly a direct competitor of Pacific Blue – is about to lift its shareholding in Virgin Blue to 20%.

So a prospective new Sky Team member will be 20% owned by a Star Alliance member.

And Delta – a competitor with Air New Zealand on routes to the South Pacific – will be partnered with an airline that is 20% owned by a competitor.  Additionally Delta's partner on international flights to Australia turns around and then helps Delta's competitor, United, on flights within Australia.

Oh – don't forget either that Delta competes against V Australia's stablemate Virgin America for flights within the US.

Malaysia Airlines, Garuda, and Vietnam Airlines all compete to some degree or another, and Virgin Blue has arrangements with all of them.  And Singapore Airlines similarly competes with all these airlines, as well as against Virgin Atlantic which it owns 49% of.  Oh – Singapore Airlines has also, at various times, tried to buy some or all of both Air NZ and Qantas, and these days owns a share of Tiger Airways and its Australian venture, Tiger Airways Australia.  And Qantas first owned part of Air NZ, then sold its shareholding, then was in turn part owned by BA before BA sold it, then Qantas thought it might buy all of Air NZ, or in some other way cooperate, but wasn't allowed to.

Do you see a blurring of the lines here, in terms of ownership, operational partnerships, strategic alliances, and everything else?  Airlines compete against each other in parts of their networks and work cooperatively together in other parts.

Increasingly, it is an 'us against them' situation, with all the airlines lined up together on one side of the field, and us passengers/customers on the other side.

So – how far-fetched is it to look forward to a day where the airlines are so inseparably interlocked together that we end up with a single bloc to which all airlines belong, and which controls and coordinates air fares and other operational issues.