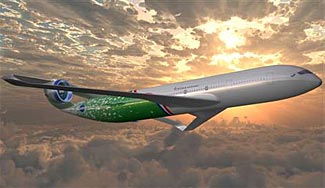 There have been some interesting airplane related announcements this week.  The most interesting concerned a large 'order' (the reason for the quotes will become apparent) when a White House briefing coinciding with Chinese President Hu Jintao's visit this week announced a new order for 200 Boeing planes, which it valued at $19 billion and said would 'help Boeing maintain and expand its market share in the world's fastest growing commercial aircraft market'.

Ummm – actually, wrong.  The 200 planes were variously ordered at different times in dribs and drabs over the last four years, and have all been long since recorded on Boeing's order books.  They have had deposits paid on them, and in some cases substantial progress payments made as well, and indeed deliveries will start later this year and be complete by 2013.

How can any person with a modicum of sense and honesty describe this as a new order or in any way timed or related to President Hu's visit?

Furthermore, it is not a $19 billion order.  It would be if the Chinese paid list price, but if they did, they'd be the only sizeable airline purchaser in the world to do so.  The actual order value is estimated around $11 billion.  Still a lot of money, for sure, but so too is the $8 billion difference between claimed value and real value.  Isn't this another ambiguity that trespasses beyond acceptable and becomes something closer to bare-faced lie?

In addition, what should we think about the claim of Boeing maintaining and expanding its market share in China?  Well, that too doesn't stand up to scrutiny.  Currently Boeing has unfilled Chinese orders for between 250 – 300 planes (including the 'new' order for 200).  But Airbus has unfilled Chinese orders for 416 planes.  So how is Boeing expanding its market share when, at least by this measure, Airbus will be delivering many more planes than Boeing?

And what will happen to Boeing's market share when China's own new airplane manufacturers start producing the airplanes and delivering them to the Chinese airlines that have already been ordering to them?

Here's an excellent analysis by the Seattle Times of the discrepancies between the White House announcement and the underlying reality.  It concludes the only new part of the order was formal government approval, but one could even debate whether or not that was new.  How could any largely government owned airline in China order, deposit, and substantially pay for airplanes from Boeing if government approval was not already secured?

One last question.  Why does the White House feel it needs to lie to us about getting airplane orders from China?

But Airbus too shared in interesting announcements this week.  Back on 11 January, it announced a sale of 180 planes to Indian airline Indigo, including 150 of its new A320neo plane, which it said made Indigo 'a launch customer'.

There's one more strange thing about this order.  Although announced by Airbus on 17 January with the opening line 'Airbus announced this morning' which seems to imply the event was immediately occurring, elsewhere the order was described as having taken place way back on 29 December.  And, making this even older news, the plan to order these planes was first announced in the middle of 2010 (at the Farnborough Air Show).

So, what happened and when, and if the deal was truly signed on 29 December, why are we only being told about it almost three weeks later?  The underlying question is moderately important, because if the deal truly did take place on 29 December, that is one thing, but if it was, shall we say, accidentally and incorrectly included in the 2010 total, then reducing Airbus' 2010 order total from 574 to 514 planes would mean that instead of beating Boeing (which recorded 530 planes ordered) Airbus would have actually lost out to Boeing instead.

It also makes one wonder, if there is such an uncoupling between order signings and order announcements, exactly how Airbus decides who ordered the 10,000th plane.

I asked for clarification from the public relations agency.  They promised to get back to me shortly (on Monday) and nothing further has been heard from them.  Does someone have something to hide?

Meanwhile the new A320neo continues to excite interest in the marketplace, with Delta very politely warning Boeing that it needs to get its 737 act together or risk losing out on an order for as many as 200 737s, with options for potentially 200 more.

Delta said it sent out requests for proposals for the replacement of some of its older narrowbodies in December; among other planes ripe for replacement are surely its 42 DC-9 planes with an average age of 34.3 years (plus another 25 that are currently grounded and not in service).  Other old narrowbody planes that Delta has include 66 MD-88s with an average age of 20.2 years and 88 757s averaging 17.6 years each.

Delta currently operates a mix of Airbus and Boeing planes, and some Bombardier planes too, meaning the airline could readily choose any supplier.  Delta says it will take up to a year to choose which new planes it will order, and signaled Boeing that it will have an uphill struggle to counter the greater fuel efficiency offered by the A320neo.  About the only saving grace for Boeing is that Delta hopes to start accepting new planes as soon as 2013 and the A320neo won't appear until 2016, so perhaps Boeing could sell some regular 737s during the period 2013 – 2016.

United/Continental is also looking to replace some of its older 737s and A320s, and is thought to be looking for possibly 100 new planes.

Talking about selling planes, Airbus has announced its annual price adjustment – well, an increase, of course – to its airplane list prices.  Planes went up in price by an average of 4.4%, but the A380 went up almost twice as much as other planes, by 8.4%, ostensibly due to the plane performing better than expectation in airline fleets, allowing Airbus to feel more confident at being able to justify a higher price.

An A380 probably costs in excess of $250 million 'on the street' these days and has a list price around $375 million.

Airbus sold six more A380s to Asiana last week, bringing its total A380 sales up to 240 – still not a huge number, and insufficient for the program to yet break even (which initially was expected to occur at 270 planes, but due to delays and cost overruns, may now require 420 planes sold).  There have been 42 A380s delivered so far, and 18 different airlines have A380s on order.  In comparison, there have been 1527 orders and 1418 deliveries of the 747 from 1969 through 2010, and probably more than 1000 of the planes remain in service.

Airbus estimates the market for A380 type planes to total 1283 planes in the twenty year period from 2007 – 2026.  Boeing estimates a more conservative figure of 590 very large passenger planes during the same period.

Another A380 order is expected shortly from Qatas Airways.  Qatar already has five on order, and their CEO said this week 'imminently we will order another large number of the same aircraft'.  One has to wonder how big a number they consider to be large – particularly because arch-rival airline, Emirates, ordered 32 more A380s last year, bringing their total ordered to 90.  I'll guess 'large' in this case might mean ten more.

In other airplane news, Boeing has now announced its latest projected delivery date for the first of its 787s – it has said the first 787 will be delivered some time in the third quarter of this year (ie between July 1 and September 30).  Anyone care to take a wager on the likelihood of Boeing actually meeting this deadline, delivering a fully ETOPs certified plane and having ANA get it into commercial service by 30 September?  I'd guess no better than one chance in two for September, one in four for August, and one in a hundred for July.

And now, at last, you're probably wondering what the strange plane illustrated at the top of this article is.  It is a futuristic concept released by NASA and created by Lockheed Martin; two other very different designs are also being showcased by Boeing and Northrop Grumman.  NASA is funding some futuristic studies.

While these are theoretically designs for planes that could be in service by 2025, with Boeing unable to decide what it will do with its 737, even in the face of increasingly urgent threats from Airbus, and with neither Lockheed Martin nor Northrop Grumman having any passenger jets in service at all, I would be very surprised to see any of these designs do anything other than soak up as much funding from NASA as can be secured.  NASA has so far given a paltry $5.3 million to Boeing, $3 million to Lockheed Martin, and a mere $2.65 million to Northrop Grumman.

When you consider that a new airplane model, with traditional design underpinnings, would probably cost in excess of $10 billion, and an innovative new design would cost greatly more, this $11 million in total funding represents less than 1/1000th of the cost of a single model new plane, or 1/3000th of the cost of each company creating a new model plane.

So what use is the funding at all?  My earlier attempt to discuss this with NASA suffered first of all when a public email address offered by NASA for correspondence on the topic didn't work, and correspondence to their general enquiries email box back in May last year brought no response whatsoever.

So I can't answer that question, but I can guess that this $11 million is close to a total waste.  Oh, at least we get to say 'wow' when admiring the three pretty pictures – you can see illustrations of all three different design approaches here.

2 thoughts on “Of Lies, Damn Lies, and Airplane Manufacturers”