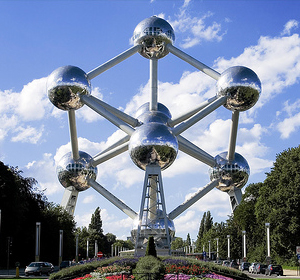 And hello from Brussels, where I'm writing this on Thursday evening.  Pictured is the 'Atomium' structure which has sort of become an iconic image for Brussels.  It was built for the 1958 World Fair in Brussels, is 335ft tall, and its nine balls depict a unit cell of an iron crystal, albeit magnified 165 billion times.

I arrived in Brussels on Tuesday, to spend three nights prior to the start of our Christmas cruise, which this year travels the Rhine rather than Danube for a change, from Basel to Amsterdam.

My flight from Seattle was with Delta to Amsterdam, connecting to a KLM regional flight for the 30 minute remaining hop down to Brussels.  The Delta flight threatened to be the archetypal 'flight from hell', due to a brat of a young boy and his hapless mother in the seat behind me.  This little boy would either scream at the top of his voice, or throw a temper tantrum that involved kicking with all his 3 or 4 year old strength on the back of my seat, and for good measure, he'd reach up and over and pull my hair on occasion.

The flight attendants tried to help control/pacify the boy.  One gave him a bag of pretzels which quietened him down for a short while, then he got bored with the pretzels and started throwing them – yes over the seat and again at me and the guy seated next to me.  So no more pretzels.

The flight attendants soon realized that rather than pacify the boy, it would be easier to drug me and the guy next to me into a drunken stupor, so they started a regular relay from business class back to us in coach class, passing back glass after glass after glass of champagne.  That was very kind of them, and while I didn't sleep a wink, the flight was about as enjoyable as it possibly could be, thanks to the friendly flight attendants.

When the plane was on its final approach into Amsterdam, I noticed an amazing thing out the window.  Our landing path was being paralleled by a train line, and there was a passenger train traveling along it.  Okay, nothing amazing there.  But – the train was pacing the plane.  Yes, for the minute or so (ie 3 or more miles) the train and plane were paralleling each other, the train was keeping up with the plane.  It must have been traveling at 200 mph or faster.

And so it was perhaps not a surprise that both the two flight attendants on the KLM Fokker 70 regional jet service to Brussels independently told me I should have taken a train instead of flown the journey.  The flight was delayed almost an hour due to a Keystone Cops disorganized approach to de-icing, and in conversation both gals laughed and said the train would have been easier and better and more reliable.  I had to defensively explain I was only on the flight due to having changed/connected from an incoming flight.

Brussels is bitterly cold and snowy (temperatures are about 15 degrees below seasonal averages, so I hope for warmer weather to quickly appear for our cruise), and it is hard to do much sightseeing or enjoy much of the outdoors when the temperature is in the low 20s and there's a wind chill factor that massively drops the perceived temperature down still further.

My sightseeing yesterday ended up with me seeking refuge in a movie theatre, where unfortunately the movie I chose was one I'd seen on a recent flight.  It was unusual to see a movie with not just one but two sets of subtitles (both French and Flemish/Dutch).

Today I went to Bruges for the day – it is undoubtedly a lovely town in warmer weather, but it was just cold and inhospitable outside.  Even some of the restaurants in Brussels were bitterly cold, including a very nice microbrewery just off the Grand Place that seemed to have the bar/restaurant at 'cellar temperature' – I had to eat with my coat on, and was debating wearing my gloves too!

Fortunately I found a lovely and warm restaurant in Bruges that I'd enthusiastically recommend to you.  Just a couple of blocks from the center of the town, 'de Vlaamsche Pot' offers traditional Belgian dishes in a lovely old building.  Good service, a great drinks list, and fair prices round out an excellent offering.  Recommended.

I'm staying at a most distinctive hotel in Brussels – the Welcome Hotel.  This is a tiny boutique hotel (only 17 rooms) and in an excellent location – there is a metro stop right outside the front door, it is overlooking St Catherine's Square, and a mere six minutes walk from the Grand Place.

The rooms are the ultimate in idiosyncratic styling, reasonably generously sized, and fairly priced.  For something other than a generic corporate chain hotel, it represents a stylish and very different sort of place to stay.  My room even has a full sized Christmas tree in it, complete with twinkling lights.

While some aspects are a bit rough – disappointing towels and amenities and not very soft toilet paper, on balance I'm very happy here and can recommend it to you if you visit Brussels.

There's not a lot else for you this week except a feature article which is a logical progression from an article I published last week.  Last week I wrote about the problems with present airport security methods – as intrusive and invasive as they are, they can't and won't find 'internally concealed' explosives.  The article attracted a great number of thoughtful comments, which you can see at the end of its matching blog entry.  Many thanks to all who added comments.

It seems only fair not just to criticize current procedures, but also to look at better alternatives for our hapless security people to consider.

And so, this week, in the first of a new four part series, I (and with much appreciated help from Israelis and US airport security consultants/experts) look first at the Israeli approach to airport security to see if it is something we could adopt in the US, a concept that many people have recently been advocating.  As always, you are welcome to add your comments to the blog entry (following).

By the way, don't forget our 2011 Scotland's Islands and Highlands Tour – a repeat tour based on the extremely successful tour we enjoyed this year.