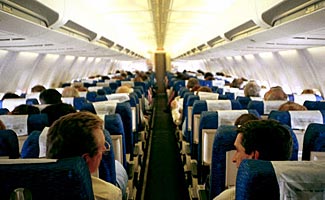 Few of us give much thought to the seats we squeeze ourselves into every time we fly.  Sure, we know they are too narrow, the rows spaced too close together, and the padding on the back of the seats often too thin.  And then there’s the recline thing – our seat never seems to recline far enough back, but the guy’s seat in front of us – whoa!  That ends up in our face every time.

But what about the safety of the seat?  FAA regulations set minimum parameters for things such as the seat’s ability to withstand the violent deceleration forces in a bad/crash landing, and they also require the seat to be constructed of materials that do not easily burn, and when they do burn, do not emit toxic fumes (more people die from inhaling toxic fumes than from the flames themselves in a plane crash/fire).

The good news is these safety standards have been steadily increasing.

Oh – the bad news?  It seems that one of the world’s major seat manufacturers has been cheating on their test results and safety compliance, and have been selling seats that don’t comply with current safety minimums.

The EU and FAA are requiring planes that have been delivered with suspect seats to have their seats inspected and possible replaced.  With potential non-compliance issues dating back as much as 15 years, that could be a lot of planes and a lot of seats.

On the other hand, the Association of European Airlines says that there’s no reason to worry, and they’d prefer not to check/replace seats at all.  They tell us that even non-compliant seats are better than seats made a few decades earlier.

I wonder if their spokesman drives a car with non-compliant ABS braking, defective seat-belts, and malfunctioning air bags?  Even that would be safer than a car made some decades earlier, too.