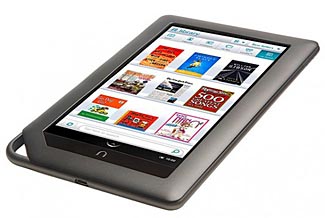 Since the introduction of Amazon's original Kindle eBook reader in November 2007, the company has very successfully driven the acceptance of eBooks into the marketplace.

Former attempts at creating a sustainable viable market for eBooks had all failed to gain critical mass in the marketplace, and Amazon deserves full credit for single-handedly making eBooks into a mass-market product with massive acceptance.  These days the number of books available in Kindle format has grown from less than 100,000 to more than 725,000 titles.

There have been positive changes to the Kindle reader itself.  The original reader was priced at $400, but in three short years, prices have plunged so that current models are available for as little as $139.

All Kindles use the 'e-Ink' technology which has as a benefit a very low battery consumption, and the ability to be viewed in strong light conditions where normal LCD type technologies would get 'washed out'.  But e-Ink also has two very important disadvantages – the refresh rate is slow, making it unsuited for showing video, and it is black and white, not color, only supporting a few shades of grey.

While Amazon pioneered the modern eBook concept, its success has drawn a number of competitors into the marketplace, stealing a ride on Amazon's success.  Most of these competitors can be ignored because they don't have access to the inventory of book titles that Amazon does, and/or because they sell the meager inventory of titles they do have available at rates appreciably higher than Amazon, which for a long time had a self-imposed limit of no more than $9.99 per title (even if it meant selling a title at a loss to itself – something it was prepared to do as part of its investment in creating the acceptance of the new format).

But in the three years since Amazon's Kindle launch, there have been major changes in both eBooks themselves and the readers that can display them, and Amazon is shifting from being the market leader to now being a market follower, while its Kindle product is looking decidedly out of date and no longer as 'sexy' and appealing as it was a year ago.

Of equal significance, Amazon is now not only no longer the market leader, but it also is no longer the market controller.  Amazon can no longer dominate and determine the format of eBooks and their readers, with competing technologies and competing vendors now having increasing importance, with two new competitors threatening to eclipse Amazon's role.

Apple's iPad provides a massive threat to the Kindle hardware, and Barnes & Noble, after a lackluster launch of their Nook reader a year back have now come from behind with a greatly improved new Nook color reader and a growing inventory of book titles increasingly comparable to Amazon.

Amazon has also seen their eBook pricing advantage erode away due to publishers using brute force (as well as a generous measure of ignorance) to force Amazon to sell newly published eBooks for higher than $10 prices.  This has repeatedly seen the nonsense situation where the price of a book can be cheaper in traditional print form than in new electronic form, a pricing distinction that has no relationship to the underlying costs of production and distribution, and which further fails to recognize the limits imposed on people who buy an eBook version – they can not conveniently share or resell their eBook, whereas they can do both of these things free of any restriction if they buy a regular print book.

Perhaps more seriously is the evolution of eBooks – and competing eBook readers, to increasingly support/include color and even video.  Even Amazon itself now sells eBooks that come complete with color imagery and video clips in them, but is in the ridiculous situation of not being able to support the video on their own Kindle readers, and having to show the color images in simple disappointing low resolution black and white, on their Kindle readers.

The most notable recent example of this comes from an unexpected source – George Bush' autobiography released last week, 'Decision Points'.  It is available in two Kindle formats, both at the same $9.99 price point – a standard version which simply mimics the print edition, and an enhanced version which includes many more pictures, additional text materials, and even video clips too (some of which run for over 20 minutes).  Try and play this on a regular Kindle reader and you get a rather sad message informing you there is content that can't be played on a Kindle.

In its full glory, Decision Points is an almost 500MB eBook (most of this is the video content).  In its watered down version for Kindle readers, it still consumes 70MB of space – in comparison, a regular eBook with no pictures is typically less than 0.5MB in size.

The growing size of eBooks poses a problem for current Kindles.  The original Kindle supplemented its built-in memory with the ability to accept SD cards giving it unlimited off-line storage.  The newer Kindles strangely eliminated the SD card feature (and also changed from a removable/replaceable battery to a built in battery that can not be replaced by the user).  The Kindle 2 and 3 models are claimed to have capacity for either 1750 (Kindle 2) or 3500 (Kindle 3) books in their built-in memory (2GB and 4GB respectively).

But if new multi-media titles are to increasingly become the norm (as they surely will) the capacity of the Kindles dwindles to something like a mere 50 or 100 books.  If the full 500MB sized title could be played, you're looking at little more than 4 or 8 books able to be stored on a Kindle simultaneously, something which massively reduces the appeal of eBooks, particularly for people when they travel with their Kindle.

However, as big a weakness as this is becoming, it is not the biggest problem facing Amazon and its Kindle product line.  The biggest problem is that Amazon is selling eBooks which can't be played on its own Kindle reader – this is a crazy situation which demands an urgent solution.

Indeed, there is already a solution.  Read the book on an iPad or computer instead.  Or buy Barnes & Noble's new Nook Color eBook reader (pictured at the top of this article) – a game changing competitor to the Kindle which overtakes the Kindle's earlier superiority.  Not only does the Nook color eReader have a higher resolution, color display and the ability to display video, but it also has much more capacity for eBooks and can accept microSD cards, giving it unlimited additional offline storage.

The Nook Color also has a touch screen, something that is much more in-line with today's interface expectations, compared to the Kindle's increasingly obsolete feeling non-touch screen interface.

The Nook Color eBook reader sells for $249 – $110 more than the cheapest Kindle.  An appreciable pricing differential (although $249 is still much less than Kindles used to cost until earlier this year with the introduction of the Kindle 3), but buying a Nook today opens you to the future of eBooks and eBook reading.

Buying a Kindle locks you into the past.