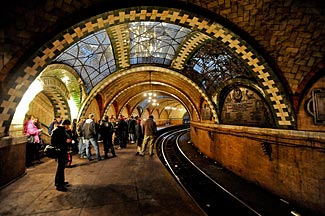 There's something mysteriously appealing about subways, and in particular, about abandoned subway routes and disused stations.  Legends abound about hidden/secret subway lines (for example Moscow's alleged 'Metro 2' subway system, which, if it exists, may be even more extensive than Moscow's massive public system), and then there are the forgotten subway lines too.

How could one forget about a subway line, you might wonder?  Here's an interesting story about one such forgotten subway line, built in New York in the 1860s by the editor of Scientific American, Alfred Beach (and here's some more interesting material on this project).  Here's another article about this and three other little known US subway lines.

Semi-forgotten are the many abandoned stations that litter the world's subway systems.  As systems evolved with new lines and changed lines, plus with above ground changes too, some stations were no longer needed and simply closed, while their below ground structures were left abandoned but largely intact.  The older and larger the subway system, the more likely and more numerous the abandoned stations.

Over time, the concept of 'largely intact' deteriorates of course, with natural decay aided by vandals and thieves, and most former subway stations are now decrepit, dirty, dark, dank and disappointing.  But there are a very few exceptions, and perhaps the most notable of these is New York's City Hall subway station.

This was originally opened in 1904, and was designed to be a showpiece of subway architecture and both was and still is unique among New York's subway stations in terms of its stunning design.

Unfortunately, it was not a very popular/convenient stop, and during the Interborough Rapid Transit (IRT) Company's program of expansion in the 1940s, it was decided due to low ridership (at its peak the station was only used by 600 people/day) and the difficulty of expanding the platform to instead close the station down, with the nearby Brooklyn Bridge station being intended to provide an alternate stop.

The station closed in 1945.  But it has been more or less maintained over the years, and #6 trains still pass through the station, albeit without stopping.  On occasion it has been opened for special occasions, either unofficially or officially, most recently in 2004 to celebrate the centennial of the IRT.

Here's what seems to be the definitive article on this station, complete with some stunning photography showing the splendor of the station.  And here's a listing of abandoned NY subway stations in general.