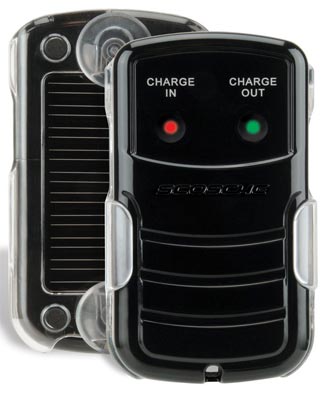 Power everywhere, and free.  A dream that many of us sometimes wish for (especially when staring at a cell phone while its battery quietly expires), but one which is of course close to impossible to achieve in real life.

But read on, because perhaps this device is as close to universal free power as we are likely to ever get.

An Introduction to Solar Chargers

Probably the closest to the ideal of universal free power is a solar powered charger, but this is not as practical a solution as it may seem, for two reasons.  Firstly, and obviously, a solar powered charger needs to be in reasonably direct sunlight in order for any charge to flow from the solar cell to the device being charged.  If it is night-time, or even if you're in the shade or indoors, you'll get somewhere between zero and very little current from the solar cell.

Secondly, solar chargers typically generate only a very low amount of charging current.  A regular power charger will charge at a rate of about 500 milliamps.  A fast charger, or one for a high power device such as an iPad, will charge anywhere from 1000 – 2000+ mA.  But a typical solar charger with perhaps 4-6 sq inches of solar cell will give you maybe 50 mA of charging current.  In other words, a device that would take a couple of hours to charge on a standard charger would take 20 hours to charge with a solar charger.

But that is not all.  In some cases, the solar charger will be feeding power into a device more slowly than the rate at which the device is consuming power.  That is an unwinnable equation that might extend the life of the device, but won't ever recharge it.

In order for a solar powered charger to generate more power, you need to increase the size of the solar cells, something which is practical for a fixed installation on the roof of a house perhaps, but something which is not so practical if you are wishing to create a portable charger.  It also goes without saying that the larger the solar cell array, the greater the cost of the unit.

Fortunately, someone came up with a great idea that addresses a lot of these problems.  A solar powered 'back up' battery.  This gives you a reservoir of reserve power in the form of (typically) a lithium ion rechargeable battery, and so when you connect a device needing to be recharged, it quickly draws its necessary power from the lithium ion battery and the unit, at much the same speed as it would if connected to a regular mains charger.

This type of hybrid technology really is the best of both worlds.  With a lithium ion battery of sufficient capacity, you have at least one full charge of standby power for most devices, and by the time both your device and your backup battery are both depleted, there is every good chance that you may have made it to a normal wall plug to recharge both devices.  If not, then the battery can be slowly recharging itself from the solar cell, for when your device needs to be recharged again.  The next time your device needs a top up, it can take whatever power from the lithium ion battery that the solar cell has transferred into it since the last time it was drained and recharged.

This is not a perfect solution, but it gives us considerable extra freedom in terms of how long we can survive away from mains power.  The effectiveness of it of course varies depending on how much power you need and how much sunlight you receive.

And so, with the preceding as introduction, enter the Scosche sunVOLT Solar Charger/Backup Battery.  This unit combines a 1500 mAhr lithium ion battery with a small solar cell.  It can also accept charging current from any type of USB charger, and it will output its stored power through a USB output to any type of device that accepts USB charging.

As explained above, the combination of a 'reservoir' battery and the solar cell recharging gives this the best of all worlds, being able to quickly recharge a device, while at the same time enjoying some freedom from mains power to recharge itself, without needing to be unduly big or bulky in the process.

It comes with a clear plastic mounting shell and suction cups to enable it to be mounted to the inside of a window or car windshield or any other clear surface (for the purpose of getting sunlight onto its solar cells).  As a second mounting option, it also has a small carabiner clip, so if you were perhaps going out backpacking in the countryside, you could clip this to the back of your pack and it would be slowly charging when the sun was shining on it as you walked.

A generous one-year warranty is offered with the unit.

The sunVolt device is nice and light to carry, and simple and easy to use.  There are two sockets on the bottom of the unit; a micro USB socket to accept charging power into the unit, and the standard USB socket to pass power on to devices that want to be charged.  On one of the units sides is a small solar cell array, measuring about 1.5" x 2.5".  On the other side are two LEDs and a battery charge indicator.  The battery charge indicator shows between one and four lights depending on its charge state.  One of the two LEDs is labeled 'In', and it glows red when the battery is being charged.  The other LED is labeled 'Out', and it glows green when current is flowing out of the battery to charge some other device.

It is possible to have both lights on at the same time, if for example you are receiving current into the battery from the solar cell and also charging out to an external device simultaneously.

The red light glows more or less brightly depending on the rate at which the unit is being charged.  This is interesting, and helps you understand whether the unit is getting enough sunlight to generate a charge or not.

The internal 1500 mAhr battery has a good capacity.  This amount of capacity is about the same as a full charge on an iPhone, and is much more than the capacity in most standard phone or MP3 player batteries.  So you can expect the internal battery to more or less double the life of most small portable electronics.

Charging via the Solar Cells

When the unit is directly facing the unobscured sun, it will be charging at maximum efficiency.  When the sun starts to reach the unit on an oblique angle, or when the unit is in the shade, the red charging lights will dim and/or extinguish.

The unit may also generate some charge if under bright lights indoors.  Incandescent lights work best; the increasingly common high-efficiency fluorescent lights do not work nearly as well for this purpose.

It probably takes about 40 hours of sunlight to charge the internal battery.

The solar cells provide another useful function as well as recharging the built-in battery.  They can also keep the built-in battery topped up with charge.  So maybe you don't use the battery for several months, but if you have been storing it somewhere where the solar cells get occasional sunlight, the small amount of trickle charge from the solar cells will be sufficient to keep the lithium ion battery at full charge.  Normally, lithium ion batteries slowly lose their charge over a month or two.

This device provides a useful amount of backup battery power sufficient to double the life of most small portable electronic devices.  It is small sized, light weight, and easy to use.

The solar cells on one side of the unit provide a way to either very slowly recharge the internal battery, or to keep the internal battery fully charged while in standby mode.  The solar cells do not charge the battery fast enough to give you a charger that is truly independent and powered exclusively by the sun; but as a supplement to mains charging, they might one day make all the difference between keeping your phone or MP3 player or GPS unit alive, or suffering the consequences of your device going dead on you at some critical moment when it is most needed.  The unit works with almost all modern small electronic devices that can be charged from a standard USB port.

Scosche is a reputable supplier of various power charging and other accessory products.  The sunVolt unit lists for $30 on their website, and can be purchased from Amazon

for about $20.  As such, it is very reasonably priced, and makes a great stocking stuffer type gift to give to the person 'who already has everything', or to someone who likes to go off camping in the bush for several days where mains power is not a possibility.