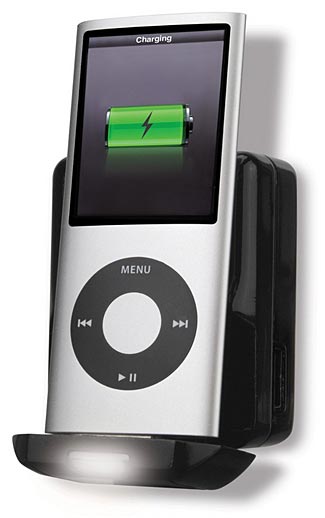 Does the world really need another charger accessory for iPhones and iPods?  Many accessory makers optimistically hope the answer to this question is yes, at least when it is their product they are offering.

One of the better accessory makers is Scosche.  They make a broad range of products for Apple's various iOS products (iPod, iPhone and iPad), ranging from chargers to protective cases, from wireless remotes to external speakers and clock/radios.

I tested one of their chargers, and liked it due to several clever features.  This is their low priced (list $25, $18 at Amazon

The device is a small black wall 'brick' charger, with folding in prongs to make it more compact for packing.  It measures about 2.5" x 1.9" x 1.1" and weighs 2.4 ounces, making it easy to include in your travel bag.  The unit is multi-voltage so would work anywhere in the world with the necessary adapter plug; alternatively, Scosche also sell a related product which comes complete with four exchangeable plugs allowing it to work just about anywhere in the world.  This is their UIPHC2 reviveLITE int, and lists for $35 instead of $25.

There are two charging outputs – one is a regular Apple style connector on a fold out flap in the front of the device.  As pictured here, you can sit/stand an iPod or iPhone so that it plugs in to the connector and rests against the front of the unit while charging.

Note this unit will not support the greater weight of an iPad.  I tried – it bent the fold out flap too far and rather than having the iPad rest leaning back safely against the unit, instead the iPad leaned forward and wanted to fall out of the charger.

The second charging output is a regular USB outlet on the side, into which you can plug any type of USB charging cable to any type of device that can be charged from a USB outlet.

The Apple port will charge at 1A, and the regular USB port will charge at 0.5A.  Both ports can charge simultaneously, at up to 1.5A.  The 1A charging rate from the Apple connector is good, and allows for reasonably fast charging times.  The 0.5A rate out of the USB port is not quite so brilliant and would make for slower charging, and is close to being too low to charge an iPad (other than over a very long time).

It is good to have an Apple port directly on the device – it saves you having to also keep (find) an Apple connector cable.

There is one other nice feature.  There is a tiny LED night light on the front of the unit which you can switch on or off.  This might be useful if you are in a strange hotel room so if you wake up in the middle of the night, you can at least dimly see where you are (and where the bathroom is).  The night light draws an immeasurable amount of power (less than 1 W) so you can leave it on all day and all night, always, if you wish.  (If we guess the unit draws 0.5 watts, and if we say electricity costs you 10c/kWhr, then the cost of leaving this plugged in with night light on is about $1 for every two and a quarter years – or, to put it another way, about 4c a month.

Apple charge $25 for a basic iPod charger with one USB output and nothing else, and $30 for a basic iPhone charger, also with only one USB output and nothing else, and you'll not see them discounted.  So to get a dual output device complete with night light for the same list price and a street price just below $18 (see link to Amazon above) has to be considered a good value and better deal.

Great for a stocking stuffer gift – and perhaps good for you too.