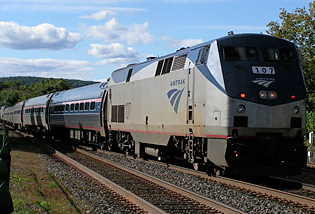 Two more items of rail news.  First, some good news from Amtrak, reporting a record number of passengers for their fiscal year which ends on 30 September.  Ridership was up almost 6% on the previous year, with 28.7 million passengers for the year in total.  Income was up even more, to $1.74 billion, an increase of 9%.

Amtrak says it now has a 65% share of the air/rail market between Washington and New York, and a 52% share of the Boston/New York market.

So why doesn't it add more trains?  If Amtrak has proven it has a viable product, surely the next step is to add better frequency.  I went and had a look at its current schedule.

In contrast, there are 250 flights from Washington area airports up to New York city area airports.  Sure, you could do the same winnowing process that I did with Amtrak, but you'll end up with departures probably more frequently than every half hour.

Maybe instead of making empty boasts (and then doing nothing) about high speed rail, we should simply give Amtrak a couple of billion dollars more to allow it to invest further in the proven successful routes it already operates.

Some true high speed rail, this time in Italy, where the Italian railway company Trenitalia has ordered 50 new high speed trains from Canadian manufacturer, Bombardier.  This is a $2.1 billion order, with each new trains carrying up to 600 passengers at speeds of up to 225 mph.

While it isn't necessarily meaningful to compare the capital costs of trains and planes, it is interesting to see that each of these trains is costing about $42 million.  In comparison, a new A380, also capable of carrying about 600 passengers, costs probably $250 – $300 million.  Or, to put it another way, $42 million would buy a single heavily discounted 737, capable of carrying about 175 passengers, or a 600 passenger train.

Trains are good value in capital cost terms.  Although there is more to the cost of operating a railroad than just the train set – you also need the right of way and the track, and that is an area where costs are massively higher than for air routes – but that's another reason for Amtrak to 'double down' on its service between Washington and New York.  Many of its track costs are fixed, and so if Amtrak can operate twice as many trains a day, and carry two (or three) times as many passengers, it is spreading its fixed costs more broadly, allowing for more profit and/or lower fares.

This Week's Security Horror Story :  I'm starting to hear several reports of 'US security officials' – and, alas, our Commander in Chief as well – claiming that the US could 'absorb a terror attack and bounce back'.  Here's one such example.

Why are we being told this?  I can't think of any good reason for this concept being floated; and I wonder if our leaders are relaxing their standard from not letting any terrorist attacks succeed again on US soil to accepting a certain level of successful terrorist attack as being okay.

While I've always agreed that the likelihood of us being 100% successful, 100% of the time, and preventing 100% of all possible terrorist attacks is, well, a less than 100% certainty, and while I've delighted in making fun of some of the more ridiculous and paranoid (or just plain dumb and ineffective) so called 'security' measures being foisted on us, I've certainly respected and appreciated the honest ardent desire of our anti-terror forces to do the best they can to protect us.

It is undoubtedly true that the US could survive another terrorist attack of the type that we suffered on 9/11 (or of the type experienced by other countries subsequently).  But let's not make it any easier or any worse than it must be, and let's still keep trying our hardest to keep the bad guys on the other side of our border – unless, of course, we're talking about our southern border, because as we all know, there are no bad guys on the other side of that porous line in the desert so there's no need to bother about protecting it.

If your blood pressure and positive mental attitude can stand it, here's the latest example of our government resisting and preventing the securing of our southern border.

There are a lot of brave – or possibly foolhardy – people in Manchester.  According to the airport authorities there, 95% of passengers would rather risk a potentially deadly dose of radiation through a whole body scanner than be subjected to regular security screening.

Apparently, for passengers as well as for security officers, convenience trumps safety.

It is a while since I've come across anything worthy of comment to do with global warming, or as it is now officially known, climate change – and the renaming of this really says it all and shows that while its proponents now concede that global warming may well be a non-event, they're not changing their clamor for 'carbon credits' and all manner of other wealth-transferring schemes.

But here's an extraordinary letter from the Emeritus Professor of Physics, at the University of California, Santa Barbara, written in resignation to the American Physical Society.  It is worth reading, and while some commentators have glommed on to his delightful phrase 'Global warming is the greatest and most successful pseudoscientific fraud I have seen in my long life' I find his explanation of why it is such a successful fraud to be of equal importance – 'the global warming scam, with the (literally) trillions of dollars driving it, that has corrupted so many scientists, and has carried APS before it like a rogue wave.'

You can see the full text of his letter here.

Talking about trillions of dollars, may I remind you of our current fundraising appeal.  :)  Please do visit our contribution page and choose to help support this worthy endeavour :  http://www.thetravelinsider.info/2010/2010fundraising.htm