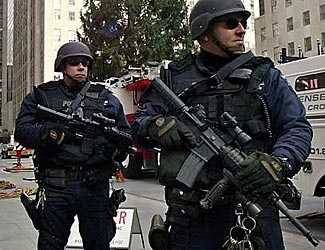 Operation RailSafe will see a 'law enforcement surge' on Amtrak routes on Friday this week.  Uniformed police will be 'a visible presence on national transit routes', and the exercise is said to involve all the local police agencies along the Amtrak routes in the exercise.  Details here.

Is this a hurried response to the currently heightened fears of terrorist attacks in Britain and Europe, and an urgent attempt to protect against a specific threat against Amtrak?  Uh – no.  A senior DHS official said it is a long-planned exercise which is not connected in any way to the terror threat in Europe.

So what is the point of this exercise?  It certainly won't catch any terrorists, because it is being publicized in advance.  It comes from nowhere, involves a lot of hassle for travelers and overtime costs for law enforcement agencies, then disappears again the next day with nothing to show for it.

Any terrorists planning to do nefarious deeds on an Amtrak train would simply have to wait 24 hours, and do whatever they were planning on Saturday.  The worst case would be the train they wanted to attack doesn't run every day and they might have to wait two or three days.

Of course, any terrorist who wanted to attack Amtrak in this country would need his head examined, anyway.  Amtrak is not a close part of the social or services infrastructure of the country, and sadly for most of us is an irrelevancy – unlike air travel, unlike sports stadiums, unlike shopping malls, unlike theaters, schools, hospitals, amusement parks and all manner of other vulnerable places where lots of people are crowded into small places.

Four thoughts and one conclusion :

1.  Is this the most vulnerable part of our nation, most likely to suffer a disruptive terrorist attack at present?

And, if it is indeed the most vulnerable, in what way will this one day exercise make Amtrak less vulnerable to attack the next day, and into the future?

2. Is this the best use of our police?  Are there no actual real crimes that need to be detected or prevented anywhere along the Amtrak routes?

Why not spend the tens (possibly even hundreds) of thousands of man hours going into this exercise on real policing?  How about 'the war on drugs' (whatever happened to that, anyway – did we win or lose)?  How about catching some burglars or prowlers?  How about doing something about the gang problems in our inner cities?  Or if that is too hard, why not go arrest some drunk drivers (or simpler still, ticket motorists for exceeding the speed limit by a trivial amount)?  Or go around city streets fining people jaywalking and parking on expired parking meters?

3.   Is this the best use of our taxpayer dollars?

For sure there'll be overtime, shift allowances, meals, transportation costs, and who knows what else associated with this exercise.  If the claim that every police agency along Amtrak routes will be involved is true (and that's a huge number of city, county, specialized, state and federal agencies), this will be an enormous exercise; best case scenario merely taking away tens/hundreds of thousands of hours from 'real policing' work and more likely scenario adding up to millions of dollars in above the line costs as well.

Why not spend the millions of dollars this exercise will cost on repairing some of the Amtrak carriages that are currently inoperable – that would have a greater net benefit to Amtrak riders than a day of security theater.

Or why not pay down the deficit a bit?  Or allocate the money to other more pressing issues with more direct outcomes?

4.  What about the cost and inconvenience to law abiding American citizens simply wishing to peacefully travel on Amtrak.

Conclusion :  There is no sense in this regrettable waste of manpower and money.  There will be no positive outcome and no benefit.