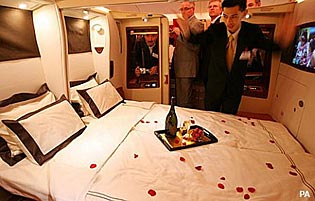 Two naughty airlines get delicate slaps on the wrist from DoT.  Sun Country has been fined $40,000 for violating the DoT's advertising rules, but only half of it is payable now, and the balance will be forgiven if the airline doesn't get caught doesn't reoffend again in the next year.

Sun Country had an ad offering fares from $89 with an asterisk but no footnote.  Three destinations were mentioned, but the fare only applied to one destination, and there was no disclosure about taxes and fees on the same page.

The DoT also delicately slapped El Al on the wrist.  El Al refused to accept liability for any loss, damage or delay in the delivery of certain items in checked baggage.

The DOT said airlines are not allowed to apply blanket liability exclusions to any class or category of baggage under international agreements and US policy. The airline has agreed to pay a civil penalty of $30,000, on a similar basis of half now and the rest will be waived if there are no similar violations for one year.

Enough of the tough love.  The DoT is also playing its more customary role as Mr Nice Guy to the airlines.  It has decided to grant anti-trust immunity to American Airlines and Japan Airlines for flights across the Pacific, and also to Continental, United and All Nippon Airways.

Wow.  We've gone from five airlines to two (plus a remaining dwindling bunch of others, of course) on flights to/from Japan.  But I'm sure the DoT will confidently reassure us that these anti-trust exemptions will increase competition and benefit the consumers.

Next up – a 'partnership' between Air Canada and United/Continental.

Air Canada's chief commercial officer, in an unguarded candid moment, referred to it as 'as close to a merger as the two companies can come'.  Here's some propaganda if you wish to read it on why this will be such a great thing for the airlines their passengers.

Some airline good news.  For those of us stuck on long trans-Pacific flights with nothing to do, Singapore Airlines has announced plans to add in-flight Wi-Fi and regular (GSM) phone service – definitely for texting and possibly for voice calls too -  onto their planes, starting from early in 2011.  Details (but not of the likely pricing) here.

Oh – the picture at the top.  That is of a Singapore Airlines double bed in one of their lovely A380 first class suites.  While Sir Richard Branson makes empty promises about adding double beds to the A380s he delays taking delivery of, SQ has been offering them since 2007.

There's been a series of unquestioning articles (for example here) reporting a survey that shows airline passengers want to be able to do more and more things via self-service kiosks.  The official interpretation is that passengers are increasingly comfortable using these (and other types of) devices to make travel arrangements and related matters themselves.

I disagree.  But when you're confronted with a half hour or longer wait to speak to a rude incompetent airline employee, of course we would rather have access to a mindless computer.  This survey doesn't show that the public are becoming delighted with computer systems, it shows they are becoming increasingly desperate and searching for any way at all to communicate simple issues/needs/problems with the airline.

There's been a bit of a surge of news about the a nasty new airline seat that would enable airlines to squash even more passengers into a plane.  I wrote about it back in July, but the mainstream media only discovered it a couple of weeks ago.

However, this futuristic semi-sitting/semi-standing seat is nothing compared to what happened on a recent flight from Antalya to Ekaterinburg.  The five hour 142 seat flight was overbooked, and so six passengers who would have otherwise been denied boarding chose instead to fly, standing up in the aisle.

This article gets a bit over-wrought about the event, talking about the lack of seat belts and oxygen masks.  In actual fact, about every other row normally has an extra oxygen mask – necessary if, for example, a passenger is traveling with an infant, so the oxygen issue would have been okay.

In one of the Air NZ flight safety and promotional videos in this series (you only see one in the preceding link) one of the actors was none other than the airline's CEO.