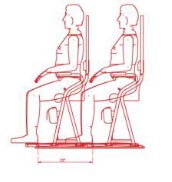 An Italian airplane interior design company is proposing a new style of coach seating that would squash in 50% more passengers than the current already cramped airplane seating, what they call their SkyRider seat.

Generally most coach class seats on most planes have a seat pitch of about 30″ – 32″.  Pitch means that the ‘repeat length’ – the distance between one seat starts and the next seat in the row ahead starts.

Over the years this pitch has reduced, although it has been partially offset by making seat backs thinner.  If you can take 1″ out of the seat back padding, then you can move the rows of seats 1″ closer together without reducing the leg room for the seated passengers.

Until now the basic limiting factor has been upper leg length, because one’s knees typically end up close to the back of the seat in front.

Now an Italian design company is proposing a ‘stepped’ type of design that has your legs sloping down and therefore able to partially fit underneath the seat in front.  This would allow for much closer spacing, or so they say.  They are suggesting a 23″ seat pitch.  In other words, what was formerly two rows of seats at 34.5″ could now become three rows of seats at 23″.

But, think about the following issues :

1.  There’s no way you could squeeze out of a row if you’re in an inner seat.  All the other people in the row would have to get out first before you get out.  This is not only a problem if you want to get up in-flight, but will make the boarding process much more complex.

6.  Talking about boarding, with that many more people, it will take much longer to board – and exit – the plane.

2.  The seat back in front of you will now be 7″ – 10″ closer to you.  Feeling claustrophobic yet?  Wait until the person in front reclines their seat!

3.  Talking about claustrophobia, there’s a greater chance now that your row won’t have a window alongside it, further increasing your sense of ‘the walls crushing in on you’.

4.  If you formerly managed to use a computer on a flight, the reduction in space between you and the seat in front will make that surely impossible.

5.  There’ll be the same amount of overhead space, now to be shared among many more passengers.

7.  Lines for the toilets will be much longer.

As for the overall comfort of sitting in what they describe as ‘similar to a touring motorcycle rider’ (whatever that means), I’ve no idea, but have my doubts.

More details here.  I attempted to open the design company’s website, but it isn’t responding.  Hopefully that might mean they’ve gone out of business and this terrible idea will quietly disappear.

8 thoughts on “Cramped airplane seating? You ain’t seen nothing yet!”