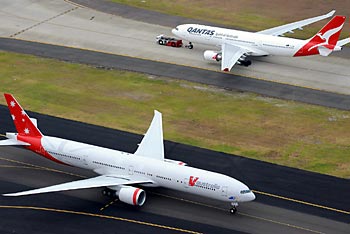 Amazingly, the Department of Transportation has discovered the word 'No' and used it in response to a request by two airlines to form an alliance.  But – wouldn't you know it (at least in my opinion) they are using it at the wrong time, and refusing an alliance that actually would benefit us as passengers.

Australian airline V Australia and Delta had asked for permission to form an alliance to offer service between Australia and the US.  Both airlines had started flying the route a couple of years ago, and then decided to join forces.

As you probably know, I'm usually very opposed to airline alliances, because they reduce competition.  Two airlines become one (sometimes three or four airlines become one) and the number of airlines on a route reduces.  But this situation was/is an exception.

The route to Australia has suffered from fares ridiculously higher per mile than most other routes in and out of the US, in large part due to the lack of competition.  Qantas massively dominates the route, with Air New Zealand and United jointly mounting a weak riposte, but by and in large, the market belongs to Qantas.

Other airlines occasionally have tried to fly the route as well, including Continental and Northwest.  Of course, Continental is in the process of becoming United, and Northwest is now Delta.

I didn't give much for the odds of Delta succeeding in becoming a viable third player on the route, and then V Australia appeared as a fourth player, with shallower pockets and less resource than any of the other three players.  Qantas and UA/NZ reacted traditionally by dropping fares down to levels half what they used to be – sometimes even less – and the opportunity for either V Australia or Delta to skim off some 'easy pickings' at profitable fare levels disappeared in a flash.

My projection was that V Australia and Delta would weaken each other and kill each other off.  Neither Air NZ nor Qantas can afford to lose, and so they and their alliance partners are in this battle all the way to the finish, but I was expecting both V Australia and Delta to decide it was too hard and to go expand elsewhere instead (it is a big world with plenty of opportunities elsewhere).

And then, the two new entrants had a brilliant idea.  Why not join forces, and instead of having two small bit players doomed to certain death, they could between themselves create a viable third carrier.  V Australia could bring its routes in Australia to the party, and Delta could bring its routes in the US and elsewhere to the party, and instead of two carriers, both too small to survive, we had the potential for a third carrier, with good feeder/distributor services on both sides of the Pacific,  and substantial enough to survive the onslaught from QF and NZ/UA.

So, in this case, two airlines forming an alliance doesn't reduce the competition on the route.  Historically, the route has been owned by only two airlines – Qantas and NZ/UA.  Allowing Delta and V Australia to join forces means that a sufficiently viable third airline would be created – competition would increase.  This alliance did not represent a reduction from four to three carriers.  Rather it meant that the former two airline lock on the market was now being punctured by a viable sufficiently strong third carrier.

Instead, the Department of Transportation has bizarrely refused the alliance.

What will happen next?  My guess – look for V Australia to disappear once it seems plain there are no remaining ways to forge an alliance with Delta, and as for Delta, I'm far from sanguine about its future on the route either (although the way the world has coalesced into just three airline alliances means that the NZ/OZ – US route is a gaping hole in Skyteam's route system that Delta might be motivated to persevere at for a while long.  Let's hope so.

The DoT's refusal to allow a strong third carrier means we're risking a return back to two carriers, and for sure, there's no way that the route will support four airlines, particularly with one having no feed in the US and the other having no feed in Australia.

And so, I find myself in the uncomfortable position of advocating an alliance, and even more puzzled than normal at the flip in the DoT's position to refusing an alliance request.

1 thought on “The US DoT Discovers the Word No, then Uses it for the Wrong Alliance Request”