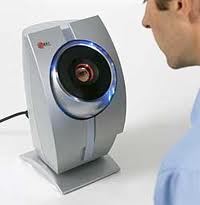 In theory, using eye/iris scanners as a way of establishing the identity of visitors to the US seems like sort of a good idea, although you have to wonder why the US uniquely has this need, particularly when people are traveling with a passport that – ummm, establishes their identity to start with, and further when our government chooses to look the other way and continue to welcome anyone and everyone who enters via our insecure southern border.  Why are we spending so much money on increasingly sophisticated technology to police lawful visitors to the country when we leave our 'back door' wide open and with a welcome mat spread out?

However, and putting that issue to one side, there's an interesting and scary downside to iris scanning.  If you even think about what an iris scanner is, you probably have a mental image of someone sticking their head up against some sort of scanner and keeping very still for some period of time while the scanner builds up an image of their eye and iris patterns.

But did you know that these days there are scanners that can capture images from as much as six feet away, and which can capture images of people as they walk past?  Give us another generation of technological improvement, and before you know it, hand sized units will be able to randomly scan a crowd of people at a distance and identify everyone present.

Is this a capability we really want to give to the state?

Let's think about a couple of other developments recently that also point to a growing intrusiveness into our private lives and ordinary day to day activities.

Riders on PATCO trains between Philadelphia and southern New Jersey are finding themselves occasionally being randomly searched by TSA screeners when they board their trains.  What's this – some special security alert?  No, not at all.   It was just a random exercise, and justified by Delaware River Port Authority Police Chief McClintock who is quoted as saying 'We can conduct any kind of search we want'.

Wow.  I guess the Fourth Amendment to the Constitution no longer applies on PATCO trains.

Now you might think 'Big deal, I have nothing to hide and I never ride PATCO trains anyway', but please stop and consider the abrogration of the Fourth Amendment to our Constitution.  And it wasn't as though there was any special alert or threat or security emergency driving this event, it was a random show of power and one which it is planned will be regularly repeated in the future.

Oh – number of terrorists caught?  None.  Number of illegal immigrants ignored?  Your guess is as good as mine.

In North Carolina, the state sheriff's association is pushing to be able to access everyone's medical records to see who is being prescribed 'powerful painkillers and other controlled substances'.  More people die in NC from accidental overdoses than from homicides.

Excuse me, but shouldn't the control point here be at the medical practitioner and pharmacist?  Do we really want deputies monitoring our medical health and the medication we take?  Details here.

One more thing – something we've often feared and wondered and worried about – here's an example of how people who were known to be lawfully protesting against an issue ended up on a terrorist list.  We are told it was a mistake.

Now for the terrible tragic story I mentioned at the start of my weekly roundups.

To introduce it, have you heard the adage 'When seconds count, the police are only minutes away'.  I say this not to criticize the police at all, but rather to state the obvious.  It is not possible for a policeman (or a team of policemen) to be closely at hand to everyone of us, 24/7.

Another similar adage states 'There's never a policeman around when you need one'.

These are just unavoidable and universally acknowledged truths, and indeed as an extension of this, the police have no duty to protect us, in the sense that if something bad happens to us, we have no recourse against the police for having failed to prevent it.

This is part of the background to why some people realize that, when the chips are down, they may need to be self-reliant.  Until it becomes a perfect world, and all of us become perfect people, a prudent person plans for worst case scenarios and how to minimize them – how to avoid them to start with, and how to resolve them if they become unavoidable.

Now, please consider this tragic story of the police leisurely bungling a home invasion/hostage/kidnap, with the result being a mother and her 17 and 11 year old daughters were all brutally raped then killed.  The police were called at 9.21am and told of the situation, they commendably had vehicles almost on the scene within six minutes, but then did nothing more for 27 agonizing minutes.  They didn't approach the house, they didn't call for fire or ambulance services, they didn't notify state police, and at 9.54am, the woman and her two daughters were killed.

Here is further background on this appalling home invasion (and there are links to other articles and even a recording of the 911 call on these pages too).

Now I'm not saying that a firearm would have saved this family, but – and here's my point – they not only faced certain death but duly suffered that death after unspeakable horrors prior to then.  Would an aware family able to mount an armed defense have saved this tragedy?  We don't know, but for sure, I bet the grieving husband wishes with every fiber in his body that he'd had a chance to find out.  Instead, he is pursuing a 'locking the stable door after the horse has bolted' policy of advocating capital punishment.

As parents and partners/spouses, we have an overriding obligation to protect our loved ones, and to protect ourselves so we can continue to care for our loved ones.  Until such time as our safety is unconditionally guaranteed against bad people and bad situations, we can't afford the luxury of burying our head in the sand and hoping that the horrors of our society will pass us by.

That's why I've taken it upon myself to get the very best possible personal defense training at Front Sight, and that is why I am urging you to consider doing the same.

If you absolutely can't bring yourself to consider owning a firearm, take an edged weapons course (but then you risk 'bringing a knife to a gunfight') or an unarmed combat course, or in some other way changing yourself from 'potential victim in waiting' to survivor and victor.

As one of my Front Sight instructors told me, based on his 30 or so years of experience dealing with convicted very bad guys, the evil people in this world aren't stupid.  Bad guys seek out the easy prey, and can sense from body language and actions who the best victims are, and who to leave well alone.  One suggestion from this person – look people hard in the eye if you are uncomfortable passing them in the street.  A bad guy doesn't want to be identified in a line up subsequently, so he will always choose a victim who avoids looking at him, while leaving alone someone who looks carefully at him.

Alas, it seems the police don't much like being stared at, being identified, and being filmed either.  Here's an interesting article about how the police aggressively attempt to avoid public accountability for whatever it is they prefer to do in private.

Anyway, that's all from me for this week.  But may I close with a question.  Do you use Facebook?  Oh – are you narcissistic, insecure, and suffering from low self esteem?  Or am I repeating myself?  :)