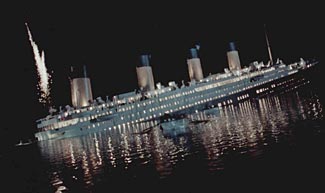 Something about the sinking of the Titanic has captured the hearts and imaginations of people for 98 years now, and there has been an enormous amount written about the disaster, with plenty of analysis about how it was that this 'unsinkable ship' actually sunk and why rescuers were slow to to reach the scene, resulting in an appalling loss of life.

You would think there is little or nothing remaining to uncover about the events on and immediately prior to 14 April, 1912.  But now the grand-daughter of the Titanic's Second Officer, Charles Lightoller, has come forward with what she says are two family secrets, handed down from her grandfather to her, and which she now wishes to make public.

The first secret has been hinted at before – the helmsman turned the wheel the wrong way, contrary to the steering order, causing the ship to collide with the iceberg that it still could have missed if it had turned the correct way to avoid it.

The second secret is not one I've seen mentioned before – the ship could have remained afloat for an extended time if it had not been ordered to continue sailing at a slow speed, with the water pressure thereby created exacerbating the rush of water into the ship and overwhelming the insufficiently high water-tight doors.

Here's a fascinating article, explaining both issues in more detail.