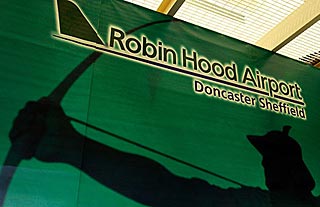 A man – Paul Chambers – makes a joke on Twitter, venting his frustration about a UK airport being closed due to bad weather, in a context where he was very keen to fly over to Ireland to be with his girlfriend.

The airport's director of security stumbled across the tweet, presumably by searching for all mentions of Robin Hood Airport on Twitter.  He deemed it a 'non-credible threat', but due to the mandates of procedures, passed the information on to the South Yorkshire police.

But they too subsequently decided it was not a terrorist crime at all.  And so released the man.  But the mandates of procedures required them to pass the information on to the Crown Prosecution Service (CPS).

Unfortunately, Paul lost his job as a result of his arrest, after nine years of good work performance.

The CPS decided that the offence doesn't fall under the bomb-hoax crimes.  But instead of dropping the case, they search into Britain's rich tapestry of laws, and find an offence under the Communications Act which they believe they can extend to cover Paul's tweet – a provision making it an offence to send a 'menacing message' over a public communications network.

This prosecution should surely have failed, due to it requiring both an actual act and an underlying deliberate intention to carry out that actual act (in legal terms actus reus and mens rea).  Legal experts have argued cogently that Paul's tweet was not a menacing message, and that he had no intention of sending a menacing message – it was a joke sent narrowly to his twitter followers.  He did not commit an actus reus and did not have any mens rea.

By now it appears that even the CPS realized that it was out on a limb, and so it mounted a weak prosecution against Paul at trial which it said itself it expected to lose.

The case is now due to be heard at appeal, where hopefully a 'real' judge will apply either some legal sense or common sense to the matter.

Did I mention that Paul has now lost a second job, due to his new employer finding out about his conviction and appeal?

Britain, the well-spring of much of modern democracy and freedoms, increasingly finds its well has been poisoned by officious fools with too much power and too little commonsense.  What would the original Robin Hood think of this new Britain?

More information :  A general overview of the case here, an explanation of how wrong it is by an attorney here, and commentary by Paul's girlfriend here.

1 thought on “Security Horror Story : Outrageous Idiocy in the UK”