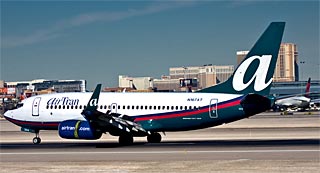 In an announcement that surprised everyone, Southwest this morning indicated its intention to buy AirTran and to merge it into its existing Southwest brand.

Southwest is paying an estimated $1.4 billion to buy AirTran, which is a 69% premium over AirTran's market valuation immediately prior to the announcement.  Over the last year AirTran had underperformed the market compared to airline stocks in general.

Southwest says that when it folds AirTran into its current operations, it will zero out AirTran's ticket change fees and baggage fees for the first two bags checked.  But AirTran made $210 million from those fees in the last year, and with a total net profit of $135 million (itself a best ever result for AirTran) one wonders what the profitability of AirTran's operations will be after this $210 million hit.

So why is Southwest buying AirTran and paying such a huge premium for an airline that may have been over-valued to start with, then destroying a large part of AirTran's profitability?  Has Southwest gone crazy, or is there another issue behind the scenes?

To find out more, please read my detailed article analyzing Southwest's purchase of AirTran and what it will mean for Southwest, for Delta, and for us as the traveling public.