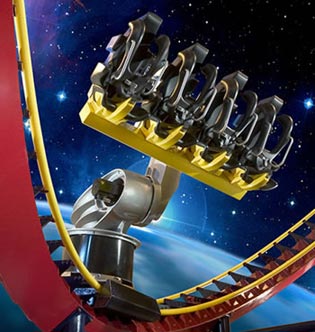 We're all familiar with the concept of airline seats that are too narrow for us (and for the people on either side of us) but there is precious little we can do in such cases other than to scrunch our shoulders together, or fork out the extra money for first class.

But have you ever had a similar problem on an amusement park ride with a seat too small?  Apparently the new and very successful Harry Potter and the Forbidden Journey ride(see illustration) at Universal Studios in Orlando suffers from seats that are too small for a significant number of would-be riders.  Universal is replacing some of the seats on the ride with larger sized seats, and has a 'sizing template' for guests outside the ride line so they can tell if they can fit in the regular seats or if they need to request an oversize seat.

I guess that is a sign of the times – we're all getting bigger, me included.

Another sad sign of the times is the closing of the Liberace Museum in Las Vegas, after 31 years of operation.

Trip Advisor has become a major force on the internet, and is a resource many people turn to when considering what hotel to stay in on their travels.  It has been plagued by accusations of fraudulent postings – both fake positive reviews from the hotels themselves, and fake negative reviews from competitor hotels.

There have also been stories of hotels incentivizing their guests to write good reviews.  But I think this story is the first time we've heard about hotels penalizing guests who write bad reviews.

When I'm evaluating Trip Advisor reviews, I place more weight on people who have contributed a number of different reviews of different hotels in different locations, and over a reasonable period of time.  They are less likely to be fake reviewers than the person who has only ever posted one review, with that one review being either a ridiculously positive (or negative) review.

I don't think Trip Advisor is a bad resource, but it shouldn't be treated as the ultimate source of information, and I regularly find hotels that get almost equal positive and negative reviews, making it hard to work out what the overall net impression of the hotel should be.  Your best resource?  A travel agent who specializes in the area, and who has visited the town/city, and who has stayed in at least one of the local hotels and visited some of the others, and all within the last 3 – 5 years.

Such a person not only has first hand knowledge of the choices open to you, but also sends other people to the hotels and so gets regular feedback as to which hotels are truly good and which are not.

Note I'm not saying that the best resource is a friend who has visited the location – such people, while probably keen to help, can't really offer you comparative reviews because they have almost certainly only stayed at one hotel and ignored all the others they didn't stay at.  They can tell you if the place they stayed at was good or bad, but they can't tell you if there is another place in town that might be better or worse.

So how do you find such specialists?  Here are two suggestions.  Ask the relevant tourist board if they have any type of specialist travel agent training program, and if they do, if they have agent graduates in your area you can contact.

Secondly, consider using the service offered by Tripology - this website distributes your travel needs to selected travel agents, and they pay Tripology a fee if they want to then contact you; only agents who feel comfortable and confident of being able to help (and to compete against other Tripology agents) are likely to hazard their own money up front.

Lastly in this part of the weekly newsletter, here's an internet game that runs on your web browser.  It tests your knowledge of European geography.  Warning – it may consume vast amounts of time you should otherwise spend working.

Part of the compelling nature of it for those of us who are competitive is the expectation that one's score will improve the more one plays it.  My best score is 27,700, which I actually scored on the second time I played the game (no, I'm not telling how many more times I've played it since then!).  Let me know if you beat me by much (max possible score is 30,000).