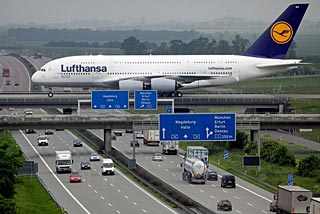 I've never believed that.  Airlines price their fares as high as they possibly can based on what the market will stand, and more or less unrelated to their costs.  That is why in a good year (such as 2010 is shaping up to be for most airlines), they have huge profits, and in a bad year they have huge losses.  This is rational sensible business behavior.

Anyway, it was interesting to note a confirmation of this lie of the 'passing savings on to passengers' claim in this article about American Airlines – one of the few airlines expected to lose money in 2010.  About halfway down, under the heading 'Revenue, Savings' is this sentence

By the end of 2012, American expects about $500 million in annual revenue and savings from its recently approved joint venture with British Airways Plc and Spain’s Iberia Lineas Aereas de Espana SA, a pending Japan Airlines venture and the “cornerstone strategy” for U.S. hubs.

Now maybe I am misreading this, but don't you too get the clear feeling that AA plans to keep all of these savings and additional revenues, rather than give them back to their passengers?

On the other hand, there is one bit of new generosity from AA to look forward to.  As of 1 October, they will start offering free drinks in their domestic Admirals Club lounges.

Which reminds me – if you haven't seen it before, you might want to check out my two part article on how to access airline lounges for the lowest cost.

This is just one of the many articles written in the last year that can potentially save you money and/or help you in your travels – and if you get some value from this or any of the other articles, please do consider contributing in our 2010 reader fundraising drive.

In other AA news, their projection of better third quarter revenues, with unit revenue improving by 9.8% to 10.8% compared to last year, provoked a reaction by the share market.  AA's share price dropped - yes, dropped – by more than 9% immediately after the announcement.  Details here.

Maybe they need to get even more aggressive about baggage fees.  But let's hope they don't get as aggressive as Iberia, as detailed in this article.

As I mentioned above, AA is one of the few airlines expected to make a loss this year.  Overall, IATA has just increased its projected total industry profit from the year, raising it from its former estimate of $2.5 billion profit (estimated in June) to a new estimate of $8.9 billion in aggregate net profit.

That's a huge leap up in only three months, and a great overall result, although to put it into context, the airlines lost about $10 billion last year.  More details here.

In the air, a similar concept might apply in the now rapidly evolving world of in-flight entertainment and communication.  After years with little change, the industry is now starting to exploit new digital technologies and capabilities, with the result being for us as passengers the wonders of on-demand movie selection, multi-channel entertainment, and, most recently, in-flight internet connectivity too.

One of the notable slow-adopters of in-flight internet has been Jetblue, perhaps because they had invested heavily in their seat-back entertainment systems.  But now exciting news is emerging that Jetblue will be adding state of the art Wi-fi connectivity with great fast broadband capabilities to its fleet.  The not quite so exciting news is that this is not expected to materialize for another 18 months or so, and the unanswered question is how much it will cost.

Did you like the picture at the top of this entry?  It is hard to get a sense of scale of an A380 when seeing it alongside other big planes, but this image of it alongside cars, trucks and buses gives a very vivid appreciation of its gargantuan size.  Here is a larger version of the picture.