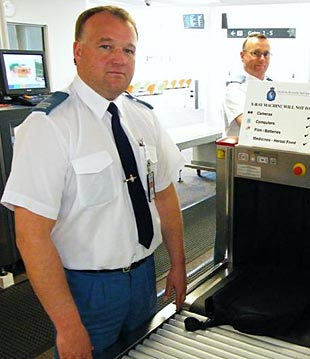 'We don't know who anyone is and we don't know what is in any of their bags or packages'.  In many places and circumstances, this would be an unremarkable statement to make.

But let me tell you who said it, where they said it, and who they were talking about.  This was told to me by the senior airport security officer at Auckland Airport, while standing inside the most secure part of the building – the departure lounge for the Qantas flight to Los Angeles (note – the picture illustrates a NZ airport security officer, but not one who was involved in the events described below).

For one of these people (that the senior airport security officer says she knows nothing about) to get into this part of the building, they first had to buy a ticket to travel to Los Angeles.

Second, they then had to submit personal information to the US Customs and Border Patrol several days prior to travel which was then vetted and responded to either with a permission to travel or a denial, or alternatively they had to obtain a formal visa only available via personal interview at a US Consular office.

Third, they had to check in for the flight at the airport, and show their passport and authority/approval to travel to the US at the ticket counter.

Fourth, they had to be interviewed by a New Zealand Immigration Official and have their passport scanned before being given permission to leave New Zealand.

Fifth, they had to go through the usual metal detector and have their carry-on items X-rayed.

But – wait. there's more.  After having walked through the secure part of the airport to the departure gate for the flight to Los Angeles, they then got to enter the 'super secure' area for this fllight, which required them to (sixth) present their passport and submit to a brief security interview, then (seventh) go through another metal detector and have their bags X-rayed again.

So the people that the senior airport security officer said she knew nothing about had already been vetted by one of her own staff, had gone through two metal detectors, had had their carry on items X-rayed twice, had been interviewed by a NZ Immigration official, had earlier shown their passport to the Qantas ticket agent, and had already been positively vetted by the US security services.  But the most senior airport security official who would talk to me told me she knew nothing about any of them or their belongings and implied that therefore they (and – more to the point, me too) could not be trusted and that they might have concealed bombs in their carry-on items.

When I challenged her on the absurdity of this, she refused to discuss the matter further, citing 'security' as a reason, and further giving herself as the absolute authority who had final and ultimate discretion on all matters.  When I pointed out to her that she was merely a rent-a-cop, wearing a uniform that more than coincidentally copied the NZ Police uniform as closely as possible, she said if I gave her any more trouble I'd be in 'hot water'.  I volunteered to be immersed in water of any temperature, and so she marched off to find the Qantas duty airport manager to see if I could be denied boarding due to committing the severe crime of questioning her authority.

Happily, I traveled back to the US without problems (thank goodness for the commonsense Aussies), but let's all ponder for a moment on the situation where the most senior security official at Auckland International Airport admits she knows nothing at all about the people that have been multiply screened and vetted and inspected every which way.  Truly – as I'll confess I may have also hinted at to her – the lunatic asylum is now being run by the lunatics themselves, and those few of us with remaining sanity are being severely challenged.

How is it that we give such powers to such idiots who can then assert them without any constraints imposed by common sense and without allowing us any recourse or appeal?

And does this make us any safer?  By the airport security official's own admission, all her security is useless, and she is left with being nothing other than a common garden bully in a rentacop uniform.

I was actually more fortunate in my encounter than a former Prime Minister of the Cook Islands, a tiny South Pacific nation, Commonwealth member, and closely affiliated with New Zealand.  Sir Geoffrey Henry was hoping to travel from Auckland to Noumea on an Air New Zealand flight and apparently made some sort of throwaway comment upon boarding the plane that a crew member interpreted as him saying that he was a terrorist.

The crew member reported it to the pilot, and the pilot, bless his sensitive soul, decided the comments were inappropriate and had Sir Geoffrey removed from the flight.

Making this abusive action on the pilot's part all the more obviously inappropriate was Air New Zealand's decision to allow Sir Geoffrey to travel on the next flight to Noumea.

Not only do we have rentacops in their fancy uniforms demanding acceptance of idiocy on the land side of the plane, we have more idiots, also in fancy uniforms on the planes making similarly stupid decisions that we as passengers appear to have no recourse or appeal against, or any due process to follow, and sadly again with no threat of any come-back for their lunacy.

Any airline with any shred of sense would fire the pilot on the spot for making a totally ridiculous decision.  In Air New Zealand's case, they instead refused to comment beyond merely confirming that an unnamed passenger was removed from a flight.  Wow – that's positive leadership, isn't it.

The insidious spread of the new airport whole body imaging devices continues to rush across the United States.  I say insidious because credible experts on radiation have raised alarming concerns about the level of x-ray radiation we are being exposed to when going through the machines.

The good news is that we have the right (at least at present) to refuse to go through one of these machines.  The downside to that is this is – perhaps understandably – considered a 'red flag' and so it means we'll get a secondary pat-down (as well as going through a traditional metal detector).

And now the other shoe is dropping on this.  The TSA are proudly announcing a new type of pat-down search that will be more invasive and more personal than the former rather delicate touchy-feely experience.

But, of course, this isn't designed to 'punish' people from refusing to submit to a possibly dangerous dose of X-rays.  Oh no, why ever would you think that?

Now for the really bad news.  The same types of radiation machines are now being mounted in unmarked vans and are being used by security services to conduct 'driveby' inspections of nearby houses, vehicles, and people on the street in general.  Two thoughts about this.

First, unlike at an airport, we surely don't have any opportunity at all to decline such a covert dose of radiation, because we'll never know we received it.

Second, how much massively more powerful must such machines be to operate from a distance of many feet from the target being examined, and to potentially punch through metal and building exteriors, instead of being aimed at people wearing only a light layer of clothing and only a foot away from the radiation emitter and receiver?

So next time you see a plain white panel van cruising along the street towards you, be aware that it might be filling you full of x-rays as it goes past.  My guess – more people will die from the radiation emitted from the van than will be saved as a result of such vans detecting terrorists and foiling terror plots on our streets.

I'd advocate wearing a tinfoil hat and underwear, but clearly if one of these units is powerful enough to shoot X-rays through the side of a car or van or house, and then have the X-rays still with enough energy to bounce back through the metal on a return journey back to the detector, then it will take a lot more than a few layers of Reynolds tinfoil wrapped around ourselves to protect us from this – oh, yes – harmless radiation.

More details, and a delightful promotional video from the company that makes these devices, here.