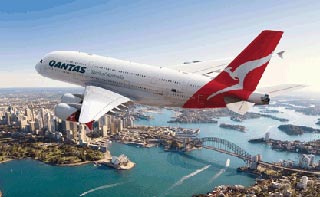 Airlines invariably justify codesharing as giving
greater convenience to their passengers.  I’ve never believed this claim for an
instant – there is nothing that uniquely can only be done via a code-share that
can’t be done through regular arrangements between airlines.  Codeshares are all
about allowing airlines to offer the illusion of competition while denying us
the reality of it.

My experiences today on two Qantas codeshare flights
illustrate the ugly truth of codesharing.  I flew a flight bearing a Qantas
flight number but actually operated by its wholly owned subsidiary, Jetstar,
from Christchurch to Auckland in New Zealand.  This then connected with a true
Qantas flight from Auckland up to Los Angeles, which in turn connected to
another code share flight bearing a QF flight number but operated by Alaska
Airlines to take me the rest of the way up to Seattle.

The first problem was that the Qantas confirmation,
while indicating that the flights were operated by other airlines, didn’t give
the ‘real’ flight number for each flight.  This is a trivial problem, but with
the Department of Transportation already setting some disclosure requirements on
codeshare flights, one wonders why they don’t also require a codesharing airline
to disclose not just the airline that actually operates the flight but also the
flight number.  So here I am, arranging to be met at Seattle airport, telling
people ‘I’m on an Alaska flight but don’t know its flight number’.  Not good.

Now for an astonishing second problem.  There I was
at the Qantas subsidiary airline’s checkin counter in Christchurch and they
refused to check my bag all the way to Seattle.  They said they’d check it only
to Los Angeles, but a ‘new policy’ meant they were now refusing to check it any
further.

My goodness me!  One of the ultra-key benefits of
codesharing is that bags are checked all the way through, seamlessly.  But not
on a Qantas codeshare.  It gets worse – in Auckland I was told by a surly Air NZ
employee/manager (Qantas contracts with arch-rival Air NZ for its customer
checkin functions and it has long been my experience that Air NZ likes to subtly
‘put the boot in’ whenever they can to make their competitor look bad) that the
100+ minutes connecting time was ‘very tight’ and I would be lucky to get my
bags off the Jetstar plane and onto the Qantas plane.  (This was when I asked if
they could retag the bags in Auckland, the answer being a resounding ‘No!’.)

Now for a slightly more subtle but still problematic
third point.  The Qantas flight to Los Angeles happily arrived massively early,
and there was a long scheduled layover anyway, so when I collected my bags and
took them all over to the Alaska terminal to recheck them, I realized that it is
an ill-win that blows no good, and due to being at the Alaska ticket counter
with my bags, I asked if I could take an earlier flight, there obviously being
no hassle with luggage already checked and going on the original flight.

The good news – yes there was an earlier flight with
plenty of seats.  But  because I was on a codeshare ticket, Alaska would
not/could not accept it on an earlier but non-code shared flight.  So I’m
spending four hours waiting for my flight.

Other downsides?  By flying on a QF designated
ticket, I lose the chance to earn qualifying miles for getting a higher level
frequent flier designation for next year, even though I’m flying on an Alaska
flight.  And I lose the opportunity to qualify for elite level mileage upgrades
on the flight, too.

2 thoughts on “The Disgraceful Dysfunctionality of Qantas Codeshares”