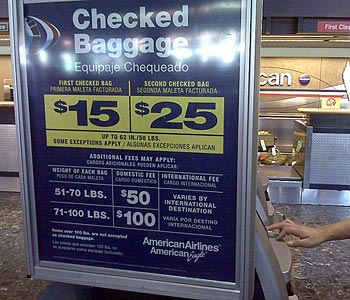 Southwest Airlines estimates it has picked
up $1 billion/yr in extra business from passengers who have shifted from
other airlines due to the other airlines charging for checked bags
(Southwest allows you to check two bags for free).

Southwest continues to aggressively promote
its 'Bags Fly Free' offering and says it is outperforming all other US
carriers when it comes to revenue, in part due to this campaign.
The free bags promotion is appealing primarily to leisure travelers, who
have always been a mainstay of Southwest's business, although these days
the airline says 35% – 40% of its customers are traveling on business.

But while the bag fee charging airlines may
have lost $1 billion in annual passenger revenue, they earned
$769 million in the first quarter of 2010 alone in baggage fees.

table of bag fee income by airline – it is not easy to equate this
to an annual equivalent because bag fees continue to regularly rise.
But with $769 million pocketed in the first quarter alone, it seems
reasonable to infer that for a full year at present fee levels there
will be close on $3 billion in bag fees received.

So, maybe there is method to the major
carriers' madness?  $3 billion in bag fees more than balances a
loss of $1 billion in ticket income.  They will make more money by
carrying fewer passengers – what the management gurus would proudly
describe as 'work smarter, not harder'.  On the face of it, this
seems sensible.

But there is also sense to Southwest's
approach.  It would seem reasonable to calculate that it is
strategically – and financially – better off by picking up $1 billion in
extra fare revenue and growing still further its market share of people
flying, than if it were to become a me too carrier and start charging a
bag fee, which would be unlikely to total $1 billion a year.

On balance, looking at the strategic longer
term (and the dinosaurs show little interest in long term strategy),
Southwest has the better approach.  By quietly but steadily growing
and growing, it has become the country's largest airline in terms of
passenger numbers carried, and the more passengers an airline carries,
the easier it becomes for that airline to grow more and more, due to a
type of 'chain reaction' whereby their route network can grow more
readily when there is already a substantial pool of passengers, of
market awareness, and infrastructure.

At the same time, the dinosaur airlines are
losing market share and are deliberately shrinking themselves – 'right
sizing' in management-speak.  Extend the concept of 'making more
money by flying fewer passengers' to its limit and sooner or later,
you'll have airlines making an infinite amount of money while flying
no-one nowhere.  That's obviously impossible, and highlights the
fact that at a certain point, 'right-sizing' becomes 'wrong sizing'.

The dinosaurs give out conflicting messages
about their desire to shrink.  On the one hand, they happily cut
back on their flights.  But then, a year or two later, they claim
they desperately need to merge with other dinosaurs, so as to get
'economies of scale' and 'synergies' and assorted other management buzz
words.

This is not a rhetorical question.  And
there is an answer to it.  Because, in the dinosaurs' vision of the
ideal world, they'd merge and remerge themselves all the way down to
probably two airlines and then enjoy a cosy duopoly, free from the
stresses of competition and other nasty things.

See more on this in my series about 'The
Death of Airline Competition'.