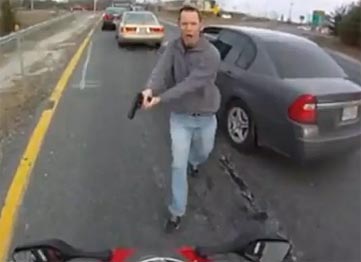 A staff sergeant in the Maryland Air
National Guard drove his motorbike at speeds way in excess of 80 mph
down I-95 in Maryland.  Unfortunately for him, he zoomed past a
state trooper in an unmarked car who gave chase and pulled him over.

The state trooper was not wearing a uniform
or showing a badge.  He leapt out of his car, pulled out his
sidearm, and without identifying himself, demanded the speeding sergeant
get off his motorbike.

So what would you think if that happened to
you.  An unidentified uniformed person in a plain unmarked car
pulls you over, points a gun at you and demands you get off your
motorbike?  Would you first think this to be a bona fide law
enforcement officer acting normally?  Or would you think this was
some sort of carjacking and fear for your life?

Fortunately, Staff Sergeant Anthony Graber
wasn't shot, and he ended up with two outcomes as a result of the
traffic stop.  One sees him paying a monetary fine.  The other
has him facing up to 16 years in prison.

He got the fine for speeding.  As for
the potential 16 year prison sentence, that is because he videotaped
the confrontation with a 'helmet cam' prominently mounted on his helmet
(you can see it reflected in the unmarked car window at 3 mins 13 secs
into the video linked in the next paragraph.  He is charged with
violating state wiretap laws, and had state police search his home and
confiscate his camera, computers and external hard drives.

16 years in prison???  Here's
the video he filmed
– the last 40 seconds or so at the end is the interesting bit and the
last 20 seconds has audio as well as video.

commentary on the issue – although the police are increasingly
videotaping us when they stop us, apparently there is a growing number
of cases where the police don't want to be videotaped in return, either
threatening to (unlawfully) arrest the person if they don't stop
recording, or bringing draconian charges against the person
subsequently.

Now please tell me again about how the US is
the land of the free?  Most banana republics treat their citizens
better than how Staff Sgt Graber is being brutalized by the Md State
Police.

It is deja vu, all over again, for

this lady in New York, each time she is ordered out of her car
and handcuffed while attempting to quietly and normally cross the
border from Canada back into the US.

What is wrong with our mega-billion dollar
computer systems and criminal data bases if they keep making the same
mistakes and can't be corrected?

The answer to that semi-rhetorical question
:  Lack of accountability.  Our 'security' services are
accountable neither to us nor to themselves.  Appalling
mistreatment of our fellow citizens is allowed to continue with the
citizens unable to effectively sanction the 'security' service and the
'security' service itself complacently not making those people
responsible fix the errors that are presently remaining uncorrected.

Our security services are almost exactly
and literally out of control.  In

a brilliant series, the Washington Post discovers that since 9/11,
federal security programs have grown to span 1,271 government
organizations and 1,931 private companies, all working on programs
related to counterterrorism, homeland security and intelligence, spread
over about 10,000 locations across the United States.  They
estimate that 854,000 people – nearly 1.5 times as many people as live
in Washington DC – hold top-secret security clearances (not just secret
but top-secret clearances).

So perhaps it is not surprising that they
also report that in the DC area alone, 33 building complexes for
top-secret intelligence work are under construction or have been built
since September 2001.  Together they occupy the equivalent of
almost three Pentagons or 22 US Capitol buildings – about 17 million
square feet of space.

Their conclusion :  The various
security related government departments (and all the related civilian
contractor companies) have become so large, so unwieldy and so
secretive that no one knows how much money they cost, how many people
they employ, how many programs exist or exactly how many agencies
are duplicating each other's efforts.

One wonders if the security forces in the
communist Soviet Union were ever as all pervasive, or as unaccountable.

It sounds like science fiction, but
T-rays – terahertz radiation – is rapidly becoming science fact and
may be coming to an airport security screening zone near you in the
foreseeable future.  Here's an

interesting article about how 'good' this will be from a security
point of view.  As for me, I stumbled a bit upon reading this line
in the article :

Many people are concerned about the safety of
terahertz radiation, though studies so far seem to suggest that low-level
exposure is not harmful.

Hmmmm…..  Substitute the phrase
'terahertz radiation' for 'cigarette smoke' or 'asbestos dust' or 'DDT'
or 'lead based paint' or 'mercury' or any of many other phrases, and you
have a similarly valid statement that would have been enthusiastically
offered up for years or decades before the realization dawned that the
cumulative effect of the thing was many times more dangerous/lethal than
first guessed at.

The FDA put drug companies through all sorts
of extensive procedures and require exhaustive testing before the drug
companies are allowed to release a new drug which we can voluntarily
choose to accept or not.  But the security industry seems to
have an open license to experiment with new technologies on us, the
general public, whether we wish to be their experimental guinea pigs or
not.

Lastly, don't think that we're alone in the
pervasive growth of security nonsense.  Here's an

article that talks about 150 new 'public security' laws in Italy.