The Icelandic volcano continues to cause occasional problems, depending on the amount of ash being emitted and which way the wind is blowing.

Earlier this week, airports in Scotland and Ireland were closed.  Currently, some airports in Spain and France are being occasionally closed.

No-one can guess how long such eruptions may continue.


What should you do if you are planning a trip to Europe?  Two suggestions – first, definitely travel a day or two early if this is possible, so you have a ‘just in case’ day or two up your sleeve in case of disruption.  Secondly, have a look at this map – the three black paths show the approximate flight paths that flights take from Los Angeles, New York and Miami to London, and the three purple paths show the flight paths to Madrid. 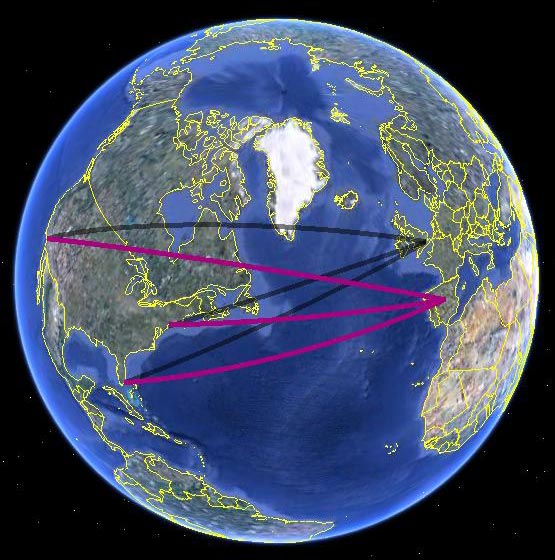 It seems that flying in to Madrid generally keeps you further away from the probable location of any ash clouds than if you’re flying to London or most places in western/central Europe (today’s unusual problems in Spain notwithstanding!), and flying from Miami  also keeps you further from the possible locations of ash clouds than does flying from Los Angeles, New York, or most other places.


Alas, not shown on this image, but readily imaginable, is the flight I’m hoping to take from Seattle to Amsterdam – this will go directly above Iceland.