The failed crotch bomber’s attempt to explode a device concealed in his underwear on a flight from Amsterdam to Detroit immediately prior to Christmas 2009 highlighted a well known security vulnerability that until then the security officials charged with protecting us and our flights had simply chosen to ignore.

This vulnerability relates to the fact that the metal detectors we walk through at airport security will only detect metal.  Most explosives do not contain any metal, and therefore can not be detected.

This has been a well-known limitation and therefore vulnerability, both by security officials and terrorists.  This is why we have to take off our shoes and put them through the x-ray machines, because the x-ray machines have some slight chance of detecting explosives hidden in shoes (this measure was introduced after the shoe bomber’s failed attempt).  This is also why we have limitations on liquids, and have to show our liquids to the screeners, because neither metal detectors nor x-ray machines can determine if a liquid is safe or explosive.

But what to do about the determined terrorist who has a thin pack of plastic explosive concealed underneath his clothing?  Or, for that matter, underneath her clothing – a woman’s body offers more opportunities to hide such things.  For example, a pack of plastic explosive formed into something looking like a feminine hygiene pad would be a great way to smuggle an explosive device through security.  And, of course, the padding in a padded bra, to say nothing of the cleavage space presents as another area where considerable explosives could be concealed.

The traditional solution has been to give physical pat down searches to people who have been selected for secondary screening.  If you have ever had a pat down search yourself, you will know that they are close to completely ineffective at finding an artfully concealed pack of plastic explosive.  Unless the security screener thoroughly gropes us in our most private parts, spreads our cheeks and shoves his hand between them, etc,  they will have no way of telling if a man is well endowed or packing some explosive, and similarly can not tell if a buxom lady has had her décolletage enhanced by the presence of explosive padding.  At present, sensitivity to people’s modesty is given higher priority than checking people’s private parts to see if they may have explosive devices secreted there.

The crotch bomber forced our security bodies to confront this difficult issue.  On the one hand, the normal traveling public would be extremely uncomfortable if each and every flight required an intimate groping.  On the other hand, the crotch bomber now made it impossible to ignore the security vulnerability posed by being sensitive to people’s modesty.

There had been two new technologies being trialed and selectively deployed around the world that seemed to offer a technological solution that would both reasonably protect passengers’ modesty while also reasonably allowing security officials to better understand what, if anything, maybe hidden beneath our clothing.

These two new technologies both provided “whole body imaging” – a person would go into a booth and an electronic device would scan them and project an image of what it saw onto a screen, allowing a security person to immediately see what was underneath the person’s clothing.  One of the technologies uses high-frequency radio waves, the other technology uses x-rays.

The devices have been controversial, and authorities have been slow to deploy them in the past, for several reasons.  One problem is that they create accurate and detailed images of the outline of a person’s body; causing the more prudish among us to object.  One has to believe that these people who were objecting to whole body imaging have not really considered what the alternative would be – a very close and personal grope.  The authorities have attempted to be sensitive to this point by arranging so that the person viewing the image on a screen is nowhere close to the person being imaged.  Nonetheless, some groups continue to complain vociferously about this, suggesting it is an abrogation of our human rights, and even suggesting that it may be illegal under child pornography statutes.

Another problem is that the process of scanning each person is slow, and the devices are expensive.  Instead of just walking through a metal detector without stopping, it is necessary to go to the specific booth, to stand in an exact position, and to wait while the machine scans you and your scan is then inspected before being able to move on and have another person follow you into the booth.  If everyone were to be subjected to whole body imaging scans, airports would need to massively increase the number of security lanes they have, perhaps fivefold.  This would be massively expensive, in terms of finding extra airport space, in terms of extra personnel to man the extra security lanes, and in terms of purchasing the extra equipment up front.

But wait.  There’s more!  These devices suffer from another two- and much more serious – problems.

Concerns continue to be raised about the safety of the scanners that use x-ray technology.  A report released today shows that some experts in radiation are questioning the government’s calculation about the safety of radiation dosages we will receive.  The government has calculated that the amount of radiation that the device gives to a person per scan, expressed in terms of their total body mass, is ridiculously low.  They claim you get more radiation naturally in five minutes of flying (when flying at a high altitude, a person receives a much more concentrated dose of radiation than while on the ground at sea level) than you do from the security scan prior to your flight.

But there may be a problem with how the government calculated this.  The government made the assumption in its calculation that the radiation is evenly distributed throughout our body (as is true of most other forms of radiation).  The experts now questioning the government’s calculation point out that this particular type of x-ray radiation is designed to only penetrate the very outer layer of skin.  They are saying that because this radiation is not evenly spread throughout our body, but instead is concentrated only on the very outer layer of skin, the actual radiation concentration on our skin is vastly greater, and so could be very much more harmful than the government figures suggest.

The second problem is even more fundamental.  The machines do not work.  While they will detect some things hidden beneath our clothing, and while they do a good job of showing off our electronically stripped naked body, any ‘artfully concealed’ explosive device is unlikely to be detected.

Here is an interesting video that shows a German security expert succeeding in smuggling an explosive device past a whole body imaging machine.

If you don’t speak German, it will be hard to understand what the people are saying, but just watch the video – it is easy to see what is happening.  Keep watching it most of the way through, so you can see the security expert subsequently detonate the device he smuggled through the machine.

In addition to this video, two presumably ultimately authoritative sources have indepedently confirmed the limitations of whole body imaging machines.  In the US, Janet Napolitano, the Homeland Security Secretary, is quoted in this article as saying “And I can confirm, no, the [scanning] machines do not see everything.”  Although she was saying this in the context of reassuring people concerned about personal privacy issues, isn’t the whole idea of these devices that they do see everything?  Doesn’t it rather beg the question that if the machines do not see everything, maybe they are not seeing explosives?

More alarming is what one of the designers of the security procedures at Ben Gurion airport in Tel Aviv, and its former chief security officer, told a committee of Canadian parliamentarians in late April.  They were investigating the state of aviation security in Canada.  He said “I don’t know why everybody is running to buy these expensive and useless machines. I can overcome the body scanners with enough explosives to bring down a Boeing 747.  That’s why we haven’t put them in our airport.”  Details here. 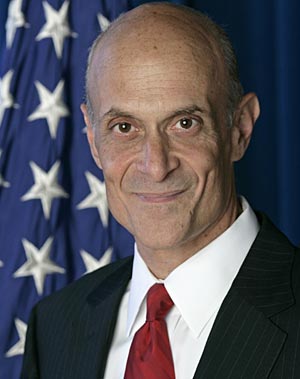 Maybe you wouldn’t buy a used car from this gentleman, but the US is certainly rushing to buy whole body imaging scanners from him.

He is Michael Chertoff, Janet Napolitano’s predecessor as Homeland Security Secretary, and now a paid lobbyist for Rapiscan, the company making the x-ray emitting whole body image scanners.  Apparently he is very good at his new job.