Almost the first thing Britain's brand new
Conservative/Liberal Democrat coalition government has done is to cancel
plans for the long-awaited and much needed third runway at
London's Heathrow airport.
To make matters worse, the government said it would not allow extra
runways that Gatwick and Stansted airports were hoping for, either.

Prior to being elected, the Conservatives
had stated they believed the best solution to London's airport
congestion would be to build high-speed rail links between London and
major cities to the north.  They believe that fast trains would
eliminate the need for many of the current small commuter flights that
travel to and from other British cities that are relatively close to
London (even Edinburgh and Glasgow are only 400 miles to the north), and
which would be well suited for high-speed rail service.  The
takeoff and landing slots freed by these small commuter flights could
then be reallocated to international flights.

It is unclear how realistic that expectation
is, and it is also unclear as to the timeframe in which high-speed rail
links would be established (probably 10 – 25 years).  Certainly,
for people simply commuting between London and somewhere else in
Britain, rail would be a viable alternative to flying (and already is to
an extent, even with slower speed services currently).  But for
those people who are flying internationally and connecting between a
domestic flight and their international flights at Heathrow, train
service becomes less attractive (although there are ambitious plans to
eventually add Heathrow to the future high-speed rail network).

One thing is clear, however.  If a
third runway is not to be built at Heathrow, then for the decade and
more until high-speed rail services may possibly alleviate some of the
pressure on Heathrow (and London's other airports), the value of slots
at Heathrow will remain high, and the consequential monopolistic
position enjoyed by British Airways on many of the trans-Atlantic routes
will remain. 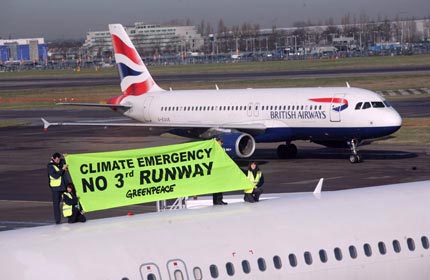 The movement that vociferously campaigned
against a third runway at Heathrow was formed in large part by misguided
environmentalists, backed up by the usual coterie of locals who don't
want more planes flying overhead.  The reality is that probably as
much or more jet fuel will be burned over London by delayed incoming
planes stacked up in holding patterns, impatiently waiting their turns
to land into whichever London airport they are flying to, and by the
extra jet fuel burned by planes on the ground in long lines waiting for
their turn to take off as would be burned by extra flights in and out in
an overall less congested scenario.

Inhibiting flights into Heathrow
won't stop air travel as a whole, but with no extra runways at LHR, LGW or STN, London's access to the world will become less convenient and more costly.  This will displace
flights, forcing airlines and people to fly less convenient routes,
which almost certainly will therefore increase the total energy consumed by travelers (due to
less direct routings).  So the environmentalists are scoring an
'own goal'.

London has five airports (see our series
all about London's airports
for more information).  The new government has banned runway
expansion at the three largest of them, a fourth (London City) has no
possible or practical way of adding an extra runway, and the fifth of
them (Luton) does not want to add an extra runway, even though it could.
Occasionally, plans are mooted to build another airport somewhere close
to London; might we see a revival of plans for a sixth airport yet
again?

This prohibition on extra runways does
nothing to benefit us, the traveling public.  It doesn't protect
the environment.  It will also encourage (and even require)
airlines and their passengers to locate their hubs for connecting
flights between North America and Europe somewhere other than London,
and causes problems for BA and its hoped for expansion at Heathrow – it
now has a lovely new terminal, but can't fill it with lots more
passengers and flights.  And so, this runway ban will likely lose
Britain jobs and foreign exchange as well.

Who exactly benefits from this decision
then?  Absolutely no-one.