The CDC has been criticized for its self-isolation guidelines, which reduced the period of quarantine needed for people who test positive for Covid, and allow people to clear out of quarantine without the need for testing to confirm they are free of the virus.  Normal practice, in most of the world, is that if you wish to leave quarantine early, you need to test negative at least once and often twice.

Perhaps in response to the criticism, the CDC released information on new research it had conducted showing the faster incubation period of the Omicron variant.  But, if you read the article, you’ll find an astonishing item mentioned.  Even though the US has been having over half a million people coming down with the virus, every day, the CDC study comprised a group of – wait for it – six people.  Six people???  Why not 60?  600?  Or any other larger number?

If the CDC is going to start making public health decisions based on six-person samples, I wonder what it now thinks about the 60,000 people who have participated in ivermectin studies (and which the CDC says still needs more evidence to be convincing)?

Talking about dubious studies, here’s one which claims red wine can reduce the risk of catching Covid, but drinking beer might increase the risk.  Oh – the number of subjects in this study?  473,957.  Of course, the sample size alone doesn’t guarantee the validity of the results obtained (my guess is there might be other lifestyle factors as well as just wine/beer drinking that are influencing these apparent outcomes).

What a hopeless bunch of incompetents.  Here’s an excuse being offered – supply chain backlogs.  But, if so, why did the government start accepting orders for something it knew it couldn’t supply?  How is it that the states can seem to get tests by the millions, but not the federal government?

Oh, and did you know the tests are coming from China?  Is there nothing we can make in the US these days?  We’ve had two years to create a domestic test-manufacturing capability.  Why isn’t there one?  With the increasing tensions between China and the US, we need to be restoring our industrial independence as an urgent priority.

Washington State is about to start giving away N95 masks, too….

There were some extraordinary changes in the minor country table.  The Faeroe Islands, a new entrant last Thursday, shot up to fourth place this week.  Gibraltar had moved to second place on Sunday and is holding that position today, too.  Israel has now appeared in tenth place – so much for its vaccination, booster, and second booster campaigns.

After, I don’t know how long, but I guess more than a year, the Czech Republic has finally been knocked out of first place in the major country list, with that “honor” going to France.  The UK dropped three places, and the US dropped one.

After all the changes in the two case rate tables, it was slightly reassuring to see no changes in the death table.  Of course, there were lots of changes in the countries listed by rate of new cases last week, with all the top listed countries reporting much higher rates of cases.  Super-vaxxed Israel, staying at the top of the list, reported over 5% of its entire country came down with the virus over the last week.

In Europe, Slovakia, Russia, Poland and Ukraine all registered over 100% increases in cases, week on week.  France is easing back from its explosion of new cases, with only a 7% rise, and Germany had a stronger 58% rise. 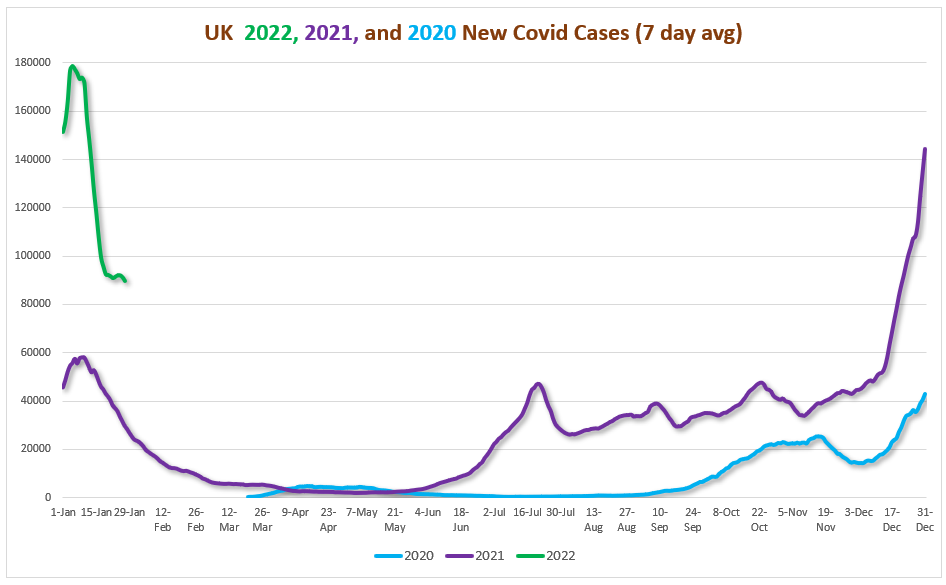 I’ve been very interested to see what is happening in the UK.  The nation as a whole is in large part considering that Covid has now been vanquished, but much of the last week saw no reduction in the still extremely elevated rates of new cases, and the week ended with a very modest 2% drop.  That’s far from a point where victory can be declared, and the last masks tossed in the trash.  The Covid puzzles persist – why does it suddenly shoot up, why does it equally suddenly plunge back down, and then why does it – again suddenly – stop dropping and sit, level?  It is like the virus is teasing us.

In North America, Canada’s numbered dropped again, by a good 28%.  Mexico stabilized with a 1% rise, and the US probably had about a 21% drop.

Items below include an article that includes two “warning phrases”, another Covid variation that is now displacing Omicron, monoclonal antibodies are out, Paxlovid is in, convalescent plasma is alarming, and ivermectin is still ignored, the NIH slow-walks its ivermectin study to avoid “discovering” how useful it is, the FDA is slow-walking another vaccine EUA request, an interesting lawsuit, are we undercounting Covid deaths, a counter-intuitive approach to international travelers, you have to really love opera to go to the Vienna Opera House, and Quebec acts strangely.