The Omicron virus variant continues to spread rapidly across the world, and within the US.  The last count I saw, dated yesterday, suggested it has been detected in 16 US states, and I know in my state of Washington, it is not just in the state but already distributed across three of our largest and most populous counties.

There have been some ridiculous headlines appearing suggesting Omicron is harmless, with the headlines saying things like “No-one has died of Omicron”.  It would be more surprising if anyone had died of Omicron yet.  It typically takes two or more weeks from a detected infection to when people start dying from the virus (often much longer) and then it can take another two weeks or more for a death to finally get through the system and be counted.  Two weeks ago, there were extremely few Omicron cases out there.

It will be another two weeks before we start to get a sense for the lethality of the Omicron variant, and not until early in the new year before we can start to draw valid conclusions.

Happily, it continues to seem the variant isn’t unusually more severe than “normal” (whatever that is).  As to if it is notably less severe, we’ll have to wait and see.

We know many people desperately don’t want to be vaccinated.  But this man was more desperately eager to avoid the jab than most.

There were no changes in the minor country list, although the world’s most vaccinated nation (Gibraltar) looks like it might be about to drop from being the world’s fourth most infected state.

Belgium rocketed up the major country list and is now in third place.

Poland appeared on the death list and went straight to ninth place.

And, as always, lots of changes in the case rate activity last week.  Europe’s runaway growth is stabilizing, with a mere 0.5% growth for the week.  But within that overall total are a mix of wild winners and losers.

Experiencing the highest rates of growth were France, with a 45% increase, Norway at 31%, and Italy at 23%. 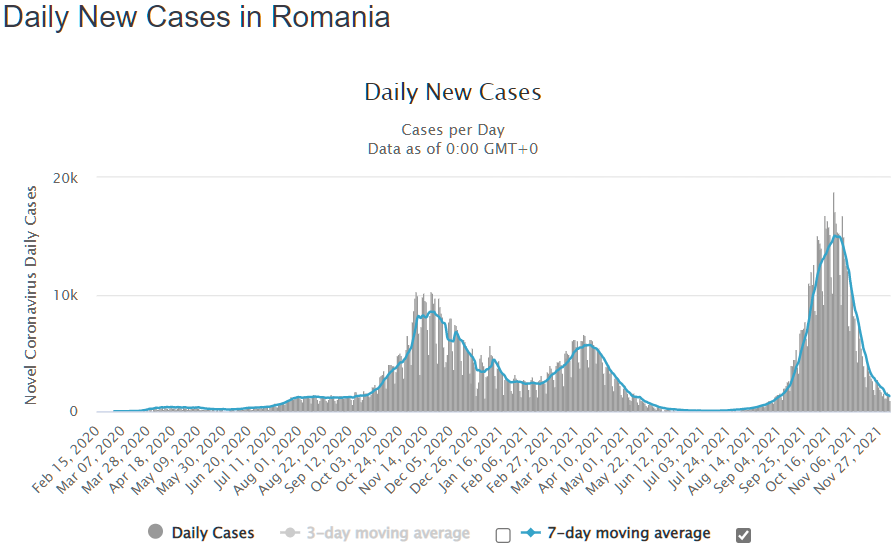 At the other end, Romania’s plunging case numbers continues as sharply (and inexplicably) as its earlier soaring numbers, with a further 36% drop, the same as Austria, which is also transitioning from being one of the worst affected to now being in recovery (that nationwide lockdown might have something to do with it!), and Iceland at 35%.  Germany had a 2% drop, and the UK had a 6% increase.

In North America, Canada more or less stood still with a 0.6% drop, while Mexico enjoyed a substantial 15% drop.  Canada had four times as many new cases per million as did Mexico.  As for the US, it is hard to estimate, because our authorities don’t like reporting cases over the weekend, but it seems likely we had what appears to be a strong rise, but in reality isn’t quite so bad, because the previous week we were massively undercounting cases over the Thanksgiving weekend.  Probably, overall, about a 10% increase.

South Africa had several days of astonishing growth before dropping over the weekend, and for the week, showed a 408% increase, although still only a reasonably modest 1,164 new cases per million.  I’m not sure if its Sunday figure is low because it too has incomplete reporting over the weekend, or if it is truly a drop, but that will become apparent in the next couple of days.  I’m tweeting South Africa’s situation each morning at present.

The world as a whole had a 5% increase in new cases.

Items below include a review of what seems to be an excellent new book, the Scottish Government returns to its Presbyterian roots and suspicion of modern comforts, more about Omicron, Dr Fauci’s boss shows he too can inspire headlines with statements of the utterly obvious, South Africa’s demands for more vaccine doses are again shown to be somewhat specious, it ain’t over ’til it’s over, and the unintuitive meaning of “permanent”.