It has been an unsurprisingly quiet few days since my last diary entry on Thursday night.  As expected, we’ve not had any semblance of accurate Covid case data from the US on Friday, Saturday, or Sunday.

To my surprise, the UK – usually clockwork reliable in its data releases – has been totally silent on Saturday and Sunday, and I can only guess as to the accuracy of information from other countries due to the Christmas closures of official Health Departments.  On the other hand, I wonder and hope that Canada has been doing a good job of continuing to report all new Covid cases, because it is reporting on Sunday an almost doubling of cases (a 92% rise) in the previous week compared to a week earlier.

So I’m going to make this a very short diary entry, and perforce without any of the numerical data that I usually love to surround myself with.

The major topic of course has been Omicron – how infectious is it, do vaccine boosters protect against it, what is happening in South Africa, and, most of all, how severe is an Omicron infection.

Surprisingly (or perhaps not), there still remains a lot of uncertainty on all points. 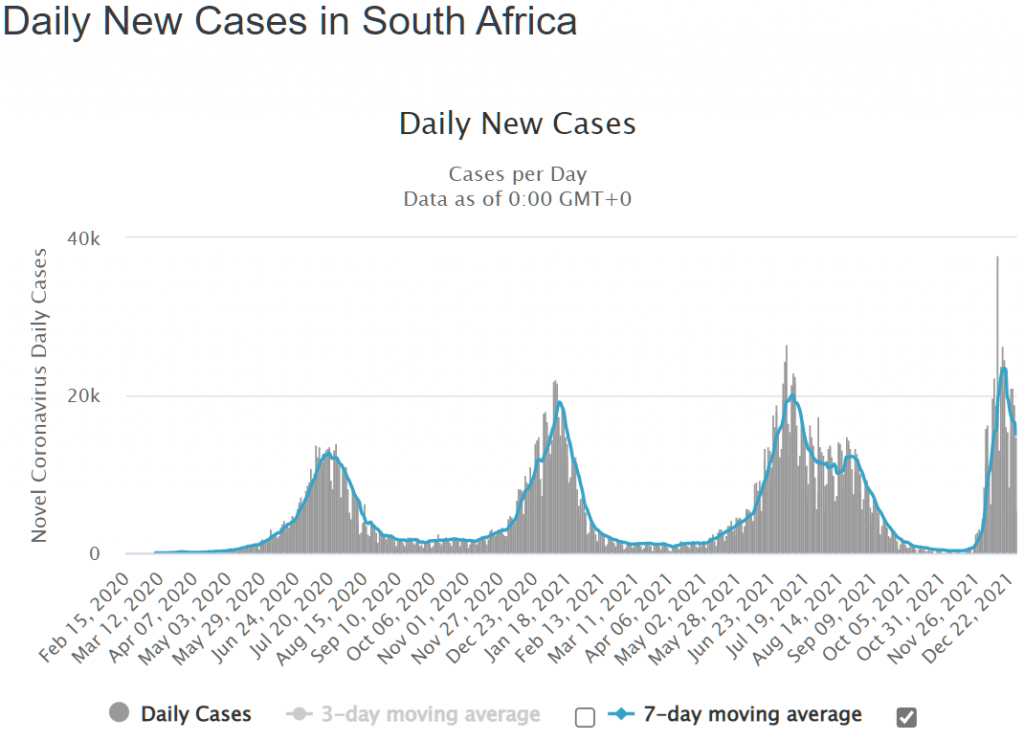 South African case numbers have continued to drop, although maybe that is due to incomplete reporting, particularly over the Christmas period.  Other reasons for the drop remain unclear, as does whether it is merely a temporary aberration or a reality that will be encountered in other countries too.  South African death numbers have at least doubled, maybe trebled, depending on what you consider the base rate to be, but considering that case numbers have increased about 50-fold, a doubling or two or three is astonishingly mild.

Also astonishing are claims that maybe most people in South Africa have some degree of immunity from having caught the Delta infection over our northern summer (which might be why either cases stopped rising, or cases are proving to be less severe).  In total, from Day One of the virus outbreak, a mere 5.6% of South African people have officially been infected by the virus (compare that to the US with 15.9%).  South Africa’s matching death rate is a bit higher than expected, so maybe the cases are more undercounted than normal in other countries, but there’s no way you can go from 5.6% to 70% or thereabouts without straining both assumptions and credibility to breaking points.

One study made what seems to be a significant finding, but in fact, is probably utterly trivial.  The study found that fewer people were being hospitalized for Omicron than for Delta and earlier variants, but if a person was hospitalized, their infection tended to be as severe as previously.  I say this is trivial because isn’t that the way hospitalization works – mild cases never result in hospitalization, only severe ones.

Booster shots – which I recall we were promised would last longer than original shots – are now being accepted as tailing off in terms of boosting within about ten weeks.  No-one is officially admitting this to be the latest of the many disastrous disappointments that has marked the entire vaccine program.  But, really – does this mean we’ll need five booster shots a year?  Every year?  I await with interest the vaccine apologist/enthusiast who rushes to assure us that this is perfectly normal for all vaccines….

Meanwhile, if you’d like some holiday reading, here are the presumably neutral Wikipedia entries on two possible downsides to vaccines – OAS and ADE.  How many shots of vaccine can one take before these or other challenges arise?

I’ve been expressing frustration, above, with the lack of reliable data over the last few days.  But, to be fair, in some cases, we’ve been without reliable data for much longer.  One of the “dangerous” topics that healthcare authorities have avoided highlighting has been data on “breakthrough” cases – people who have been fully vaccinated but who still come down with a Covid infection.  There’s a huge amount of data there that can guide us to the “least bad” vaccines currently and better inform us of the need for booster shots, but little is being transparently shared.  Or, in the case of Florida, none is being shared, whatsoever, neither by the FL Health Department nor by the CDC.  It seems likely this refusal to share data is not because the data is positive and encouraging and better than expected.

Here’s a great example of fake news.  CNN describes ivermectin in this article, first obliquely by attempting to include it with “groundless conspiracy theories”, dangerous misinformation, and patients demanding to be able to pick and choose their own treatments (which ignores the tens/hundreds of thousands of doctors rooting for ivm too….) and then introduces it as an unproven medical treatment.

Unproven?  That’s a term you could apply to all the big pharma treatments and vaccines, for sure.  But ivermectin has been more studied – and more proven – than any other possible treatment – with one exception, the exception being the original “controversial treatment” (because President Trump acknowledged it) – hydroxychloroquine.  The chart on this page shows the respective study counts for studies of all types of early/late treatments – paxlovid has two (both by Pfizer), remdesivir has 26 (with only a 19% overall benefit from its use), convalescent plasma (with a -1% effect – ie, it makes you sicker) has 14, while ivermectin (65% benefit) has 71 official studies and hydroxychloroquine ( 25% benefit) has 303.

If you limit the studies to only the outcome of early-treatment application, paxlovid stays at two studies, remdesivir drops to two studies, convalescent plasma (now showing a staggering -93% outcome – it is almost guaranteed to harm rather than help you) has three studies, while ivermectin (66% benefit) has 29 and hydroxychloroquite (64% benefit) has 33.

So – one of the best treatments, with the most studies, is described as unproven, while the expensive “official treatments”, with almost no studies and sometimes negative rather than positive outcomes, are described as proven.

Back to the article, which then quotes a doctor talking about his patients :

They insult your intelligence, they insult your ability, and most hurtful, they say that by not using these therapies you are intentionally trying to harm the people we’ve given everything to save.

If only Dr Lyons had the intelligence to appreciate how absolutely correct his patients are.  As for “giving everything to save” – I guess by “everything” he means “all the most expensive treatments, whether they work or not”, but he surely does not mean ivermectin or hydroxychloroquine.

The article goes on to describe ivermectin as a treatment for parasites such as worms and lice in humans, and to deworm horses.  Sure, parasites are a yucky concept, but so too is dying from Covid, and just because a drug works extremely well for one “yucky” thing does not mean it can’t work extremely well for others, too.

CNN – who should know better – then recycles the lies about ivermectin causing severe illness as shown by a sharp increase in reports of this to poison centers.  That’s not just an exaggeration, but has now been shown to be a lie.

The article expects us to feel sorry for the doctors who are so arrogant and ignorant and closed-minded as to refuse to consider ivermectin as a treatment to save the lives of their patients.  Somehow, I’ve more sympathy for their patients, dying untreated, than for the doctors withholding the life-saving medicines for no rational reason whatsoever.

I expect to have a regular diary entry on Thursday.