It is no great surprise that we have the highest number of Covid cases and deaths in the world, because we’re one of the largest countries in the world.  But, after adjusting for population size, and looking at numbers per head of population, we’re still one of the very worst in the world, and in recent months, the gap between us and other countries has widened rather than narrowed.  This article about our shameful dysfunction from The Economist doesn’t pull its punches.

Their headline grabbing statement – “[the US] daily toll of excess deaths is greater than in all other high-income countries combined”.

Why is it we send people to prison for accidental murder of a single person, but not for gross incompetence and betrayal of public trust leading to the unnecessary death of hundreds of thousands of Americans?

How have we allowed this to happen?  Let’s look at examples that partially consider the problem.  The first reminds me of something I sometimes do – I’m so stressed out by a horrendous task and deadline that I create a “displacement activity” to avoid attacking the main highest priority task.  I’ll suddenly decide I need to vacuum the carpets, or clean up my email inbox, rather than do whatever must urgently be done.  In the case of the country, which of the many displacement activities do you think stick out the greatest?  There are so many hotly argued unimportant issues surrounding us at present, aren’t there.

A related type of displacement activity is often found in corporate decision-making.  The classic example taught in business schools is the (mythical?) board meeting that spent 5 minutes approving the company’s billion dollar budget for the next year, while spending an hour debating a remodel for the executive bathroom.  In the case of the virus, we’ll argue to death (almost literally) some of the peripheral issues, such as what ages can be vaccinated, and who should get a third vaccine shot and when, while avoiding the key issue – are the vaccines actually worth the risk for most people under middle age at all? 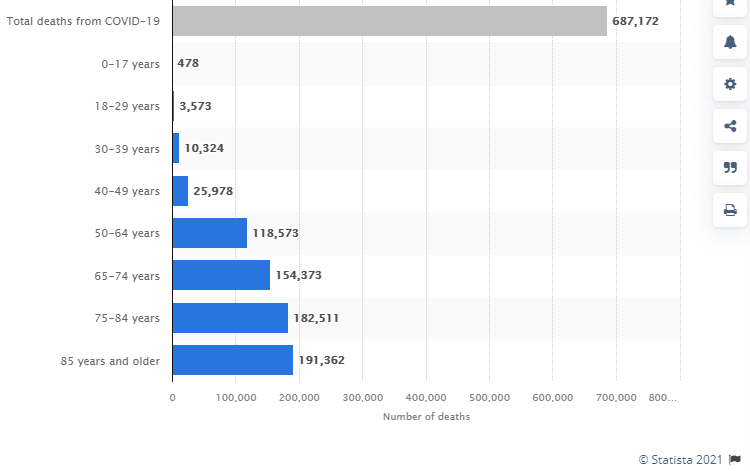 Look at this Statistica.com chart.  Why are we vaccinating children under 17, when only 478 people in that age group have died of Covid since the start of the outbreak?  There are about 80 million children in this age group.  That is a rate of 0.6 deaths per 100,000 children.  Compare that to this table, with child death rates from unintentional injuries of 6 – 30 times higher (in a full two year period), four times higher for cancer, and up to 12 times higher for murder.

That is of course looking at the two far ends of the age scale.  But what about simply splitting it more or less in the middle.  As you can see, the difference in mortality between people under and over 50 is astonishing.  Why are we arguing over a “one size fits all” approach when clearly it doesn’t?

And. back to my original point, while the benefit of the vaccine is clearly shown by the elevated risk of Covid death applying to older people, what about for younger people?  On the one hand, Covid poses no measurable threat.  On the other hand, they have decades to potentially suffer any consequences of these new style “vaccines”.  It is a matter of conjecture how many people have died from the vaccines so far, but some people credibly suggest more than 20,000.  Does that mean, for the under 17 year olds, the vaccine is more deadly than the virus?  Possibly, yes.

An example of focusing on the really easy thing but ignoring the huge big hard thing might be our approach to our border with Canada.  Canadians still can’t drive across it, even though there is much less Covid prevalence in Canada than the US, and even though we’re about to allow people from almost every other country in the world fly into the US.  Why are we focused on controlling entry to the US across “the world’s longest undefended border” but allowing people from everywhere else in the world to visit?  Why restrict Canadians, who are more than three times less likely to be infected than we are, but not restrict ourselves?  This article asks that question.

And now, saving the best for last, here’s an unbelievable – but almost certainly true (taken from this article) story of how doctors are responding to patient requests for ivermectin.

I’ve had doctors actually say to my client “You should consider removing life support”, and the client said, “No, I want to try ivermectin,” and the response was: “I don’t know, that could have negative effects.”

The UK rose one place in the major country list, and is within reach of passing Argentina in the next week.  Belgium and Spain swapped places.

There were no rank changes in the death list, but the US might climb a place in the next week.

The usual strong swings occurred in the Covid activity last week table, with the US, enjoying great drops in new case numbers at present, falling off the bottom of the list (with a rate of 2,298 new cases per million in the last seven days), a 14% drop.  Canada had a milder 4% drop to almost one-third the case rate of the US (761) and Mexico rose 5%, up to 446 cases/million.

In Europe, Romania suffered a 60% rise in cases, with Latvia seeing a 55% rise, Poland up 26% and the Czech Republic lifting 15%.  Switzerland enjoyed a 22% drop in cases, that being perhaps the only thing it has in common in the last week with Albania, while Sweden and Montenegro had a 20% drop.  France and Italy both enjoyed 17% drops, and Germany hovered uncertainly with a 0.7% drop.  Europe as a whole had a 7% rise, but the entire world dropped 9%.

Items below include YouTube’s CEO says one thing while simultaneously doing the opposite, a really nasty sounding Covid symptom, insurance companies fail to see the whole cost picture, what science – if any – is underpinning the US decisions on acceptable vaccines for visitors to have had, a strange claim but from a source that shouldn’t be (but apparently is being) ignored, multiple mysteries about vaccines and their booster shots, and the awkwardness of “fighting the last battle” while the enemy is engaging us in the next battle.