The more things change, the more they remain the same.

That’s not an adage we want to see in the context of the global fight against the Covid pandemic, is it.  But, truly, it seems to be alarmingly close to the truth, with Covid case numbers now clearly rising worldwide, including at a still mild but growing rate in the US (11% for the last week), and a massively higher 70% rate in the UK.

There are two very alarming aspects to the newly rising case numbers we’re experiencing at present.

The first is that no-one (in the US) seems to care or even acknowledge it is happening.  My home state of Washington eliminated all restrictions on 1 July – a date it had set months earlier and was determined to keep, no matter what was happening, and clearly considering the battle to be over and won, even though we continue to have over 350 new cases every day – a level of new cases on a par with Belgium, higher than Greece, and 20% higher than the US national average.

Many other states are doing – or already have done – the same thing.  Last year, this time, we were locking the country down with similar case numbers, this year, we are removing the few remaining restrictions.

The second alarming aspect is that we know why cases are rising again, and we know they will continue to rise if we don’t do something about this.  The reason for the rise is the growth of the new Delta variant of the virus.  We know what to expect because we can learn from the UK’s experience, where the Delta variant took hold and grew about a month sooner. 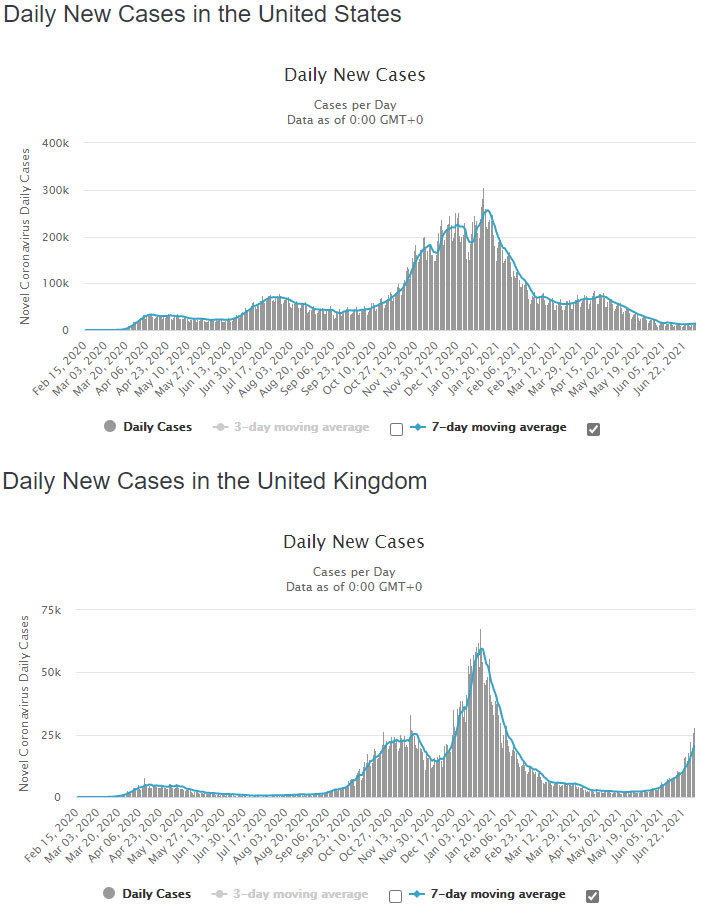 The UK’s approach to handling what is now becoming a full-fledged crisis is similar to what we are currently doing – to largely ignore it and act as though all is well.  We can see how well that strategy is working for them, and there’s no reason to expect it to work any better for us.

Let’s zoom in on what is happening in the US over the last week or two. 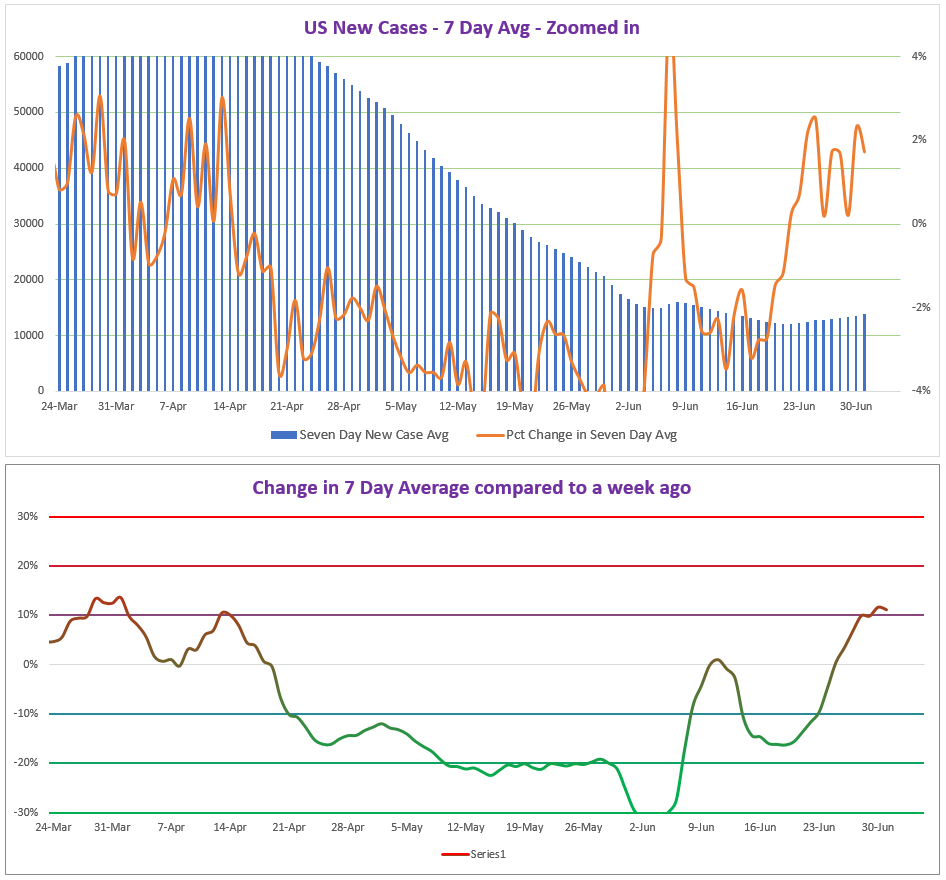 We’ve gone through a shorter plateau and already our new cases are starting to inexorably rise.  There have now been ten days in a row of rising new case numbers.  How far will they have to rise before we do something to stop the rise?

Some people are saying “there aren’t as many deaths now” and suggest that, for this reason, we can ignore the rising numbers (and associated deaths).  It is true that death rates as a percentage of new cases seem to be lower, but we are learning that death is not the only outcome to fear from a Covid infection.

“Long term Covid” is a phenomenon experienced by perhaps about one third of all Covid sufferers – extended malaise, illness, inability to concentrate, and lack of strength and stamina.  Brain damage, ongoing risk of blood clots, permanent loss of smell, and assorted other nasty outcomes are also sometimes suffered.

Other people excuse our growing acceptable by saying “People are tired of the whole Covid thing” or “People want to enjoy themselves again”.  Did we say that when locked in a “to the death” fight against our enemies for six years in World War 2 (well, okay, for only 3 1/2 years for Americans)?  This is another “to the death” struggle, and already, almost 50% more Americans have died of Covid (621,000) in little more than a year than died in the 3 1/2 years of WW2 (417,000).

The Czech Republic remains top of the major country list, and is likely to stay there for some time to come, because its case rate has started growing again.  Argentina, Colombia and Brazil all rose on the list this week.

Colombia moved up one on the death rate list.  The US continues to slowly but steadily close the gap with the UK, and possibly by the end of July will have overtaken it.  This is not a good thing.

The most active list for last week has the usual major changes, including a notable new addition – the UK, which saw a massive 70% increase in cases from a week earlier, and is now registering 2,113 new cases per million for the last week.  The US had an 11% increase, and 289 cases per million, with the world as a whole showing a 3% rise in new cases.

As always, I’m extremely puzzled by countries that swap from major increases to major decreases – for no apparent reason.  Take Uruguay, for example.  Just a couple of weeks ago it was one of the most struggling countries, and now it has disappeared.  Or who can forget the headline grabbing situation in India. 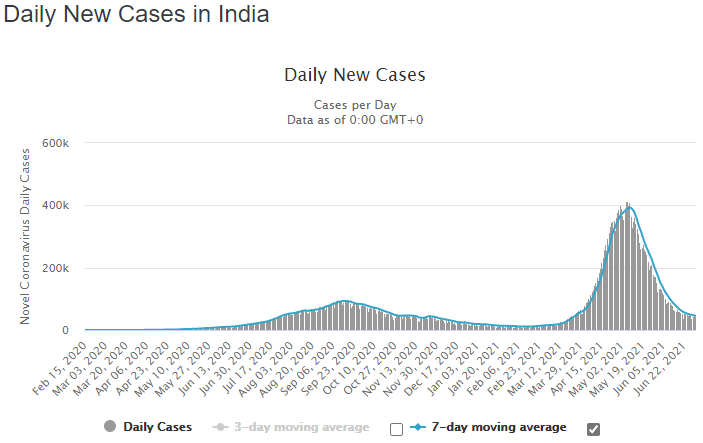 Look at India’s chart – truly a terrifyingly steep rate of new case growth, but then almost overnight, an equally steep plunge in cases.  What brought about the sudden soaring numbers of new cases, and – most importantly of all – what happened to stop it?

It wasn’t natural herd immunity.  Even now, India has recorded only a 2.2% total number of cases (we in the US are at 10.4%).  It isn’t vaccination – India has only 4% of its population fully vaccinated.  Some people suggest it was the country’s partial deployment of ivermectin, but much as I agree that IVM is very effective, I don’t accept that explanation either.

What suddenly happened, twice, to make such profound changes – a sudden soaring of cases, and then an even more sudden plunge?  Both questions demand answers, because if we can answer them, we might find clues on how to prevent similar sudden rises in cases in other countries (including our own), how to combat rising numbers and how to quickly squash outbreaks.

I’m keeping today’s diary entry short, not only because of the holiday weekend, but because I’ve been somewhat “hors de combat” this week – not due to Covid, thankfully, but due to another implacable enemy – toothache.  But, short as the diary entry is, I hope you agree there are items worthy of consideration included.

Assuming my toothache miraculously goes away, I’ll be back with more content on Sunday….  However, I fear that doing nothing is as inappropriate a response to toothache as it is to Covid.  I wonder if ivermectin would help!?