An extraordinary thing happened in England this week.  On Monday 19th, England removed the last of its remaining “lockdown” measures, a move widely criticized as surely leading to a massive increase in new virus cases, and a move that was all the more inexplicable due to the soaring number of new Covid cases, every day, that had been happening steadily for the two months previous to then.

Usually it takes 3 – 5 days for Covid symptoms to appear after getting infected, sometimes a bit longer.  Allow an extra day or two for people to get tested, and their results recorded, and it seemed to me that by Friday, we might be starting to see further life in UK cases, and certainly by today (Sunday).

But, an extraordinary thing happened.  The rate of new cases first faltered and reduced on Monday/Tuesday, stalled on Wednesday, started falling on Thursday and Friday, then plunging dramatically on Saturday and Sunday.  This was the absolute utter total opposite of what everyone had been predicting and grimly bracing for.

This is the most dramatic sudden change from steeply rising to steeply falling cases that has ever happened in the UK.

What caused it?  Theories abound, but none stand up to careful analysis.  It is true that both the Euro soccer tournament and Wimbledon tennis tournament ended on 11 July, but the thing is that prior to both these events, cases were strongly rising, so after the events, there is no reason to expect a sudden plunge.  It is true that people continue to be vaccinated, but, just like in the US, at a much slower rate than before so this wouldn’t suddenly change things.  It is also true people continue to get infected and recover, adding to “herd immunity”, but that is at a rate much lower than the vaccination rate, so that wouldn’t cause a sudden change in case rates either.

What makes this all the more inexplicable is that the same thing has happened before, both in Britain, and in other countries, too. 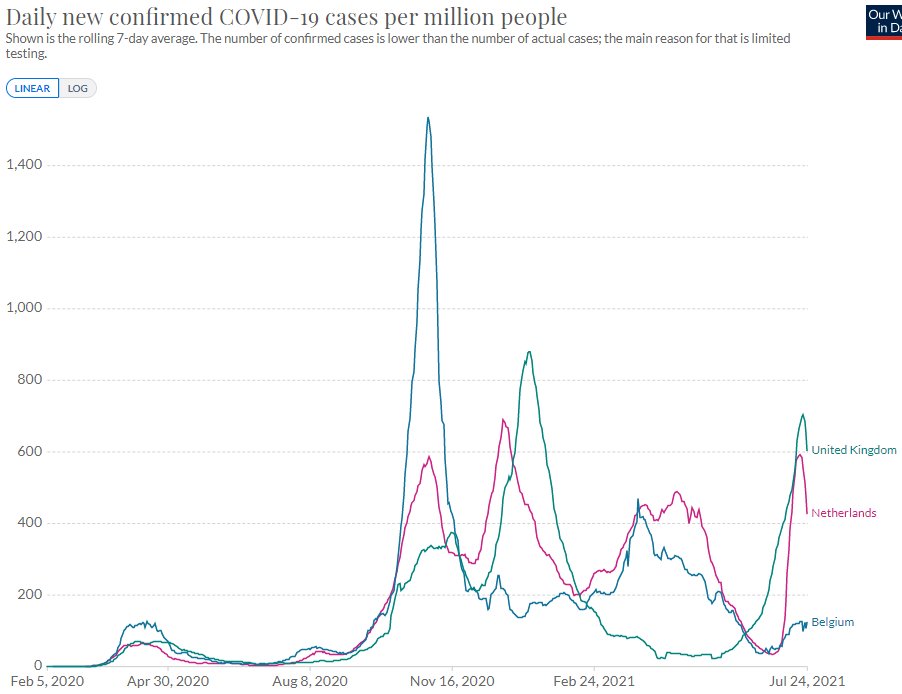 As you can see, Britain had an earlier peak and plunge in January, the Netherlands is currently copying what is happening in Britain with an even sharper rise and fall, and look at what happened in Belgium in late October.

As I’ve often said before, we desperately urgently need to know the answers to two vital questions :

(a)  What triggers these extraordinary rises?

(b)  What causes them to equally suddenly and dramatically collapse again?

The extraordinary element of it is the date it was written – September, 2013.  Sadly, the concerns and issues are as topical (and unchanged) now as they were eight years ago.

Talking about extraordinary things, there was a revelation of surprisingly mixed messaging emerging from the White House.  They are not requiring their staff to be vaccinated.  Sure, they’re telling us we need to get vaccinated, and eagerly supporting governors that seek to send people door to door, syringe in hand, to gently compel people to be vaccinated.  But for themselves and their employees?  It is optional.  “Do as we say, not as we do”.

Here is a point which needs to be stressed.  If you’re planning on traveling internationally, remember that you are creating both some known risks and an often overlooked risk.  The known risks are that you might come down with the virus prior to travelling and not be able to go, that the country you want to visit might close its borders, or might introduce restrictions making a visit there unenjoyable, and so on.

The overlooked risk also needs to be considered.  You might test positive prior to flying back to the US (and remember, even vaccinated people can still get a mild case of Covid and test positive), and end up required to self-isolate (or, even worse, formally quarantine in a special quarantine facility) for up to two weeks in the foreign country you’d been visiting, and at potentially great cost for the extra stay, to say nothing of the disruptive effects of not being able to return home when you expected to.

I’m not saying don’t travel internationally; but I am saying you need to keep all the risks and possibilities in mind when deciding what you might do.

In the minor country list, the swap between Gibraltar that first appeared in Thursday’s Covid diary entry is mirrored in the Sunday-Sunday data too.  This is a reminder of how real it is that vaccinated people can still get infected, and as you’ll see in the additional material below, Israel has a very disappointing analysis of the effectiveness of the Pfizer vaccine against the Delta variant.

In the major country list, the US drops an amazing two places, even though our case numbers are rapidly rising.  Perhaps it is better to describe this not as a drop for the US, but as a rise for Argentina and the Netherlands.

Appearing back on the major country list for the first time in quite a few months is the UK.

The UK, after its plunging numbers in the latter part of the week, ended up with a 15% drop in case numbers compared to the previous week.  With very few results over the weekend reported in the US, I’m forced to estimate a 55% rise in cases over the last week.

Items below include two different articles about Dr Fauci, both critical, big pharma’s race to come up with something as good as ivermectin but more expensive, how effective is the Pfizer vaccine against the Delta variant, the spread of the Delta variant, and the US is giving up on bothering to accurately and quickly report new Covid case data.