Recent days have seen a couple of key events in terms of shaping our expectation for what the next few months might have in store for us and our summer international travel plans to the UK and EU.

I’ve been increasingly anxious over the last several months, while observing the disparity between the EU’s steady march towards a framework for international travel and what Britain has been doing.  Curiously, although Britain has been one of the very best achievers in the entire world when it comes to vaccination rates, there’s been utterly no indication of any forthcoming policy allowing vaccinated visitors to avoid the otherwise mandated need for quarantine upon arrival.  Perhaps this is because of the domestic controversy in the UK, similar to here in the US, about the concept of “vaccination passports” as a prerequisite for various domestic activities and “freedoms”, making politicians reluctant to touch the topic at all for fear of alienating some voters.

The first of these two key events was on Thursday, and sadly a massive disappointment – after a one-on-one meeting between President Biden and Prime Minister Johnson that was widely expected to result in an agreement for a resumption of travel between the two countries, the leaders merely issued an empty meaningless statement about creating a task force to make policy recommendations about how to proceed.  No timing was given for when the task force would be established, when it would report back, or when its recommendations would be acted upon.

In such a case, it doesn’t require a degree in rocket science to guess that little will happen any time soon, and certainly nothing in time to still allow reasonable planning for UK travel in June, July, or probably also August and September.

The second key thing was my hope that the conclusion of the G7 meeting in Cornwall today would see the G7 leaders agree on a unified travel policy – maybe Biden and Johnson had simply delayed their own announcement so it could be broadened to include the EU and other nations?  A far-fetched hope perhaps, but like a drowning man, I was very keen to clutch at straws!

Alas, the 25 page official communique at the end of the meeting offered merely a single point in the middle of the announcement that says

This is a classic example of politicians congratulating each other on “a job well done” while the actual reality of any accomplishment is totally non-existent.  Just like the US-UK announcement on Thursday, there’s total silence on who will do what, when, where, and how.

Meanwhile, Britain’s problem with rising new virus cases continues, and most observers are predicting that England’s planned “total re-opening” (for local residents, not in terms of allowing in foreign visitors) that had been anticipated late in June will be pushed back.  We’ll know more about that perhaps on Tuesday this coming week, but the matter is somewhat meaningless to would-be visitors if we can’t get in to Britain in the first place.  If Britain is considering delaying its return to domestic normalcy, it certainly suggests there’s little pressure to open the country up to visitors. 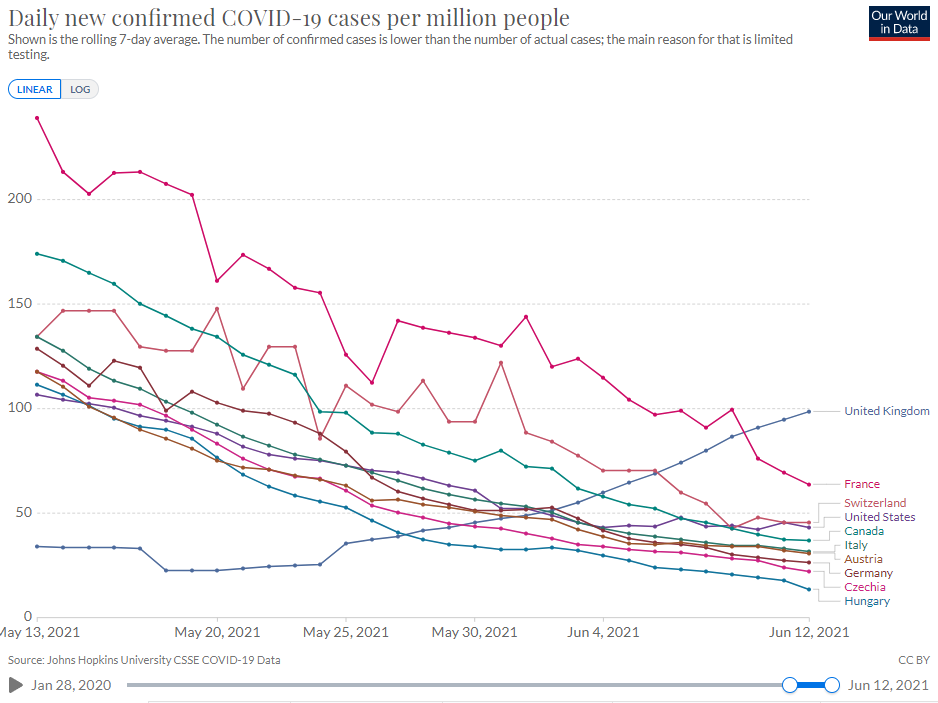 The bottom line seems there is almost no chance that the next few weeks will see us move to a situation where the US and UK announce an agreement to guarantee easy travel to the UK and back.  Worse, there is increasing rather than reducing uncertainty about exactly how open and free of restrictions Britain will be in the next couple of months.

For these reasons, and recognizing the need we all have to plan such things in advance, I have canceled the three tours I had scheduled to Britain in August and September.  It seemed the only responsible and appropriate thing to do.

On the other hand, travel to Europe seems more like a possibility in the next month or two.  The Europeans have created a framework for a digital “vaccination passport” that is now taking effect within Europe for themselves.  They are open to extending its functionality to people from other countries too, but there is not yet any information on how we can register for their digital passport and most of all, how we can prove that we’ve been vaccinated.  Will those little handwritten slips we were given recording our vaccinations be deemed sufficient proof, even though anyone can create a fake one or get one online with no difficulty at all?  Or will the Europeans require something more official, and what could that possibly be for those of us already vaccinated (particularly because we didn’t need to prove our identity prior to being vaccinated)?

I am reasonably confident these issues will be resolved, although the “when” remains unclear.  The Europeans are massively ahead of the Brits already because they’ve recognized the key role that vaccination plays in re-opening their borders to tourism (and for business travel too of course), and the concept of open borders is a key part of the European mindset and life these days.  With Europe, it is just a case of sorting out the details, the policy issues have already been agreed.  But Britain has yet to acknowledge the vaccination factor at all.

I see river cruise companies and other European tour operators are restarting their travel programs in late July, and that’s an encouraging sign.  I’d not want to be among the first Americans to head to Europe, because it is possible there may be some initial inconsistencies in how things are implemented, but by late summer, things should have settled down.

So I’m comfortable offering a December Christmas Markets Tour & Cruise, with us traveling through the Czech Republic, Slovakia, Hungary, Austria, Germany, Liechtenstein and Switzerland – all being members of the 26 nation Schengen open-border travel treaty.  Five people have joined already – three of them on variously their second, third, and fourth Christmas Markets cruise with me, so it is going to be a great group.  You’d be most welcome to come, too.

In related news, there had also been hopes that a face-to-face between President Biden and Prime Minister Trudeau of Canada, while both were at the G7 meeting, might have seen a more sensible policy regarding the border between Canada and the US.  Frankly, it seems to make no sense to have the border shut at a time when our state borders are wide open.  But Trudeau said “no deal” until his country has improved its vaccination rates further. 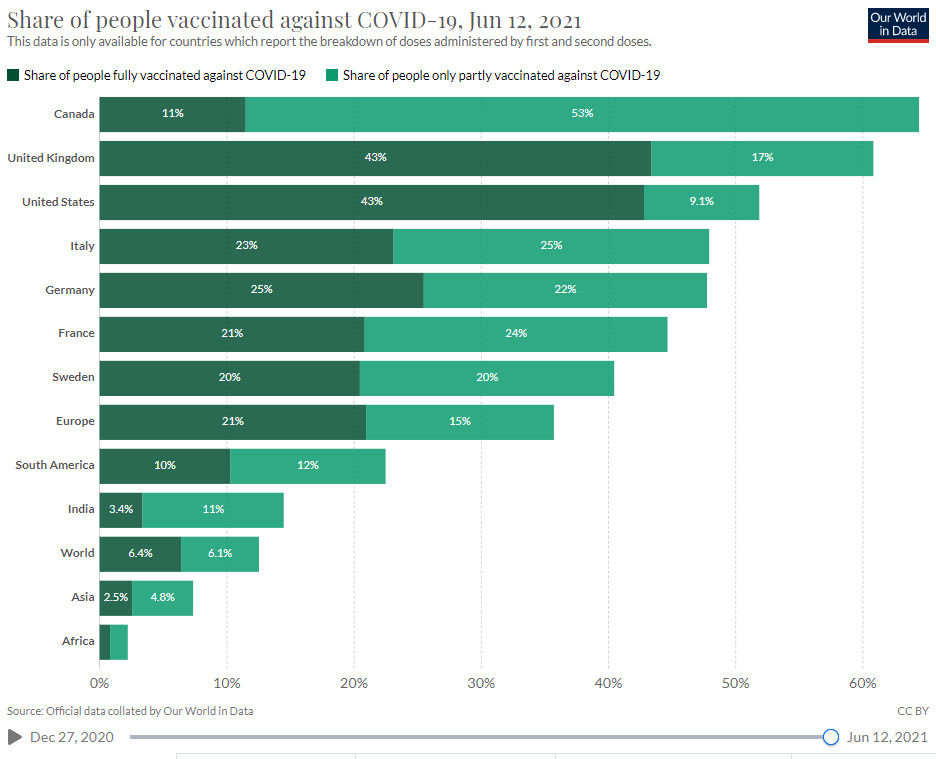 As you can see, Canada has chosen to ignore the vaccine guidelines, and has been concentrating on giving people first doses of vaccine, without focusing too much on second doses.  So in total, a lot of Canadians have had at least “a taste” of the vaccine, but only 11% have been fully protected.  If Mr Trudeau has a specific vaccination target, either for partial or full vaccinations, the article didn’t say.

As for further into the future, sooner or later the various vague “task forces ” will form, pontificate, report, and have their reports acted upon, and that, together with presumably ever-increasing vaccination rates, should make 2022 travel to both Britain, more of Europe, and in general, much of the rest of the world a more sure thing.  Here’s hoping!

A reminder of the dangers of opening too soon, and of the need to set realistic expectations, is the news that two passengers became infected on the first cruise – in theory with all passengers vaccinated – to operate in North America.

This should not astonish us.

The very best case scenario is that one out of every twenty people who have been vaccinated will still become infected with the virus; the most positive thing about the vaccines is their reduction in severe and fatal cases, rather than their reduction in infections overall.  So with 600 people on the cruise, is it surprising that two people (sharing the same cabin, so linked cases) became infected?  Not really.

In addition, who is to know who is really vaccinated or not?  Anyone can create a fake vaccination “certificate” within a few minutes – they’re not even typed, just handwritten, most of the time.

Something else which may or may not be a giant nothing-burger is news the CDC is to hold an “emergency meeting” about heart inflammation affecting a very small number of people after being vaccinated, mainly with the Pfizer vaccine.

We find it interestingly inconsistent how the CDC decided to suspend the J&J vaccine first, then meet to discuss it second (and withdraw the suspension), but for the Pfizer and Moderna vaccines, the CDC’s approach is to meet first and decide second.

As I mentioned on Thursday, I’m stopping reporting on US state numbers, unless something unexpected occurs.

In the minor country list, Gibraltar happily dropped another place, while Seychelles climbed two, and Lithuania displaced Aruba at the bottom of the list.

There were a couple of swaps in the major country list (Argentina and France, Poland and Chile).

The first seven places stayed unchanged in the death rate list, but then the US dropped two places to tenth, with Argentina climbing two places to claim the former US position.  It will probably be some time before the US drops further.

And in the last week’s activity list, the “usual suspects” continued to control the top of the list, while the rest of the list showed major changes.

Items below include a promising new method of detecting Covid, but with some practical challenges associated, is Chile showing us that vaccines aren’t working, or are its numbers to be expected, how to boost the falling vaccination rates in the US, a great reference list of vaccines currently approved or possibly soon to be approved, US new case trends, and what can we learn about numbers in Sweden currently and historically.