First of all, a reminder.  Friday is the last day my book, “The Covid Survival Guide”, will be on sale at the special discounted price of $1.99 for the Amazon Kindle version.  It returns to $8.99 on Saturday.

The US passed through another “milestone” type number earlier this week, when it exceeded 33,264,321 reported cases.  What is the significance of that number?  It is exactly 10% of the country’s population, meaning that now slightly more than one in every ten people has officially been reported as having had a Covid infection.

The actual number of cases is thought to be at least 50% higher, due to people having the virus without any symptoms.

At the same time, we’ve now recorded 594,006 official deaths from the virus.  Or have we?  Astonishingly, that number is even more inexact than the count of infections, and this article suggests the actual number might be in excess of 950,000 (the article says 905k, but since the article was published there have been 33,000 more official deaths recorded, so that implies a current total around 950k).

It is interesting to note that the discrepancy between officially reported and estimated numbers is greater for the US than it is for most other western nations – how appalling that we can’t even accurately count our deaths.  On the other hand, keep in mind that some people claim we have been massively over-counting our Covid deaths, reporting all sorts of nothing-to-do-with-Covid deaths as Covid deaths (for example, dying from gunshots and traffic accidents).

However, don’t think that the preceding comments presage a mood of despair and continued failure.  In actual fact, the recent news has been generally very positive, as this article reports, and as the graph immediately below vividly shows. 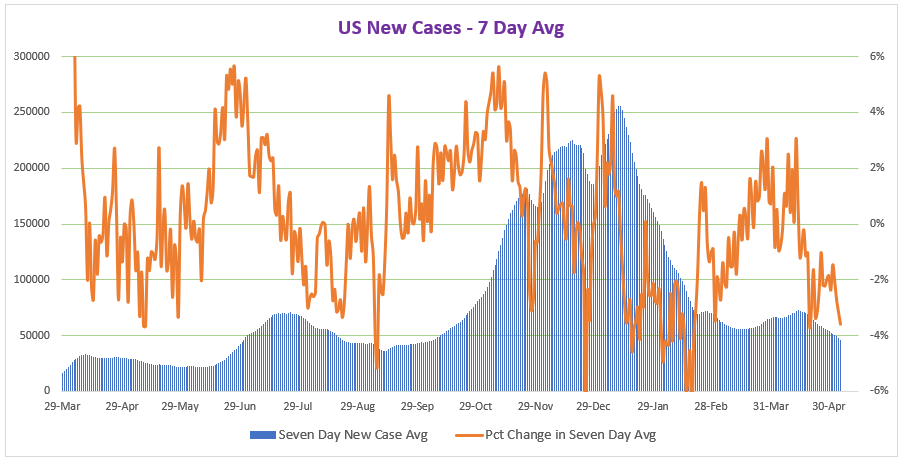 As you can see, the seven day average of new cases reported is now at a lower number than any time since 7 October last year – almost exactly seven months ago.  Cases have been dropping every day in a row for just over three weeks now.

This of course is not a surprise to you if you’ve been tracking my daily chart postings on Twitter.  And now, finally, the CDC is admitting that too, and went as far as to project a “sharp decline” in Covid cases by July, without clearly defining what that means.  That’s a sort of vague projection that is impossible to be wrong, isn’t it.

What a turnaround for the CDC.  It is barely a month ago that their Director chose to cry on national television while warning of “impending doom“.  If this is doom, could I have another portion, please.

But the professional worriers are never short of things to worry about, with their worry now shifting to the unwillingness of more people to be vaccinated (exactly as has long been anticipated, but apparently now a surprise to the professional worriers).  It is certainly a massive turnaround – from previously worrying that we had too few doses of vaccine and wondering if we should only give people one dose rather than two to make it go further (always a crazy idea, as this article most recently confirms).

No changes in US state rankings.

Estonia was pushed out of 10th place in the minor country list by its neighbor, Lithuania.  Interestingly, while both Lithuania and Estonia have around 94k cases/million people, the third of the Baltic states, Latvia, has only 65k/million.

Argentina displaced Italy at the bottom of the major country list, and Sweden is within a week or two of replacing the US in second position.

A couple of place swaps but no new entries in the death list.

Items below include three new drugs being developed to treat Covid, plus an inexpensive over-the-counter supplement that continues to show encouraging signs of combatting Covid too, how Covid can infect your brain, many more articles supporting ivermectin, and even one more supporting hydroxychloroquine, another hospital ordered by a court to treat their patient with IVM, medical censorship persists, a new vaccine progressing to approval in the near future, might we get vaccine booster shots by nasal spray and possibly even vaccines by tablet, a new form of Olympic sponsorship, it is easy to get a vaccine approved in Russia, a new look at vaccination rates and their implications, people’s willingness to “return to normal”, why don’t the airlines do something to reduce the cost of PCR testing at airports, more shortages, and why bee tongues are relevant to Covid testing.

Lastly, here’s an article that reads like an April Fools Day joke.  Who even knew bees had tongues….