I had a minor epiphany this morning.  I’d just finished reading an article about travel to Europe this summer seemingly becoming more problematic, and was looking at the chart below and the encouraging steep lines showing increasing vaccination numbers in both the UK and US (and the much flatter lines for other regions) and decided that it is likely to be feasible to consider travel to Britain but perhaps not to Europe, with later in summer offering a better probability of the least amount of possible confounding factors that is the case earlier in the season. 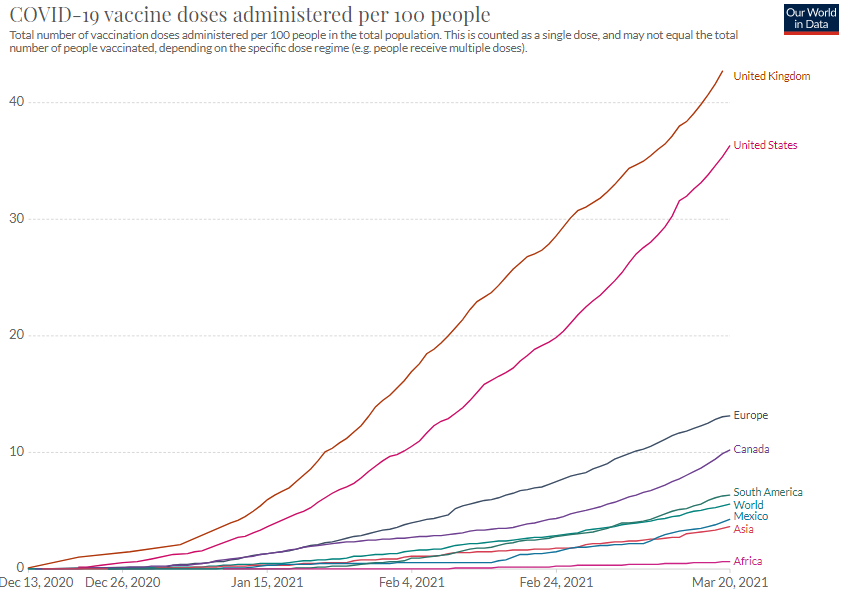 As a result of this epiphany, I’ve decided to offer three tours to Britain between mid August and mid September – my expectation being they are likely to be able to proceed and offer tour members a good experience.  The first tour is to Wales, the second to Scotland, and the third to England.  You can combine them if you wish, because the dates run consecutively after each other.  If you do both the Scotland and England tours, you also have a chance to do the famous “From John O’Groats to Land’s End” journey all the way from the south westerly point of England to the north easterly point of Scotland.

I’ll have detailed pages and itineraries up on these three tours later in the week, and wanted to mention it now because August isn’t really all that far away.

Yes, I’ll be limiting the tours only to people who can show vaccination certificates.  I’ve noticed this looks like becoming the standard practice for cruises these days, and while not an absolute guarantee, seems a prudent and appropriate measure to adopt.  Which I guess means I’ll have to step up and get the jab myself.  Well, I’ll wait another month or so for that…. 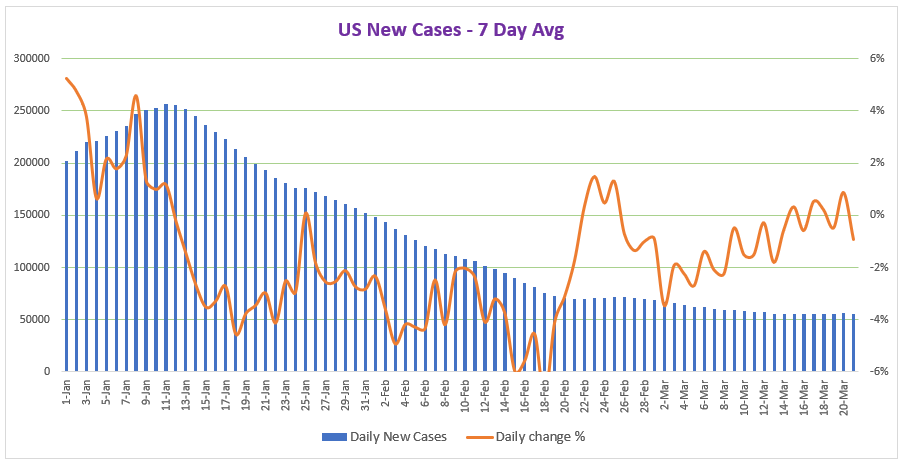 I’ve created a new chart.  As you may have noticed over the last few diary entries, I’ve been increasingly focused on our daily case rate – is it going up or down each day?  There were of course extended periods in the past where the answer to that question was very obvious, including the time, as you can see, from 11 January through to 21 February where there was a wonderful and strong drop every day.

But since 21 February, the changes have become more subtle.  Accordingly, I’ve created this new chart that shows two different sets of data – a seven day rolling average for daily new cases reported, and the percent change in that rolling average each day.  The second data – the orange colored line – shows very clearly when the numbers go above or below the 0%, more so than simply looking at each day’s bar line.

I hope this helps give you a perspective on what is happening from day to day in the US.  I’m still playing with the format of the data presentation, and once I’ve “locked” it in, I’ll start tweeting this every morning (along with the daily tweet on changing air passenger numbers).  You can follow my tweeting here.

There’s been a lot of talk about vaccination side effects over the last week or two – both in the concept of the extremely rare blood clotting side effect that may (or may not) be associated with the AstraZeneca vaccine, and more broadly in general.  Here, for example, is an article talking about how the side effects seem to be stronger after the second vaccination (if you’re taking a two-dose vaccine) than the first.

But there’s one thing that few if any of these articles make clear.  The side effects are vastly less unpleasant than a dose of the virus itself, directly!  Don’t let concern over side effects such as a sore arm or headache for a day deter you from the vaccination.

There were no changes in ranking in the US.

In the small country list, it is interesting to note that Gibraltar has now vaccinated its entire adult population.  That might seem impressive, but to put it into perspective, Gibraltar’s total population is a mere 33,684.  I see their case count is currently 4,270 (and 94 deaths), and has been at those numbers for several days, and it has moved down another place in the rankings.  It will be interesting to watch its numbers.

We also have a new country at the bottom of the small country list – Saint Barthelemy, a tiny island in the Caribbean with a population of 9,899 and a French “collective”.

Talking about France, it moved up a place in the major country list, as also did the Netherlands.

There were no changes in the death table.

Items below include another new anti-viral drug, this one being able to be taken orally, and a new vaccine being developed that can also be taken orally, Dr Fauci has gone in a year from being an anti-masker to now advocating two masks, even if you’ve been vaccinated, a look at the uptick in cases in Europe and South America, some of the US states with highest vaccination rates are also showing high new case growth rates, more on vaccine passports, plans for the Olympics, the US/Canadian border status, and disagreements about the value of vaccine passports.