The mystery of the plunging rate of new Covid cases has taken an almost amusing new twist.  Until now, there have been two parts to the mystery.  The first part is “Why are case rates falling so sharply?”.  The second part has been “Why are the ‘experts’ coming up with such laughably erroneous explanations for the falling case rates?”

The thing about the “official” explanations (better mask wearing, more social distancing, herd immunity, vaccines starting to help) is that they all require continued drops in numbers to be correct, or else a discernable change to the issue that is causing the dropping numbers.  Herd immunity and vaccination numbers in particular would require a continued steady drop in numbers, all the way down to almost zero.

This week has now seen four days in a row (Mon, Tue, Wed, Thu) with rising new case numbers being reported in the US.  One or two days might just be a random “blip” in case counting, with some cases counted in the wrong day, but four days in a row is starting to become a significant switch from falling to rising again. 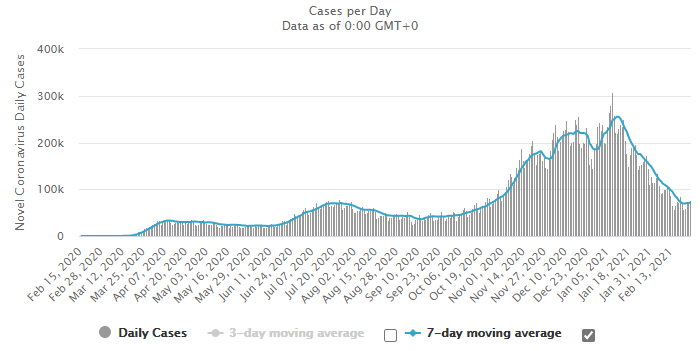 The rise is gentle, but it is still a sudden and drastic change from the steep fall that preceded it.

I find the rise less surprising than the fall for the five weeks previously, and wait with cynical amusement to see how the people who rushed out such ridiculous and now disproven “explanations” for the drop in numbers will now explain away their error and develop new theories for the new rise in numbers again.

And, as always, a question should be asked :  Which person who so egregiously showcased their lack of understanding of this matter will now be laughed at, ridiculed, and lose their job?

There’s a possibly related mystery.  Seasonal influenza cases are at unheard-of low levels this year.  Why?

You might think the answer is obvious – the same social distancing and mask wearing that we’re adopting for Covid will also reduce the spread of less-infectious other respiratory viruses such as ‘flu.

But that would be too obvious an explanation for “experts” who are trying to find some “cleverer” explanation.  They’ve come up with the concept that the coronavirus has “pushed aside” the ‘flu virus, although they’ve conceded they don’t understand how this could happen.

Why advocate an explanation that you can’t explain when there’s an obvious explanation that can be explained, staring you in the face?  The ‘flu has generally been thought to have an R0 rate of about 1.3, compared to about 2.5 for Covid.  So anything that reduces Covid even slightly is likely to also stop the ‘flu spread almost entirely.  This seems simple and obvious.

Our entire virus experience over the last year has been marked by unchanging levels of incompetence by people who are paid generously to be competent, and who still have their jobs a year later.  The latest examples include :

Not being allowed to tell people – or their doctors – if they have a new virus strain – no-one is allowed to tell anyone if they have been infected with a new variant of the virus or the “original” version, due to a confusion of federal rules about what data can be shared, and with whom, and also because the tests that are being used to determine what strain people are infected with haven’t been approved by the FDA.  (If the tests haven’t been approved, why are we using them?)

Yet another failed website – why is it that public officials seem incapable of arranging for functional websites to be developed and released on-time and on-budget?  This time, it is the Massachusetts Public Health Department website for scheduling vaccine shots, which is telling people they’ll have to wait up to 65,640 minutes before the website can process their request.  That’s a month and a half of waiting before the website might then advise when a vaccination shot can be scheduled.  A bunch of volunteer retirees with a large wall planner and old-fashioned phones for contact could do a better job, and probably for free.

The FDA continues to unfairly hate ivermectin.  Why?  It is now citing one suspect study as a reason not to enthusiastically endorse ivermectin.

Here’s the hypocrisy in this.  IVM-haters (and HCQ-haters too – usually the same people) demand the only studies that can be considered are random clinical trials, with double-blind subjects, and written up in a prestigious peer-reviewed publication.  If that’s the way they want to roll, no worries – there are plenty of those to choose from (something they conveniently overlook).

But now the FDA, in spreading some IVM-hate, is citing a non-peer reviewed retrospective study that was not a random clinical trial, about which little is known, which had differing end-points while it was being run, which has different demographics between control subjects and test subjects (test subjects tended to be older and male – more likely to suffer severe Covid cases), and which obscures or doesn’t even consider details of how people were chosen as test or control subjects or what doses they received.

It is an appalling example of a study and unconvincing in its conclusions.  The FDA would have laughed it away if the conclusions were positive, but because the conclusions are mildly negative, it is eagerly endorsing it.

Why did the FDA choose this one badly conducted study, while overlooking the 28 positive peer reviewed studies and 34 other non-peer reviewed positive studies?

How can we trust the FDA – about anything – when it is so obviously being unfair and wrongly biased in its approach to evaluating ivermectin now, and hydroxychloroquine previously?  What is the hidden item on the FDA agenda that is causing this inexplicable attitude?

Lastly in the opening remarks, we have a strange duality of willingness to accept risk.  During the last week, a 777 suffered an engine failure shortly after takeoff.  It landed safely with neither loss of life nor injuries, half an hour later, but as a result, all similar planes with similar engines have been grounded for inspections, “just in case”.  During that same week, 15,000 or more people have died from the virus in the US alone – the same number of people as in perhaps 100 planes.

Why are we calmly accepting 15,000 actual deaths a week, and over half a million during the course of the last not-quite 12 months, but panicking after an engine failure on an airplane with zero casualties?

While pondering that question, here’s a good article that tries to put the concept of half a million deaths into perspective.

In the US, Iowa has surged ahead of Tennessee in the case rates, and Rhode Island has pulled ahead of Massachusetts in the death table.

Aruba and Lithuania swapped places in the minor country case list, and in the death list, the Czech Rep displaced the UK and is now in second place, and shows the potential to move all the way to first place within the next week.

Items below include yet another look at the mystery of some countries being affected more or less than other countries, two new types of Covid test being developed, but neither seem to be what we most need, the airlines are finally agreeing to help with contact tracing, another promising virus treatment, Pfizer wonder if three jabs might be better than two, a dangerous new virus strain originating in California, a surprising dependency on supply from China, a third vaccine is about to be approved, plans for the future, and a move towards vaccine passports.

If you are truly desperate to be vaccinated, but can’t get one locally, Lufthansa have come up with a novel solution.  They’ve created a vaccination site, at an airport, in Moscow.  Take their flight to Domodedovo Airport in Moscow, where you can then be vaccinated without ever entering Russia, and then fly back out of Russia again immediately thereafter.  Details here.