Covid fatigue.  I think we all have a measure of that these days, but the solution is not to ignore the virus and pretend it isn’t there, but rather to double down in our efforts to rid us all of it.

Do the (as of Friday) two approved vaccines predestine the vanquishing of the virus?  Do they remove the need for continued and extra care and caution on our part?

No and no are the answers.  This is very different to how most people are joyfully perceiving the vaccines, and it is important to understand some points.

1.  Until you get the vaccine, you’re at much at risk as ever.

2.  Most people will not get the vaccine until perhaps the second quarter of next year.

3.  The vaccines, while claiming 90% – 95% effectiveness, lack statistically significant data about how effective they are for people in specific groups such as elderly and with comorbidities.  The claims of “works 100% for the elderly” that have been made seem to be based on a sample group of one (true!), and that person not being particularly old.  I think “elderly” is generally being applied to something like 55+ or thereabouts, and there’s a huge difference between someone in their late 50s and someone in their late 70s.

Even though the older you get, the more at risk of the virus you are, the less we know about how effective the vaccines might be.

4.  We don’t (yet) know how long the vaccines give us protection for.

5.  It seems the vaccines may still allow us to get a virus infection, but not to suffer any significant consequences from that infection.  But it also seems that possibly, if we are so infected, while not experiencing ill-effects ourselves, we can still pass the virus on to other people.  In a way, that is even more dangerous than at present, because we’re unlikely to realize we’ve been infected and become infectious.

Some swaps between states in both the US case and death lists.

Europe continues to take over the minor country list.

Bad news for the US in the major country case rate list.  For the first time ever, it is now in second place, although currently it is not gaining on the Czech Republic.

Returning to the theme of Covid fatigue, I’ve been very focused on getting my Covid book finished and into Amazon’s hands.  Early this evening, I finally finished the Kindle eBook (hopefully it will be available next week, I’ll let you know when), and now I need to finish the print version of the book too, so I’m a bit Covid fatigued and this will be a shorter than normal diary entry.

There are a couple of other items, and due to their brevity I’ll open them up to everyone rather than holding them for supporters only.  But I’ve a lot of material I’m deferring until Sunday’s diary entry, so supporters have plenty to look forward to then.  If you’re not yet a Supporter,  why not give yourself (and me too!) an early Christmas treat and become one, today, in time for Sunday’s bonus material. 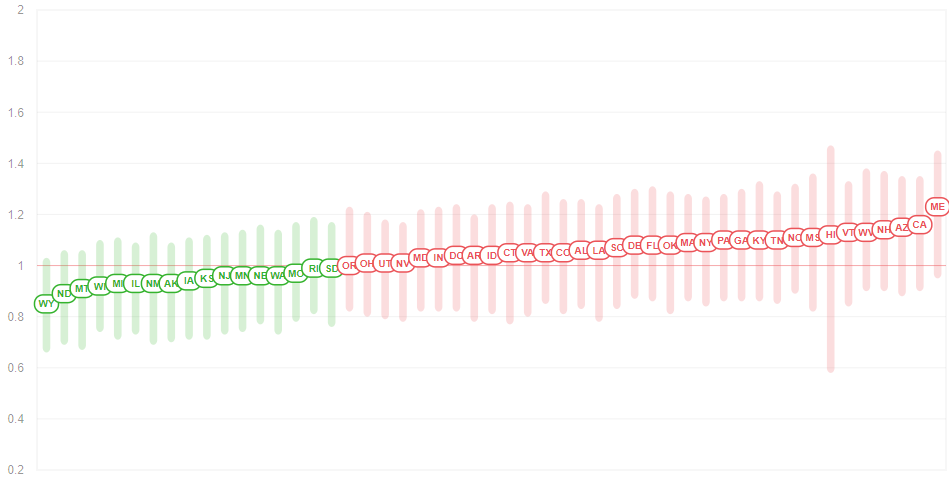 There’s been a weakly positive trend in terms of the number of states no longer suffering growing case rates.  After reporting 11 states with dropping case numbers on Sunday, that increased to 13 on Monday, 15 on Tuesday, 14 on Wednesday and 17 today.

Arizona and California have generally been the worst two states.

It is true that vaccine doses are not outrageously expensive, although it is also true that what the big pharma companies don’t make in margin, they’ll more than make up for in volume, with orders of potentially billions of doses, depending on how quickly the market splinters into more and more different vaccine alternatives.

Of course, as conventional wisdom goes, the companies need all the profit they can get to compensate them for the billions of dollars of development cost they’ve invested into these products, right?

Actually, wrong.  This article is fascinating, because it shows how extremely little of their own money the pharmaceutical companies have been investing to develop Covid vaccines.  The companies with the two largest development budgets (AstraZeneca, $2.23 billion) and Novavax ($1.58 billion) have had every last penny of their development costs paid for, either by government funding or not-for-profit foundation grants.  Two other companies (Moderna and Johnson & Johnson) have also had all their costs covered so far.  Only Sanofi has actually spent mainly its own money.