The expression “a slow-motion train-wreck” is often used to describe all manner of drawn out problems.  It seems like a perfect label to place on our US response to the coronavirus.  Look at these two charts, showing daily new cases and daily deaths in the US. 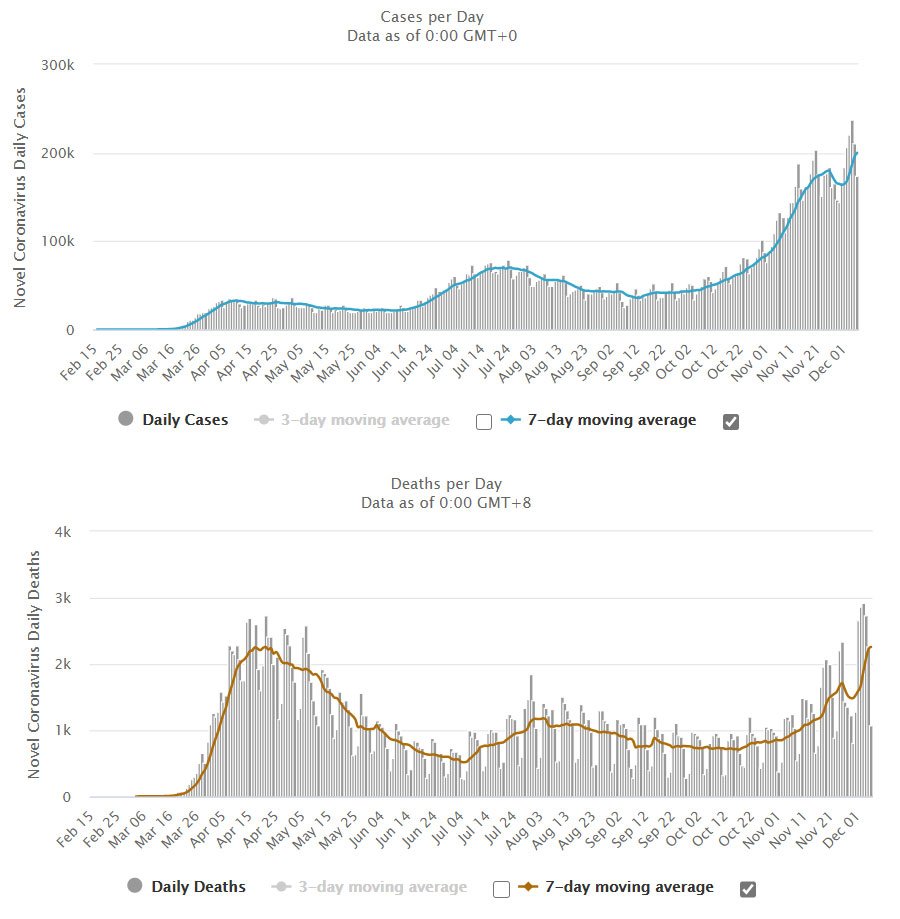 The thing I keep coming back to is that President Trump declared a national emergency to do with the virus on 13 March.  On that day, seven people died of the virus, making a total of 48 deaths since the count started in mid February.  Also on that day, 598 people were detected as having virus infections, bringing the national total to 2,285.  As you can see on the two charts above, mid-March essentially shows as zero on both charts.

Now, after nine months of emergency, how much progress have we made?  Deaths have gone from 7 a day to some days almost reaching 3,000 – two deaths every minute.  New cases have gone from 598 to now sometimes exceeding 200,000 every day.  Five times more people have died in the last nine months than died in nine years of the Vietnam war.

Ignoring micro-states, the US has the third highest case rate in the world, and the seventh worst death rate.

The pressure on hospital beds and ICU care in particular is 50% higher than in our earlier April peak.  There are now credible reports of ICU facilities having to ration space.  Think about that.  You’ve been careful and prudent, you don’t have Covid, but you’ve just had a heart attack or stroke, or perhaps been in a nasty auto accident.  All the ICU beds are taken by people who refused to wear masks, and who illegally met in large indoor groups to eat, drink, and defiantly have a great time, while claiming the virus was a hoax.

How do you feel about that?  You might die because of someone else’s stupidity – and not just because of the foolishness of the person in the ICU bed that is not available for you – also the inexcusable foolishness of “the authorities” to better control public behavior.  The sheriffs who refused to enforce mask wearing orders, the restaurants and bars that refused to close, and the politicians who refused to enact laws or add enforcement penalties to them.

Well, maybe we can cut those people some slack because they are either ignorant fools or venal politicians (see this article for the latest example of a politician who preaches to his electorate about the need to stay at home and not mix with other people, while doing the exact opposite himself.  He had just having hosted a wedding reception and then flew to Cabo San Lucas for a vacation, and sent his message out while vacationing there).

But what about the FDA, CDC, and assorted other federal, state, county and city public health services?  As you might personally know, the official line remains that if you become infected with the virus, there is nothing that can be done except self-isolate, drink plenty of fluids, and take it easy.  Only if things become severe (ie difficulty breathing) will most healthcare providers then start allowing you access to assorted treatments, with such treatments almost exclusively being very expensive and recently developed drugs.

This is crazy.  A virus is similar to a cancer.  Imagine if your doctor said “Oh yes, you’ve got a cancer, but wait until it reaches Stage Three before you come back and see us”.  As with cancer, the best time to fight a virus is when it is weak, before it has grown in numbers, before it has become almost unstoppable, and before it has started to harm you.

In my new book, I list ten different early treatments that have been advocated by various doctors, groups of doctors, researchers and public health authorities all around the world.  They are all very low cost, they have decades of history and demonstrated safety when being taken for other ailments, and many of them don’t even require a prescription.

Why are we not being told about these?  Sure, there’s no guarantee that, either alone or together, they’ll cure every virus infection in its early stages, but there are also no guarantees that once you’ve become so unwell that you’ve been rushed to a hospital, the many thousands of dollars in new expensive treatments will cure you, either.

These early treatments are like tossing a coin.  Heads – you win, and you’re cured.  Tails, you don’t lose – you’re no worse off than if you’d not taken them at all.  That’s an irrefutable and simple equation – why are we not all being told about this?  Even if they only spare half the people who are becoming infected, that would be saving 1,000 lives a day, reducing our ICU loads from overloaded/turning people away, to instead having spare capacity for other people with other types of emergencies, too.

It would cut the total cost to treat a patient from tens of thousands of dollars to just tens of dollars.  Don’t just take my word for it – here’s an excellent article by a physician who is also the Executive Director of the Association of American Physicians and Surgeons.

Now, for the action item in all of this.  With our healthcare system demonstrably failing and in overload, you need to do everything you can to avoid having to rely on it.  If you haven’t done so already, I urge you to download my book, to read through the 112 pages in Part Four (all about treating the virus), and to plan/prepare for what you would do if you became infected (read the 92 pages in Part Three to reduce your risk of infection, too!).

It will be too late to start your planning once you’re infected.  You need to have a plan in place, to already optimize your health and immune system, and to have the medical resources – supplies and a friendly physician – already at hand.

The life you save might be your own, or that of a loved one.

One last introductory comment.  If you’ve not already done so, can I ask you to participate in our future travel survey – please share your opinions about where you’ll start traveling once it becomes safe to do so again, and what will persuade you it has become sufficiently safe to do so.

There have been some interesting trends already in the answers to date, and I look forward to sharing the full findings in Friday’s newsletter.

No changes in US state rankings – they are all fairly evenly spaced out, and to indicate that, I’m now showing also the numbers for 5th best and 5th worst states.

In the minor country list, Slovenia appears for the first time.  In the major country list, both the Netherlands and Portugal move up a place, displacing two South American countries, and increasing Europe’s hold on the top positions.  On the death list, the Czech Republic debuted at tenth.

The rest of this newsletter is for the very kind Travel Insider Supporters – it is their support that makes all of this possible, and it seems fair they get additional material in return.  If you’re not yet a Supporter, please consider becoming one, and get instant access to the rest of the Diary Entry, to our 400+ page book on the virus, and much extra content on other parts of the website too.

If you’re a contributor, you should make sure you’re logged in, and when you are, you’ll see the purple text and balance of the newsletter below.  If you’re not logged in, or reading this via email, you need to log in on the website first.

Items below include two different vaccines being released and approved for use while major questions about what they can and can’t do remain, a related concern about if we choose one vaccine now, will we be able to “upgrade” to a better one later, an ill-fated pair of enquiries into the origins of the virus, both of which are looking in the wrong place (China) rather than the right place for the virus origins, continuing test shortages and the deaths resulting from them, and the consequences of lying about being infected prior to flying to Hawaii.