With all respect to the medical profession, they need to realize that some of us find it offensive when they choose to not tell us the truth, the whole truth, and nothing but the truth, “for our own good”.  The same when they lie “with the best of intentions”.  The supercilious “I’m a doctor, I know best” attitude is one they probably don’t know is parodied and disliked by most of the rest of the world.

The latest example of a doctor who feels that applying the lobster approach to the truth – slowly evolving the truth from “nothing to worry about” to “we should all panic” is the semi-sainted Dr Fauci – you know, the same Dr Fauci who laughed at the notion of ordinary people needing to wear masks, way back earlier in the year.

He is now modifying the percent of people who need to be infected or vaccinated in order to allow for herd immunity, and has been slowly raising the number from the earlier generally accepted number of 60% – 70%, and has now gone as high as 70%.  Depending on how you measure it, going from 60% to 90% is only a 50% increase, but it also means a four-fold reduction in the number of people who can be not-immune, from 40% to 10%.  It is a huge change.

The most peculiar thing is that the truth Dr Fauci is trying to “adapt” is not really a herd immunity truth at all, but rather a vaccine advocacy “truth”.  What he doesn’t realize though is that by admitting to lying to us, either then or now and possibly at both times, he is not helping get his message across and, the same as the oft circulated YouTube video of his interview when he dismissed the notion of mask wearing, he is now adding to the controversy and sabotaging both his personal credibility and that of public health officials more broadly with his mixed messages.  We relied on him to provide unimpeachable clarity.

Initially, Fauci was valued for “telling it like it is” and being a sometimes rare voice of clear reason.  Now, not so much.  That perception does neither him nor us any good, while making it easy for the anti-maskers and anti-vaxxers to taunt him and us.

In the US, Wisconsin has improved by two places in the case list and no longer appears.  South Dakota has pushed CT off the death list.

In the minor country list, Andorra now has had over 10% of its population with officially recorded cases of the virus.  Bahrain dropped three places on the list.

In the major country list, the Czech Republic slightly increased its lead over the US, and the UK reappeared in tenth place.

The US is down one in the death list, now at seventh again. 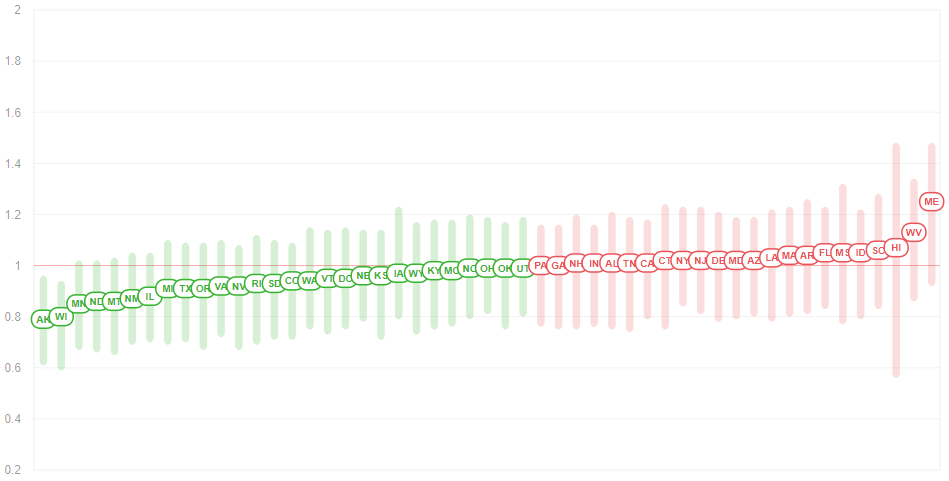 Does this mean there is no Christmas leap in cases?  No, it definitely doesn’t – it won’t be for another few days before those impacts start to be felt.  And, sadly, the most likely explanation is that state reporting organisations are working short shifts over the Christmas period and that cases are being underreported at present.

But it is still lovely to see more green than red on the chart.