First, some breaking news.  Close Trump confident, Hope Hicks, has tested positive for the coronavirus.  President Trump is going into isolation, and there are fears that VP Pence could be at risk as well.  Might Speaker Pelosi becoming acting President?  (And I’m not going to even ponder what that might mean for the current Supreme Court vacancy!)  Interesting times, indeed.

Even more breaking news, 10.15pm Pacific time.  President Trump has tweeted that he and Melania have both tested positive for the virus.  One thing is for sure – this will impact his perception of the virus.  If he has a minor case with no severe problems (which is my guess as I suspect he’ll be taking all the not yet officially approved treatments), he’ll be tempted to talk it down even more.  But if he has a severe case, one wonders how his attitude might change.

I’m delighted to have another major pre-release of my Covid book available for you to download here.  It passes two milestones – there are now over 100,000 words and 300 pages of content in the current complete draft.  I’ve released 262 of the pages today, including a major section that I’m sure you’ve been waiting for on medications.  There’s another major section on medications that needs to accompany the released section, and I hope to get that out on Friday or Saturday.

There’s also a quick “written to order” article on Covid-testing that I published earlier today.

One of the “Holy Grails” of this pandemic is achieving herd immunity.  Much nonsense has been spoken about this, with some commentators going as far as to suggest that Sweden, with less than 1% of its population having been infected, might have already achieved herd immunity.  That is totally wrong.

Generally it is believed that some percentage over 60% of the population needs to have been infected for herd immunity to “kick in”, although note that even in lower amounts, herd immunity can reduce but not stop the spread of infection.

Here’s an interesting article about Manaus in Brazil, which may now have had that level of people who have had the virus, and which has also had a puzzling (but gratifying) slow-down in new virus cases.  Has it achieved herd immunity?  Possibly so.  But Sweden?  Definitely not.

The usually overlooked and huge potential disappointment of herd immunity is that it might be short-lived.  Indeed, the article even hints as much when it says

During the month of June, a high of 40% of new blood donors were positive for coronavirus antibodies, though the number has decreased since then as antibodies tend to wane over time. ……  The blood survey clearly showed that with time, people’s antibodies become harder to detect. That could mean individual immunity to the virus is not permanent.

This is one of the two reasons we don’t believe seeking herd immunity is a sensible strategy.  It seems like it only lasts a short while.

The other reason?  Well, in the US, with just over 2% of the population now having been infected, it has cost us 210,000 lives to get to that point.  So to reach 60% (the low end of what is needed for herd immunity) would require a total of over 6 million deaths.  And, by that time, herd immunity would already be fading, so we’d need another cycle, and another 6 million deaths, and so on, in an endless series of repeats.

Israel is shooting up the minor country list.  It is being swamped with new cases.  For the last couple of days, its new case rate has been the same as if in the US we were running at a quarter million new cases a day (we’re presently averaging just over 42,000).

Argentina moved up two places on the major country list, and if things continue as they have been, Sunday’s diary entry will see Belgium back on the top ten list.

Brazil has moved one place up the death list and is now challenging Spain for fifth place.  Mexico has appeared at the tenth place.

Here’s a sobering reminder why we all need to continue to strenuously avoid the virus.  The need to avoid “Covid-19 fatigue” is stressed directly in this excellent article.

There’s been quite a bit of discussion recently about the chances of catching the virus as a result of a flight.  The good news is the chances are very low, but the bad news is there’s no way you can pretend that flying is as safe as staying home.

We agree with this claim – the chance of catching the virus on a flight is definitely less than 1%.  With an average of 741,000 people flying every day at present, and some of them flying two or more flights, it seems very unlikely that the US new virus count includes 7,410 or more recent passengers every day.  That would trigger alarms and create headlines.

A couple of items of possibly good news.  There is a new cure being developed that would be a nasal spray which could stop the virus from replicating.  And another possible treatment, using an existing widely prescribed drug for diabetes, metformin, is also about to be trialed with initial promising potential being displayed.  Metformin is a wonderfully inexpensive treatment, and very safe; let’s hope it works.

Here are a couple of interesting articles about the travails associated with the AstraZenica vaccine candidate.  Although its trial has resumed in the UK and India, it remains on indefinite hold in the US.  The cynic in me observes than an indefinite hold can end up being unexpectedly short as well as extensively long.

Here’s an article that we all hope is true, although as described, the trial is only weakly persuasive.  But if correct, it seems that Vitamin D might reduce ICU admission for Covid patients 25-fold.  Vitamin D is starting to be recognized as potentially a big thing, and one of my favorite websites has now opened a tab to track the growing number of positive studies about Vitamin D.

Here’s an interesting new vaccine going through the trial process – an inhalable one.  As a trypanophobe (a person scared of needles) I’d certainly much prefer an inhalable vaccine.  I hope it succeeds.

Trump haters delighted in this story and its headline – a survey shows that only 19% of Americans would be likely to take a new Covid vaccine if President Trump said it was safe.  Be that as it may (and we don’t know how many would be persuaded by an endorsement by Joe Biden…..), the most alarming thing to me was that only 62% of respondents said they’d trust their doctor.

There are lots of reasons why people might choose not to trust an endorsement by President Trump (even though he has been so correct when it comes to HCQ) and probably half the country automatically disbelieve everything he says.  Want to boost membership in the Flat Earth Society?  Get Trump to marvel on how amazing it is that the Earth is spherical.  🙂

But how is it that nearly half of all Americans no longer trust their doctor?  That’s the real issue that should see the medical profession doing some soul searching. 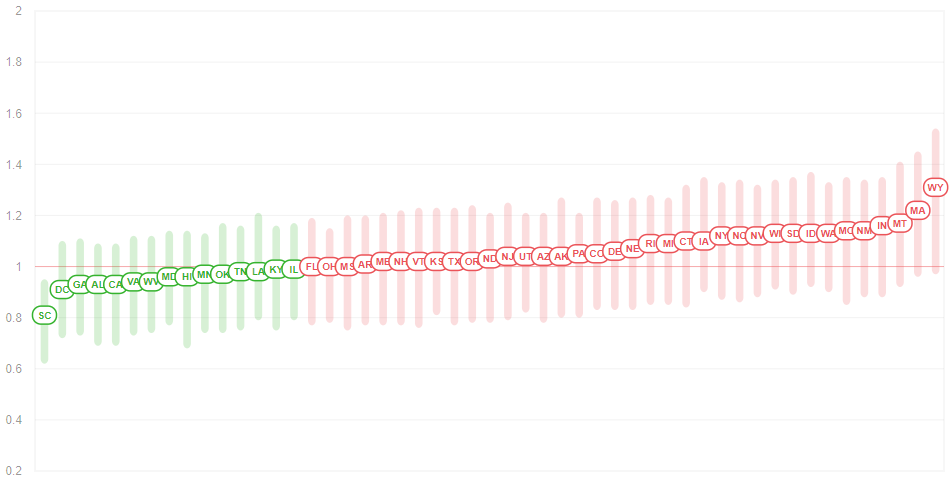 The number of states with declining new case rates continues to get worse.  It was 21 on Monday, then reduced to 20 on Tuesday and Wednesday, and then plunged down to only 15 today.

Wyoming has been consistently showing as the state with the most serious rate of case number increase this week.

Ooops. The cruise lines keep trying to restart cruising, and the virus keeps defeating them.  The first restarted cruise of the Greek islands ended up with 12 of the 150 cruise members who were administered virus tests showing as positively infected.  With a total crew of 666 (an unfortunate number), that suggests possibly in total, over 50 crew had the virus during the cruise.

As has been mentioned before, probably not all passengers understand that the new “safe” approach to cruising will be rather joyless.  They’ll not be allowed off during port stops, unless they agree to go on an official shore tour, and can never break away from the tour group to do their own thing.  So, an over-priced shore excursion, with even less to see/do/enjoy than normal, and no ability to do your own thing – not all that appealing, is it.  I understand the reason, but that doesn’t make it any more pleasant.

It seems in the US the cruise lines have successfully lobbied to limit the latest extension of the CDC’s ban on cruises.  According to this article, the CDC had wanted to extend the ban, which was set to expire at the end of September, until February next year.  By any and all measures, this seems sensible and appropriate.  But VP Pence refused to agree, and they’ve only been allowed to extend the ban through to the end of October.

I’m not sure that really is a victory for the cruise lines.  What are they going to do?  Urgently start “hotting up” their ships and readying them for cruises starting 1 November, and start advertising to fill their cabins with brave passengers?  But the reality is there’s a very strong chance that late in October, the CDC will be able to extend the ban again, and after the election is over, hopefully it will be possible to get further and longer extensions of the ban.

A one month extension with no guarantee of what happens come 1 November is, I suggest, a worse outcome for the cruise lines than being told to keep their ships laid up and crews laid off for another five months, which remains the most likely eventual outcome.  Advertising cruises, taking bookings, preparing ships, rehiring crews, then having to undo it all again later this month serves no good purpose whatsoever.  It unsettles potential passengers, and wastes millions of dollars.

Perhaps the cruise lines ended up scoring an own goal with this “victory”.