Death rates however, in the US, are remaining surprising stable, although with about a three week lag between cases and deaths, it is not clear if this is just because of that lag.  It is also fair to observe that with the continued puzzling phenomenon of the “symptomless sufferers” – which some people wonder are due to testing errors rather than reality – the actuality of the case rate numbers remain unclear.  But we are starting to get reports of hospitals getting full again, so clearly even if death rates are remaining stable, there are growths in moderate and severe case numbers. 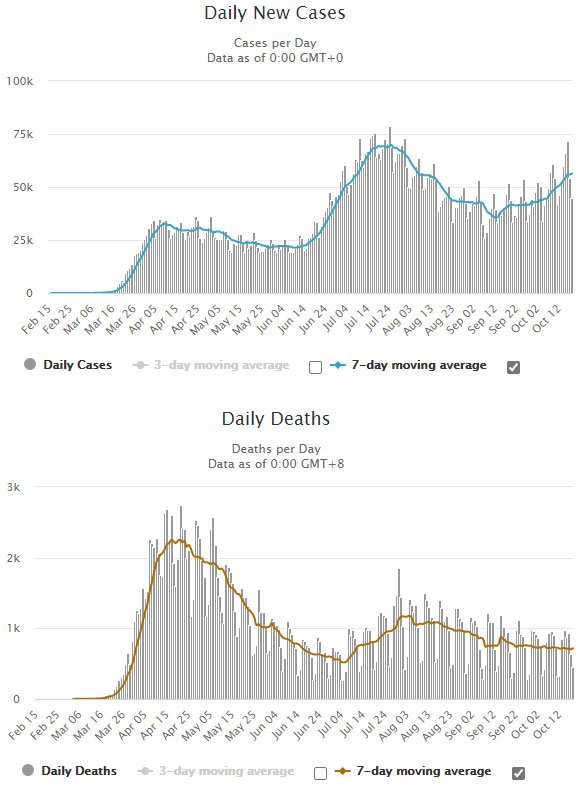 As always, my view is clear on this.  While, for sure, I’m happy to see the death rate drop, I want to reach further back in the disease cycle and see the hospitalization rate drop, too.  Hospital stays are massively impactful in terms of scarce and costly (medical) resources and patient experiences.  We need early treatments to keep people out of the hospitals and avoid the more severe symptoms.

The Vatican City had one more case, affirming its continued prominence in the minor country table.  There were no changes since Thursday (but some since last Sunday) in the major country table.

Brazil and Spain swapped places in the death list since Thursday, and Bolivia happily dropped from 3rd to 5th.

It is amusing and almost pleasant to see remdesivir now getting an official thumbs-down, albeit only from WHO (after the ill-deserved adulatory hype it earlier received).

WHO coordinated a large group study to trial the effects of a number of different “anti-viral” type drugs, with remdesivir being one of them, hydroxychloroquine being another.  All of them showed neutral or possibly even slightly negative outcomes, but the confidence intervals were so wide that all the results are statistically meaningless, making the entire major effort, involving 405 hospitals and 11,266 patients an utter waste of time.

It was not a surprise that most treatments had no major impact, because – as anyone with any medical training should know – antivirals are most important during the early stages of an infection, not in the late stages after hospitalization.  But the trial didn’t test early stage infected patients, only late stage.  Why did WHO design a test program that was destined to fail?

However, it is surprising that remdesivir didn’t show any measurable benefit in that environment, because it was deemed best for later (but not late) stage patients as a result of its earlier but inconclusive US trial study which earned it an Emergency Use Authorization.

We all surmise that a large part of Trump’s eagerness to get a vaccine prior to the election is because he felt it would give him a more upbeat story to enhance his electability.  He might even be right about that linkage – New Zealand just had a general election, returning the current major party to power with a greater majority than in a long time, in what many commentators are viewing as a “reward” for having managed the virus problem so excellently.

But the irony of Trump’s failed push to get a vaccine approved prior to 3 November is that the pressure he brought to bear on the companies developing vaccines is such that people actually feel the opposite – they are not at all eager to get a rushed vaccine asap; they’d rather wait for all due diligence to be complete prior to approval.

In truth some elements of the Warp Speed program deployed by Mr Trump’s administration have been sensible and positive.  But we have a sense that 3 November will not see any tangible thanks or appreciation at the ballot box for the totality of this administration’s handling of the virus situation.  The US remains, as you can see from the numbers above, the country with the third highest rate of cases and the 8th highest rate of deaths.

I guess the American public will therefore be pleased to see that Pfizer appears to be in no rush to apply for vaccine approval, although is hinting that it might have one ready to request approval for by late November. 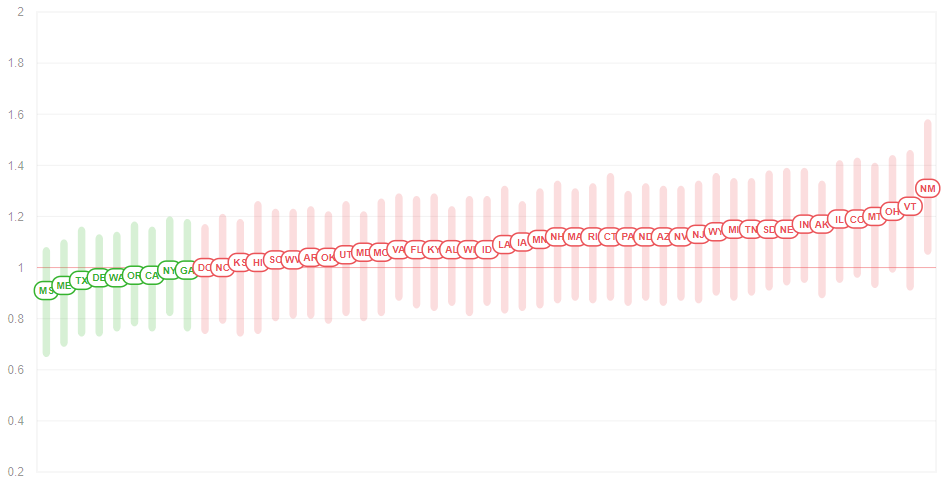 On Friday we had only seven states with dropping case rates, then Saturday dropped still further to six, and today we are up at nine states.  As you can see, congratulations to Mississippi, Maine and Texas, and not quite such happy thoughts to New Mexico, Vermont and Ohio.

The first cruise departing from a US port is now scheduled for 18 December – a two night cruise from W Palm Beach to Freeport on Grand Bahama Island.  You might wonder about the dubious sense of restarting cruises while our case rate numbers are soaring back up to crisis levels once more, and I certainly wonder about that too, but I guess if you’re a cruise line, there comes a point where you just have to cross your fingers and hope.

Suffice it to say, it isn’t only the cruise line operators that would need to cross their fingers.  So too would the passengers (and crew) on the ships.  About the only good thing to say is that with a short two night cruise, the chances of anyone catching the virus while on board is lower than on a longer cruise, and even if someone does get infected, they’ll be well off the ship before becoming infectious themselves.  Which has a happy side-effect of making it easier for the cruise line to deny they had any part in the process!

About the only thing sillier than a two night cruise to Freeport is a 75 minute “flight to nowhere”.  Actually, we do understand the appeal of “flight seeing” – that’s not silly at all.

But marketing and describing the flight as a way for desperately-starved-of-flying-experiences air travel enthusiasts to get a “fix of flying” is beyond ridiculous.  This article waxes lyrical with purple prose such as “Thirty seconds into the flight, I already felt like I was holding my breath. I found myself thinking of my late grandmother, who grew up during the Great Depression and didn’t fly on a plane for the first time until she was in her thirties.”

However, we did admire the upbeat way the writer described the lack of food or drinks – “There was no food or beverage service — easier to keep masks on that way”.

If you really want to go see a movie, but don’t want to risk sitting in a public indoor theater with hundreds of other people, AMC now has a deal for you.  Hire your own theater, for your own private screening.  For about the same price as half a dozen regular tickets (or more depending on movie and theater size) you get to have your own theater, all to yourselves.  That is $99 and up.

This weekend my daughter and I had to decline an invitation to go to a friend’s place to watch a movie “en famille” – their six and us two.  Anna and I both felt the risk too high.  But we could hire a theater for less than regular ticket prices, and seat the eight of us around the theater, well spread out.   And eat popcorn rather than home cooked snacks.  Of course, it isn’t quite the same social experience, but maybe it is an interesting compromise for next Saturday night!

And lastly this week, if things get much worse, maybe we will have to go to this level 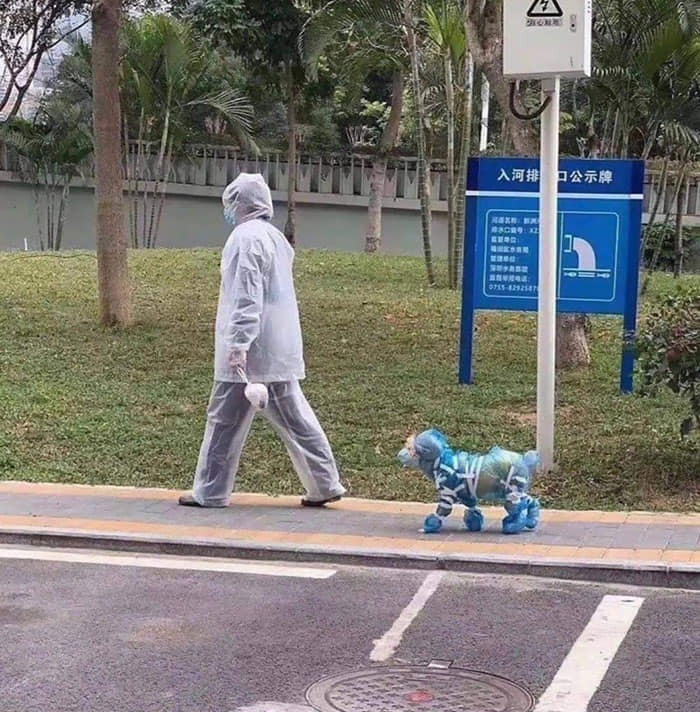