On Tuesday evening the US passed through the 200,000 death count and now on Thursday evening has 202,213 deaths.  On Wednesday afternoon, the world exceeded 30 million cases.

The US case and death rates are both starting to trend upwards again.

Spain had its most cases ever in a single day on Thursday, 11,291 – that would equate to 80,000 in the US after adjusting for population sizes.  The maximum we’ve ever had is 78,684, so at present, Spain is now suffering a greater new case load every day than we did at our worst.  Spain’s second worst ever day was Wednesday (11,193) so it seems this wasn’t a one-off anomaly.

Israel is now in the top ten minor country list.  There were no changes in position at all in the major country list and just a couple of position swaps among South American countries in the death list.

I think there have been other recent studies about how the virus can get into one’s brain, which makes this latest such finding not an outlier and alarmingly more likely to be true.

On the good news front, there’s news of a new type of medication to help patients fight the virus in the earlier stages of an infection.  That is nice – it is much more impactful and beneficial for people and the healthcare infrastructure to keep them out of hospital entirely.

But the experimental new treatment still has a long way to go before there is robust confirmation of its potential, and it is uncertain, if it is confirmed to be beneficial, how quickly a supply of the drug could be made and distributed.  I also note a total silence in this article about what the treatment might cost.  (Unlike HCQ, now with 102 studies, 76 of them positive, an abundant supply, and a cost for a course of pills of less than $10.)

Bill Gates (he and I, and one of my readers too, all share the same birthdate – but, at least so far, he hasn’t invited either of us to his upcoming 65th birthday bash) is expressing concern about both the CDC and the FDA, wondering if the FDA can be trusted to oversee the vaccine development program.

That’s very strong language from a man who has tried to be “part of the solution rather than part of the problem” and to work with rather than against the established players.  We agree with his concerns, although we’re less likely to exonerate them and transfer the blame on to President Trump.  “Just following orders” didn’t work for the Germans after WW2, and shouldn’t work for people we literally trust with our lives now, either.

Here’s an interesting article about the man almost entirely and solely responsible for Sweden’s very laissez-faire approach to the virus and lack of most social distancing and other controls.  Was (is) it a great idea or a massive blunder?

So it would seem hard to say that it has been an outstanding success so far.  As for the other part of that equation – economic harm – that was the justification for a lack of controls – protecting the economy.  It is interesting to see that Sweden’s drop in GDP is very similar to the other three countries, so its greater case and death rates haven’t earned it any saving of economic harm.

Here’s an article that cites (and links to) a Harvard study that puzzlingly talks about a 1% risk of infection on a flight.  We’d be astonished if there is a one in 100 risk of getting infected on a typical flight at present.  But maybe it is correct – it would suggest about 6,800 people being infected every day from flights.  In total the US is experiencing about 40,000 reported new cases every day, so the number is far from impossible.

There has been a slight improvement in the number of states with declining rates of new virus cases, although still more than half of all states have increasing rates.  On Sunday there were only 18 states with declining cases, that grew to 20 on Monday and Tuesday, 24 on Wednesday, and 22 today. 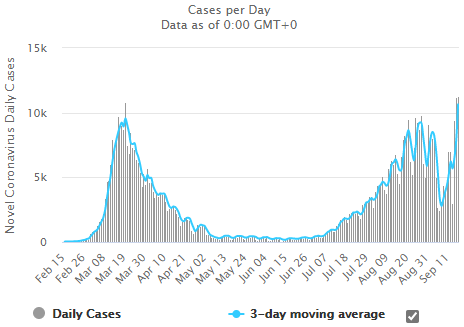 We mentioned above that Spain is now suffering the worst rate of new daily cases ever.  The same situation is threatening to happen in France, and many other European countries are experiencing uncomfortable growths, even before summer has finally finished.

We’re not surprised by this.  But what did and still does astonish us is how Europeans, in June, were declaring victory over the virus, claiming they’d won the battle and vanquished the virus.

How could political and public health leaders be so ignorant of reality?

No-one, nowhere, will beat the virus until we have a vaccine that works or an effective cure.

We mentioned the possibility there might be a very high 1% infection rate among people on flights at present.  It is interesting to read of Boeing and United doing research into how viruses spread on planes.

We wonder if they’ll share all details of their methodology and the raw data from their studies with us, or just utter platitudes about it being very safe for most passengers.  We also wonder why, until four months ago, the airlines’ typical response whenever the possibility of diseases spreading on planes was raised, was to just deny such a thing could/would happen.

Sure, there’s a lot of difference between catching a common cold and Covid, but even so, the airlines that claim “the comfort and safety of our passengers and crew is our highest priority” might have done a little more research at any time in the last 50+ years on that point, don’t you think.

A new twist on the never-ending argument about mask wearing – using a snake as a mask.  It mightn’t make a very good mask, but for sure, if I saw a  person with a whopping great big snake wrapped around their neck, I’d keep a lot more than 6′ away from them!