There have been a couple of dismaying milestones in the last few days.  India now is reporting over 90,000 new cases in a single day.  To put that number into context, only 34 countries in the world have more than 90,000 cases in total.  After two days (180k cases) only 23 companies have more cases, and after three days (270k cases) only 19 countries have more cases in total.  India has now overtaken Mexico and has the second highest number of cases in the world, with only the US having more.

Of course, let’s not forget that India has a population of 1.38 billion people.  Only China is larger.  Talking about which, if we are to believe China’s stated number of virus cases, India has more cases every day now than China has reported in total (85,122 cases).  So India is still way down on the case rate per million people, but quickly climbing that list too.

The other milestone no longer seems all that unusual.  The world total case count passed through another million mark on Saturday (27 million).  It will be over 28 million by the time I write Thursday’s diary entry.

A positive milestone, too.  Earlier today I published a new pre-release of my Covid-19 book, now with the working title “The Covid Survival Guide”.  The first 181 pages are now available in pre-release form for Travel Insider Supporters – they still need more editing, but the overall manuscript is starting to take shape.  I’m targeting a 1 October release on Amazon.

The major new section added is about managing your risk in a workplace environment.

The Vatican City is now not only no longer on the top ten list of minor countries, but has dropped down to 13th place, and with Israel rising rapidly to challenge it for that position in the next week.  (No, I’m not going to riff on the thought of a “battle” between Israel and the Vatican!)

Brazil continues to catch up with the US, and the two are now very close in case counts – 19,496/million for the US and 19,440 for Brazil.  We should pause to think about those numbers for a minute – 2% of the US population has now had a recorded case of Covid-19.  One in every 50 people – including some Travel Insiders.

Spain is now back up to sixth place.

Brazil is also climbing up the death rate list, while Sweden continues to drop.  The US is inching closer to Italy, and maybe within a week will have passed it.

It is truly tragic that the topic of hydroxychloroquine remains controversial.  Lives are being needlessly lost every day.  The scientific peer-reviewed evidence is overwhelmingly supportive of using the drug – this site shows a massive preponderance of positive articles in favor of HCQ.  Its opponents necessarily ignore all the positive studies and focus in on one or two negative studies, also ignoring the flaws invariably present in such negative articles and their flawed findings.

Here’s an excellent commentary on the matter by a Yale Professor of Epidemiology.  I was particularly convinced by his point about what happened in Switzerland when it stopped generally administering HCQ, and then what happened again when it restarted, and all his points are excellent.

Here’s another study on another possible treatment – Ivermectin, which seems to be slowly gathering steam and acceptance as an encouraging drug to use in early case treatment.  Fortunately for us all, President Trump hasn’t mentioned this drug and so there’s less of a clamor to turn our backs on it.  The linked study isn’t the most rigorous or convincing of studies, and if taken alone would not be strongly persuasive, but it is in line with other studies and so strengthens the case for ivermectin.

And here’s a puzzling story about a “mystery” drug.  Favipiravir was briefly a subject of great hope, but seemed to then fade away again.  The linked article wonders why that was.

Talking about mysteries, here’s an article on the topic of espionage and spying in the race to be first with a vaccine.  We don’t mind so much the spying, what alarms us most of all is another element of this wild and crazy race – the potential to cut corners and cheat.

There’s no part of the traditional testing/trialing process that reassures me at present, and most of all the supposedly largest and most extensive part – the stage three.  With the refusal on “moral grounds” (it is claimed to be moral to allow people who don’t want to die to die; but immoral to allow people who wish to volunteer for a “challenge trial” to see if a vaccine works to allow them to do so) I don’t see how we can know, for sure, how well a vaccine works.  It would be possible, with more time and more test subjects, to observe some general shifts in case rates between the test subjects and other people (like the Swiss experiment with HCQ), but in the compressed timeframes we are accepting and the smaller sizes of trials and test subjects, I don’t know what degree of accuracy/certainty will be possible – if any at all.

About all we can say at the end of the stage three trial is that none of the test subjects have (yet) had massive alarming side effects.  The only measure we’ll have about the efficacy of the vaccines will be empirical, based on measuring antibody levels in people’s systems.  But the researchers then have to make a totally wild-assed-guess that the tested antibody levels will correspond to effective protection against the virus – a virus that is proving to be unimaginably wily in every relevant respect so far.

We are confusing action with outcomes, and have pretty much created a situation that guarantees the first vaccine to pass the finishing post will not be the best vaccine.  There are about 150 different vaccines moving through the development and validation process – shouldn’t we wait a bit longer to see and compare the outcomes of several of the finished vaccines rather than snatch the first one that is available?  Rather than rushing to get a vaccine out by 1 Nov or 31 Dec or whenever, the government should take a deep breath and say “the best vaccine available on (some specific date in 2021) will be the one we choose”.  That way, companies might shift their current focus from being first to being best.

Isn’t that really what we want?  In the meantime, let’s liberally distribute HCQ, Ivermectin, and assorted other treatments.  🙂

Talking about distribution, the task of distributing a vaccine may be non-trivial, due to the two leading candidates both needing to be kept at very low temperatures – one of them requiring a storage temperature of -4°F and the other one requiring an extraordinary -94°F.  A typical home freezer has a temperature of about 0°F.  It could probably be cranked down to -4°F, but -94°F requires a very special type of cooling.

This article details the challenges.  It suggests using solid CO2 blocks to maintain the -94°F environment in transit.  The thing is that CO2 sublimes from solid to gas at -109°F which gives the CO2 only a little temperature differential to maintain -94°F.

We’re doing worse, again, on case numbers.  After 25 states with reducing levels of daily new infections on Thursday, five more states switched to positive rates of case number growth again on Friday, and we’ve stayed at that point for Saturday and today as well. 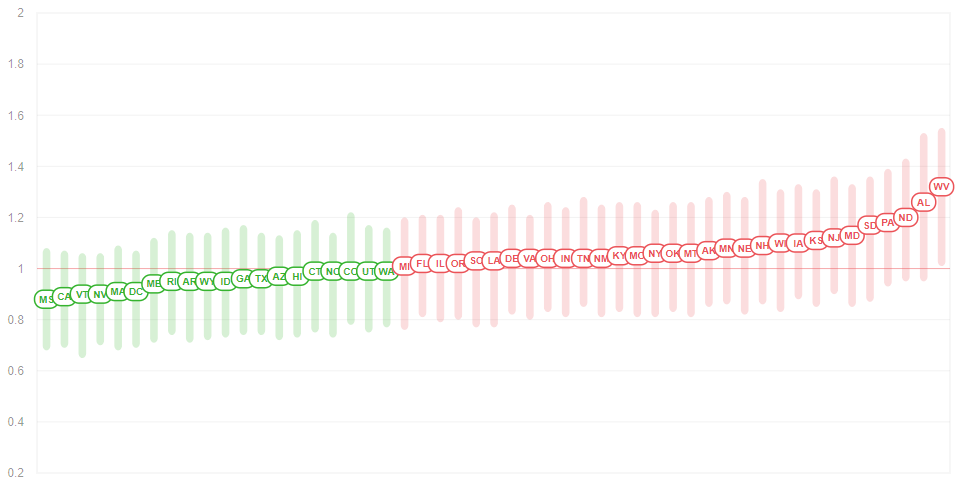 South Dakota has slipped from the state with the worst new case rate, and went to second on Friday, third on Saturday, and now fifth on Sunday.  That’s not altogether surprising, as the ripples in case numbers caused by the Sturgis motorbike event are now starting to smooth out again.  But SD’s decline from worst state is not so much due to any major improvement of its numbers.  Rather it is because other states are getting worse.

Here’s a very surprising news item – Mexico is having so many Covid deaths that it is running out of death certificate forms.  So how many Covid deaths a day is this country of 130 million people reporting?  The last week has seen an average of 500 – that’s unfortunate, but compared to all deaths in Mexico every day (is this the point where I make a comment about drug gang shootings?) it hardly seems likely to cause the country to run out of death certificates.  Don’t they have a photocopier?  Can’t they PDF print some more?

As I’ve said before, it is necessary to look at case rates not in total but in terms of cases per million population.  Only that gives undistorted measures of actual case prevalence in a country.

And if you’ve found some value in this update (and the 125 previous ones) please consider joining with your fellow Travel Insider readers and becoming a Travel Insider Supporter.