Sunday morning saw the global death count from Covid-19 break through the one million count.  209,453 of those deaths were in the US.  Yet still some people claim the virus is a giant nothing-burger and best ignored.

For sure, we all desperately hope that might be the case, but the basis of claiming the virus is weakening is extremely tenuous.  It is possible – I’d go as far as to say probable – that people are now getting tested for the virus sooner, and getting admitted to hospital sooner, than was the case in April.  If that is so, with people getting tested at an earlier stage of an infection, it is totally to be expected that the tests would show weaker viral loadings.

What can ordinary people think and do when the experts we rely upon can’t agree between themselves on such vital points of understanding, and when they base their interpretations on such thinly supported data?

Israel continues to climb rapidly up the minor country list.  The major country case rate showed no changes from Thursday, and only minor from last Sunday.

There were no changes on the death rate list, although we note that Mexico is now very close to displacing Italy and entering the list at number ten position.

This is relevant because increasing alarm is being sounded about one of the leading candidates, the AstraZeneca/Oxford vaccine.

Can we really trust the people who can’t agree whether the virus is getting more deadly or less deadly, or whether the virus can be spread by aerosol or not, to be able to agree among themselves – and correctly – as to the best vaccine candidate?  Can we really trust CDC and other personnel who have shown themselves to be susceptible to political pressure to now do the right thing, no matter what their political masters might be asking?

The combination and potential outcome of an increasingly murky and non-transparent vaccine testing program, a greatly compressed testing schedule, and totally secret decisions about which vaccines to choose all sounds terrible.

Here’s some more positive news about the growing acceptance of favipiravir in other countries.  It is strange it is not getting more recognition in the US.

And some information that now starts to answer the question of how it is that ivermectin may be an effective treatment.  It is one thing to observe a positive effect, but it is much more reassuring when you can rationalize and explain the reason for it.  Again, I’m surprised that ivermectin isn’t getting more publicity and consideration, too.  Eleven years ago ivermectin was being hailed as a wonder drug, but when it comes to using it to treat Covid-19, there’s little mainstream coverage or consideration.

That’s a nice cocktail of low-cost treatments.  With the exception of the enoxaparin which needs to be injected (but not into a vein – it comes in self-injecting syringes for the braver among us to inject, ourselves), the other treatments are all simple tablets.  So, again, while big pharma advocates its expensive multi-thousand dollar treatments for the seriously sick patients, less costly treatments that might prevent patients from becoming seriously sick are being developed by “real” front-line doctors, and then overlooked.

So, we have vaccine development being done in secret, HCQ farcically condemned, even though the continued drumbeat of studies continues to show its efficacy, and other early interventions like ivermectin or the ICAM process in the previous link being largely ignored. That just doesn’t seem sensible to me.

Talking about sense, something I can agree with is giving a one year prison sentence to a man who repeatedly refused to stop hosting banned parties.  Well, to be more nuanced, it is terrible the US incarcerates more people per million population than any other country in the world, and very regrettable this man had to receive a one year sentence, but when a person refuses to follow the law, what can one do?  In this case, at least, the blame is not on “the system” for needless incarceration, but on the offender, for his unfortunate refusal to conform with the law.

Apple recently released new iPads and a new Watch.  The new Watch includes a blood oxygen sensor.  But does it give an accurate reading?  That is a fairly important question, because blood oxygen levels are normally in the 97% – 99% range, and below about 95%, that becomes cause for alarm.  So there’s a very narrow range between “enough” and “not enough”, and even a small 2% – 4% error in measurement could change a 97% or greater reality into a 95% or lower reading.

This article suggests the readings may not be of high quality.  Fortunately, a separate pulse oximeter can be had for $25 or less.  So, if you get a new Watch 6, you might want to also get a pulse oximeter.  If the Watch suggests low blood oxygen, double check with the pulse oximeter before rushing to the emergency room. 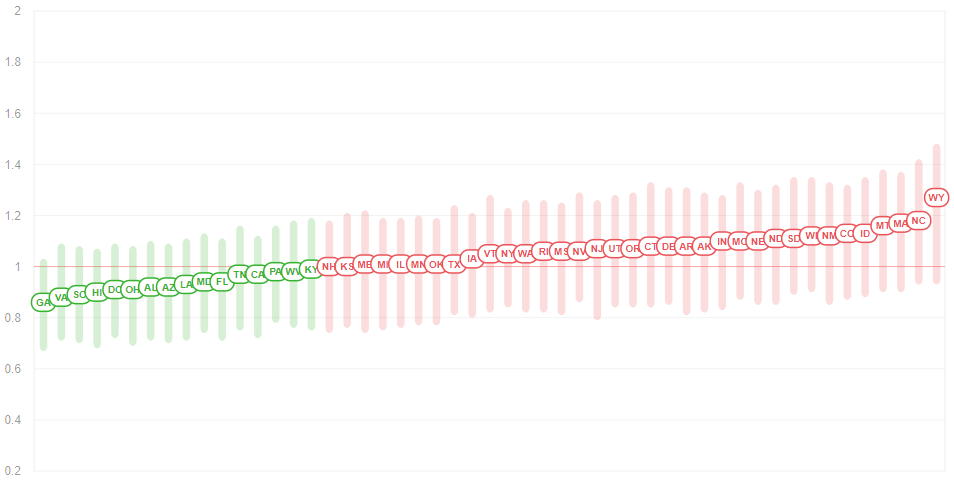 The number of states with declining new case rates gets worse and worse.  It was 18 on Friday, then dropped to only 16 on Saturday and again today.  Over twice as many states have growing Covid counts.

Here’s a meaningless scare statistic that doesn’t actually mean much or help anything.  Someone at the CDC chose to count 1600 flights between January and August where at least one infected person was known to be on board.

Two responses to that.  First – was it really only 1600 flights?  I’ve no idea what the total number of flights over that time was, with flight numbers going down and up drastically over that period.  But I’ll guess about 1.5 million flights within the US (6,000 a day).  So only one flight in 1,000 had an infected person on board?  That seems very low, and perhaps suggests how inadequate the CDC’s tracking/tracing routines are to understand where infected people have been.

If the CDC number is correct (and I’ll guess it to be something like ten times too low), and when you think about all the people on each flight, the odds of you getting the virus on a flight end up as very low.

The second response is who really cares what happened months ago.  Your only real concern is your risk exposure over the last week or so.  Prior to that, anything that is going to happen has already happened.

So we’re not sure why the CDC chose to release a statistic that could be wrong by as much as a factor of ten.  It just makes them look stupid, and gives us a false sense of boosted confidence when it comes to air travel.

Talking about looking stupid (something the CDC does an impressive job of doing at present), here’s a great explainer about why some of the earlier Covid-19 projections and predictions have been so very wrong, how they work, and the reasons for thinking they might be better now.

I wrote about a supermarket chain in the UK now rationing toilet paper and disinfectant again last week.  That chain – Morrisons – has been joined by mega-chain Tesco, who are also now rationing these items – although we are expected to believe they are doing so not because they need to, but just in case there are future problems.

As a counterpoint, here’s a Wall St Journal article telling us not to worry, the supermarkets and food suppliers in the US are all gearing up to be sure we have no problems here.  But, strangely, looking at the actual substance of the data they provide in their article, and seeing the preponderance of items being below normal inventory levels currently, I feel totally unreassured and more alarmed.

But I was reassured by a friend in Canada who says he can buy facemasks at Costco for C$7.32 for a pack of fifty.  That’s a great price, hinting at improving availability.  Now might be a good time to stock up on supplies prior to what threatens to be a rather gloomy winter.  If you’re not in Canada, I see Costco has them for $12.50 – $15 in the US, and Amazon has them from $10 and up, as does also Walmart.

Have you been in a hotel recently?  This article reports on a recent hotel stay and the writer says he didn’t like it and won’t be going back to hotels any time soon.  That’s not good news for the hotel industry.

Here’s an interesting article about the problem with getting contact tracing apps that are effective, not too intrusive, and likely to be widely used.  This is a huge oversight in the US.  Shouldn’t we, as the high-tech capital and innovative center of the world, be leading the world with the best contact tracking/tracing app?  That would massively reduce our virus spread and allow us all to start mixing and mingling with increased safety and confidence.