The US passed through the 7 million total case count earlier today, and it seems case numbers are starting to rise again.  But our increase is nothing like what is happening in Europe.  Compare these two charts – the top one being the US and the bottom one being France. 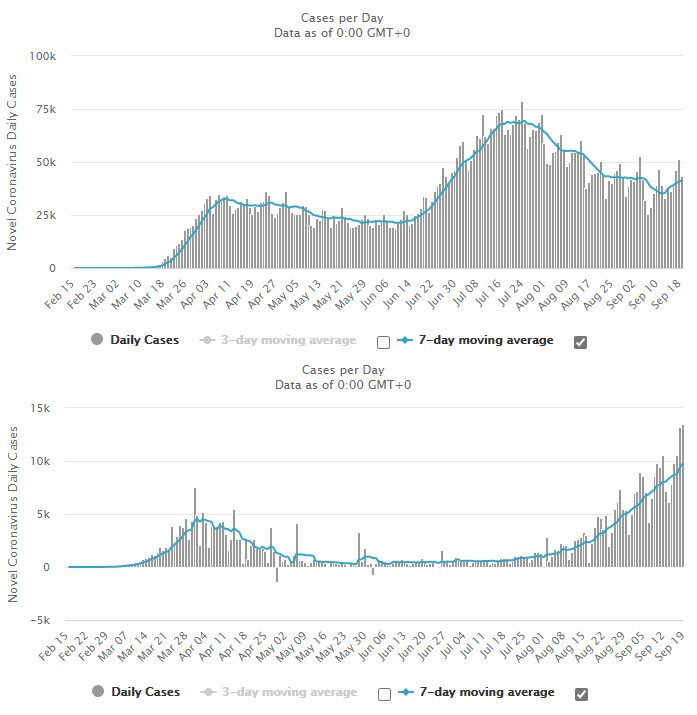 France’s new cases are now at twice their April peak after an extended dip in May, June and July.  We’re seeing similar patterns in other European states.

The inexplicable issue is why did these countries relax their controls, and then for over a month passively watch as numbers steadily increased?  There was panic when new case numbers were at half the level they are at present back in March/April; why the calm acceptance now?

The virus is like a car rolling down a steep hill.  Put your foot on the brakes, and the car will slow.  Brake hard enough and it will stop.  That much is easy.  But countries like France are in effect saying “now that we have slowed our car, we don’t need the brake any more” and have taken their foot off the brake.  So, as sure as the car, going downhill, will speed up again, so too will virus numbers increase.

Is this complicated?  Is this surprising?  No and no.  So why are these countries now acting astonished and puzzled at the increase in virus numbers, and creating the scapegoat concept of an inevitable second wave for the growth rather than their own failed public health policies?  The only inevitability is the consequence of their easing up on their controls.

Israel continues its steady rise in the minor country list.  Bolivia inches up the major country list.  And the US inched ahead of the UK in terms of death rates, while Chile dropped two places.

The obvious problem is how it makes ongoing outbreak control more difficult.  What are the chances of getting wild animals to wear masks?  To have our pets “socially distance” from us?  And so on.

Another transmission vector may be appearing, too.  This study approaches the problem positively by suggesting that maybe wearing glasses might help protect against catching the virus.  That’s good to know, but it begs the question – how/why are eyeglass wearers protected?

There are two possible ways that glasses help.  The first is by making it harder for people to touch/rub their eyes with their (possibly infected) hands.  The second is to block off contaminated air from making contact with the eyes and tear ducts and allowing the virus to enter our body via that route.

The study is only weakly persuasive – it was based on a small number of observed cases, it doesn’t consider other factors, and it doesn’t distinguish between touching or airborne type infection.  But there seems to be a possibly significant difference in infection rates between people who wear glasses all the time and people who don’t.

Does that mean we should start wearing goggles?  The study doesn’t tell us.  But if I was going into a “high risk environment” for an extended period of time (ie an airplane flight) I’d definitely wear safety glasses or goggles (safety glasses being a more discreet approach).

Talking about lengthy flights, here’s an interesting new article about disease transfer on planes, focused primarily on a ten hour March flight between London and Hanoi.  It seems that during the flight one already infected person managed to pass the virus on to 15 other people.

We assume that no-one was wearing masks back then.  But even so, it is a higher rate of infection than the airlines have generally expected and advised us about.

I made a specific point on Thursday of advocating not to attend a virus-party and deliberately get infected.  I sense a growing fatalism in more and more people which is why I felt compelled to say that; another “more scientific” form of this same fatalism can be seen in articles such as this one that muse openly about allowing herd immunity to “save the day”.

Sure, the article is headed “Why a herd immunity approach to COVID-19 could be a deadly disaster” but it doesn’t do a good job of adequately explaining why while giving too much prominence to the concept of actually allowing herd immunity to be achieved.  Never mind that if we waited until reaching herd immunity conceivably as many as 6 million more people might die in the US.

That would surely be a bad thing, but it isn’t the worst thing.

The worst thing is that there’s little or no credible reason to believe that herd immunity is going to happen with Covid-19, just like it isn’t a factor in the common cold (which is a similar virus).  At best, we might get three – six months of post-infection immunity, but that is all.  So, not only would we suffer 6+ million deaths to achieve herd immunity, but we’d have to continue to suffer another 6 million deaths to renew our immunity 3 – 6 months later, and so on every additional 3 – 6 months.  In other words, we’d have nonstop people dying, 1 – 2 million every month, continually into the future.

Does that sound like a good idea to you?  It sure doesn’t to me.

The other point the article is – to my mind – too optimistic about is a belief/hope that a vaccine will confer longer lasting immunity than a direct infection.  That too has not yet been substantiated, and is a creature more of desperate hope than scientific certainty.

On the other hand, vaccines continue to advance through their various trials, so much so that both China and Russia were pressuring Egypt to choose one of their vaccines for Egypt’s own trials and more general use.  All four vaccines (two each from Russia and China) are far from conclusively proven.

This article describes the growing awareness that T-cells are an important part of how our bodies successfully fight off the virus.  I don’t understand enough to comment on the implications, but it seems that most of the vaccines are all about antibody defense rather than T-cell defense.  If antibodies are becoming a less pivotal part of how our bodies win against an infection, what does that mean for vaccines?  Is that part of the reason why there are such low hopes for vaccine effectiveness rates?

So maybe we all should start drinking bleach?  No, please!  That was a joke, but sadly, some people are enthusiastically doing exactly this.

There’s been little change in the number of states with growing or shrinking virus numbers.  On Thursday there were 22 states with dropping numbers, then 21 on Friday, 22 on Saturday, and again 21 today.

As you can see, WI is currently the worst offender, and both HI and TX are showing strong daily reductions in cases.

Here’s an article which I find offensive in the extreme – not because it mentions the Democrats in a possibly negative context, but more generally.  On the other hand, the article is accurate – the virus has somehow become a political plaything, on both sides of the political divide.

Maybe we should have formed a wartime coalition some months ago – perhaps that would have prevented quite such a vast chasm opening up?  But the thought that either side should be either racing to get a possibly inadequately tested vaccine approved for election benefit, or delaying a vaccine’s progress and approval process, also for election benefit, seems terribly wrong.

Will our country ever regain consensus driven politics?  Neither outcome in November seems likely to bring us back together.

Hawaii is yet again cycling to a positive view of its future, and so is about to commit the same problem it did before, and may be ignoring my analogy of what happens to a car on a hill when you take your foot off the brake.

It plans to drop its two week quarantine requirement and instead charge people flying to HI $140 for a pre-trip virus test that must be taken within the 72 hours immediately prior to flying to HI.

Now you and I immediately see the flaw in that program.  Tests only detect infections some 2 – 4 days after infection, so if that test was done three days prior to travel, that means the test is not reporting on the three days after it was taken, and potentially the four days before it was taken, either.  So there is a mystery week of status that the test is silent on.

That’s a loophole the virus will waltz right through and immediately attack HI again with the same gusto as it has before.  The last time it was nearly free of the virus, it relaxed its controls, and the virus numbers soared way higher than they’d ever been before (as you can see above)

And now, with virus numbers still pretty much at the level of the first peak, the state is optimistically choosing to consider its virus problem solved.

As for the number of people looking to go for a one week trip to Hawaii and willing to pay another $140 each for a virus test, well, that $140 ($280 for a couple, etc) is an appreciable additional cost factor and will definitely see some people choose other “sea/sun/sand/surf” destinations instead.