President Trump says that the FDA and possibly various other regulatory bodies are slow-walking the progress and approvals for vaccines until after the election.

I don’t disbelieve the accusation of slow-walking the approvals, but I’m not sure that is entirely a bad thing, and “slow-walking” for something that is being done five, maybe ten times more rapidly than normal is clearly a relative term.  Who among us wants a rushed-to-market vaccine?

On the other hand, are politics the reason behind the deliberate lies and distortions about hydroxychloroquine – a drug claimed by the main stream media to have no proven benefits and to be too dangerous to trial any further, but a drug also claimed, by its supporters, to have been shown to have proven benefits in every one of 28 trials using it as its advocates suggest, in all 12 in vitro trials, and even in 30 of the 58 trials for late treatment, which is not a recommended use of the drug by its supporters.  (See statistics on this page.)

All we hear about are the 28 late treatment trials where it did not work, not the 70 other trials where it did work.  And the speciousness of the statement “too dangerous to continue to test/trial any further” fails to pass the laugh test – this is the tenth most prescribed drug in the US.

If it isn’t too dangerous for other ailments, what unevidenced magical X factor makes it too dangerous for Covid-19?  As far as I can tell, no-one has ever died from HCQ when used as a Covid-19 treatment, in any of the many countries in which it is used.  What I don’t know, though, is how many of the 181,000 US deaths from Covid-19 could have been prevented by early efficacious use of HCQ (and also how many lives have been saved by judicious use of HCQ where it is permitted at present).

It seems clear to me that the overwhelming evidence supports HCQ.  Why are we not handing it out to all who ask for it?

Here’s another drug that demands further research and study.  I’ve written about it before – ivermectin.  It is a pre-existing drug, on the WHO List of Essential and Safe Drugs (just like HCQ), and being used to treat other diseases with no side-effects.  It is also an extremely low-cost medicine, which some medical experts are suggesting is why no-one is interested in or promoting it.  Why is the US government (and others too) spending tens of billions to pay up-front for and subsidize the development of vaccines that have yet to prove themselves, when there are off-the-shelf medicines, already proven as safe, which are crying out for testing and validation and then to be used to help fight the Covid-19 infection.

Interestingly, it is Democrats who are simultaneously expressing horror about the Covid-19 death toll in the US but also most likely to be opposed to allowing HCQ use to save lives.  That strikes me as an irreconcilable pair of attitudes.  I was surprised to see the huge division on how the death toll, so far, is perceived.  To my dismay, 57% of Republicans viewed our deaths so far as being acceptable, compared to only 10% of Democrats and 33% of independents.

Aruba appears in the top ten minor country list for the first time.  It seems likely to displace Vatican City shortly too, but then it is a larger gap from there to Oman.

Peru has inched ahead of the US in the major country list, and Brazil is catching up with the US too.

Every day, public health authorities are in a race against time, competing against the virus.  The race is to find out who is newly infected and to get them to self-isolate (a win for us) before the virus has incubated and become infectious (a win for the virus).

We can only win that race with easily accessible fast testing that gives us near-instantaneous results.  Time is very much of the essence.  There is only two or three days between when an infection can be detected in a test and when the infected person is infectious and able to pass it on to others.  Waiting three days is too long to get a test result back, waiting a week is beyond ridiculous, and as for waiting two weeks, as many are in the US, well, I’m not sure how to comment on that.

There has been some good news this week about fast testing.  Apparently the 1% are already using rapid (ie between 10 – 30 minutes) testing when visiting each other and attending parties in the Hamptons.  I say this is the 1% not only because of it being the Hamptons, but also because the tests are being charged at $500 each, which seems an unsupportably high fee to charge.

I certainly know that if I were to hold a party here in the Seattle area, and even if I were to offer free food and drink, a $500 test fee up front would reduce the number of attendees down to zero!  Details here.

More encouraging is this device, although details are not yet to hand about the time a test takes, or the cost of it, but it seems likely that both the time will be reduced and the cost, too.

I mentioned recently that Delta is now testing its employees almost on a daily basis, and you know for sure they’re not paying $500 for each test!

I’m aware of some other devices also in the process of being finalized, and it seems this is an area where progress is finally starting to be made.

Fast testing is part of winning the race against the virus.  The other part is contact tracing – being able to quickly identify the people an infected person has been in touch with, both to back-trace where he got the infection from, and then forward trace other people the person who infected the tested person may have also infected, and lastly to trace people the tested person may have already infected, too.

My fellow-countrymen in New Zealand have come up with an interesting device that they are proposing should be distributed to everyone in NZ, to make contact tracing semi-automatic.  It is not quite perfect, but much better than nothing, and rather than do nothing while trying to come up with “perfect”, it seems appropriate to at least get something deployed.

The cost would be about US$15 each, or perhaps less if made in a quantity of hundreds of millions.  While that might seem very high (ie say $5 billion for the entire country) that is less than one thousandth of what the government has already spent on inadequate and insufficient compensation for the harm we’re all suffering at present.  (But would the USPS be able to distribute them quickly, one wonders…..  why is it the Postal Service is so efficient at distributing junk mail, but not so good at first class mail?)

Here’s an article that cites a great rule of thumb to use.  If you’re sufficiently close to a person that you can/could smell the smoke if they were smoking, you’re close enough to be breathing their virus particles, too.  That’s a rather sobering illustration of the actual safe distances required, and a demonstration of the inadequacy of the 6′ rule of social distancing.

Which brings up, by implication, the vexed issue of masks.  Here’s an interesting article about a fabric development in Israel, and here’s another article on another type of anti-virus fabric.

I’ve been saying for a long time that we need standards and ratings on masks.  Significant improvements in mask materials such as these two developments need to be highlighted so that we can all make sensible selections when choosing masks.

The excellent rt.live site showed 32 states with shrinking rates of new case numbers on Thursday, 33 on Friday, 32 on Saturday and 31 today.  That’s not quite the direction of progress that one would hope for.

Talking about not quite the direction of progress, the excellent projections from IHME have been updated twice in the last few days, and now are predicting 309,918 deaths in the US by 1 December. 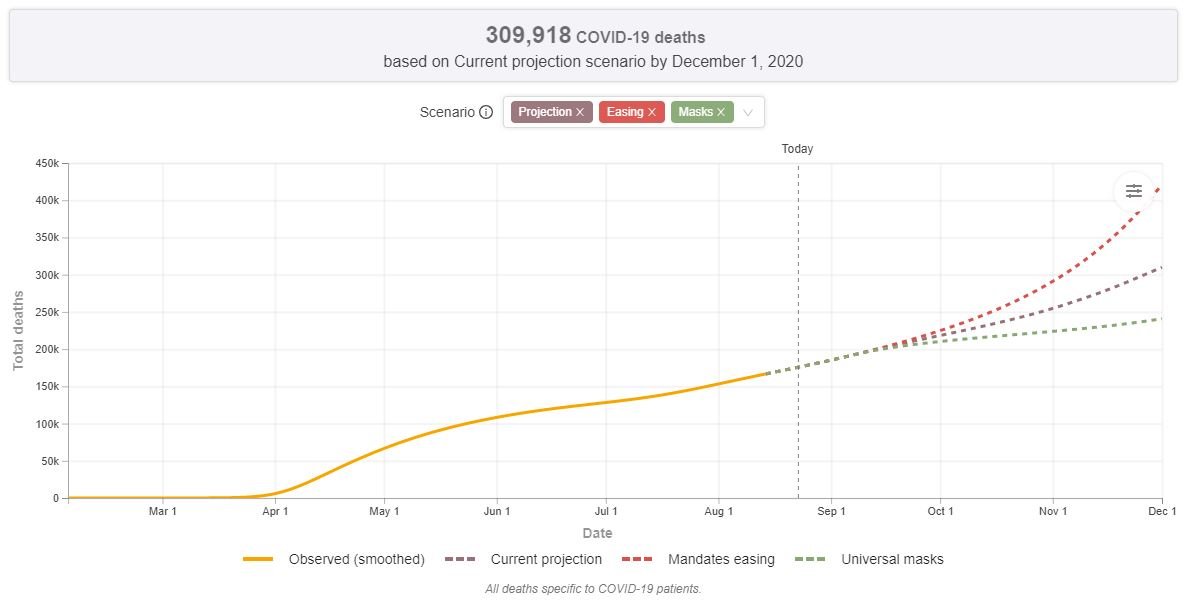 The most significant (to me) point of note in their projection is that better mask use would see the deaths reduce down to 241,000 – a 68,000 reduction in deaths over the next 3 1/2 months.  Why is everyone not obsessing about mask use?

The other significant thing is to note that the death line is largely staying steady at around 1,000 new deaths every day, but towards 1 December, it rises to 2,000 deaths a day.  That’s a far cry from getting the virus under control.

Please stay happy and healthy; all going well, I’ll be back again on Thursday, and of course, updating the major PDF document at least once again before then.