I hope your Saturday was a pleasant celebration of America’s Independence and all that is great and good about this wonderful nation, its heritage and its accomplishments.

But for sure we can’t celebrate our “accomplishment” when it comes to controlling the coronavirus. 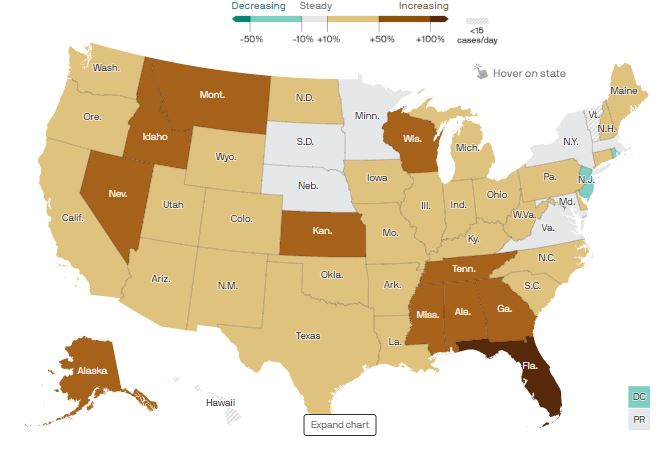 As this map shows (and more details here), 48 of the states are reporting either flat case numbers or growing case numbers.  Only CT, NJ and DC have declining cases.

My sense is that our political leaders have just given up.  I can not understand how states that were anxiously closing when virus rates were much lower, three months ago, are now eagerly opening, even though virus rates are at all time highs and climbing.  Either we shouldn’t have closed before, or we shouldn’t be opening now.

I read (sorry, no link) that President Trump is planning a new “slogan” about the virus – rather than promising its elimination, it is suggested he might be about to shift and now say we need to learn to live with it.  Certainly, when one reads this article quoting the Surgeon General, it is clear that he (the SG, not the Pres) has totally abdicated all leadership and interest in the situation.  He doesn’t want a nationwide mask mandate because it would be counterproductive and cause rebellion?  And he refused to say whether people should attend large gatherings or not, saying “every single person has to make up their own mind”.

Where is the leadership and education/encouragement in those statements?  He has given in to anarchy and concedes there is no way to prevent “rebellion”.

We need a Surgeon General who will boldly try and shape opinion, rather than run away from it.

The number of in cases in Qatar is truly astonishing – they have 35,543 cases per million – 3.55% of their population has been infected (that they know of).  Their new case rate is of course declining, as it is almost everywhere except the US.

The second highest country in the world is tiny San Marino (population 34,000) with a rate of 20,571 cases, and then comes Bahrain – even though right next to Qatar, its case rate is half with 17,261 cases per million.

Two bits of good news for hydroxychloroquine in recent days.  First was the release of an encouraging study from the Henry Ford Health System.  While not a fully rigorous trial, the results were very encouraging and seems to suggest that HCQ halves the mortality rate in patients.

If you read the actual trial write-up, you’ll notice that testing HCQ together with azithromycin seems to bring about a worse result than HCQ by itself.  If you dive deeply into the fine print, you’ll see that is because they only used both drugs on the most severely ill patients, and when adjusted for severity of illness, it seems that HCQ + AZ is better than HCQ by itself.

The surprising omission from this study was no mention of zinc.  HCQ supporters maintain that adding zinc is an essential part of how this possible cure works.  So it was even more pleasing to see that HCQ seemed to clearly work even without zinc.

The second bit of good news was that the incredible fools at WHO have now decided that HCQ is useless and dangerous, so they have stopped all further testing with it.  From what I’ve seen, if you plan your life around doing the exact opposite of what WHO says, you’re probably ahead of the eight ball more often than not.

Talking about WHO, here’s another example of them being dead wrong.

The excellent rt.live website continues to show more growth in new case rates.  On Friday, it showed 39 states with accelerating rates of infection, on Saturday and again today, it was showing 40 states.

In quite the opposite of normal news, people crossing the US/Mexico border are now being prevented from doing so by Mexico.  Mexico is seeking to stop Americans from entering Mexico, because of the higher rate of virus cases in the US (specifically Arizona) than in Mexico.

Maybe – who knows – Mexico might truly end up building a wall and even paying for it!

Some people believe that better access to testing is an important part of controlling the virus, with the assumption/hope being that if a person knows they are infected, they will act responsibly and self-isolate so as not to infect others.

That’s not exactly a new discovery.  There have been calls for – and promises of – better testing availability dating all the way back to March.  The reality remains almost as distant now as it was then.  Many/most of the tests currently in use require the test samples to be sent away to a lab for processing.  This means there can sometimes be as long as five days between a test being taken and a result being received – an unthinkable delay both because of its terrible inadequacy and its equally terrible inefficiency.

It also makes some types of travel unnecessarily inconvenient.  Some countries now allow international visitors, but only if they have been tested for the virus within three days of traveling.  That’s not going to work if your results are taking four or five (maybe even more) days.

As for the five days, why so long?  Don’t the health authorities use overnight couriers?  Are the results communicated by snail mail rather than email?

The really frustrating thing is there are plenty of ways we can test and get results much more quickly.  Why is no-one seemingly doing anything tangible to resolve this?  As I observed at the beginning, it seems that most people with key roles to play have just given up.